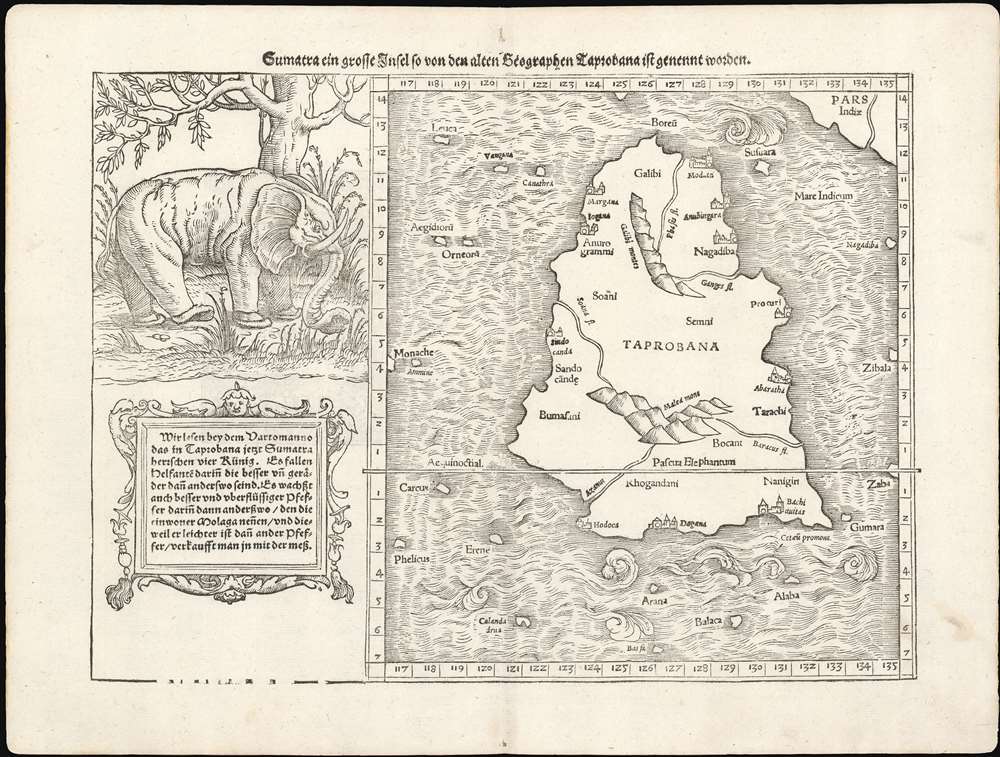 The legendary island of Tapobrana!

This is Sebastian Münster's 1574 map of Sumatra - using the Ptolemaic model for the map of Taprobana, which earlier mapmakers typically conflated with Sri Lanka. The map is oriented to the north and includes all of ‘Taprobana’ with a nineteen surrounding islands. The mainland of the appears above and to the right, which would correspond to the Malay peninsula were the map correctly identified with Sumatra, although this map roughly identifies to Sri Lanka's tear shape. To the left of the map is a naturalistic illustration of an elephant and ten lines of text describing the pepper trade - explicitly identifying the island as Sumatra. In doing so, Münster is differentiating himself from earlier cartographers whose versions of this map reproduced Ptolemy's map by rote - though he adds no new specific data to the map, his innovation is in the application of a specific modern interpretation of the ancient geographical data.

The first mention of Tapobrana is in the Geographia of Claudius Ptolemy. Today, Ptolemy's Taprobana is considered by some scholars to be entirely mythological and by others to be a wild misinterpretation of either Sumatra or Sri Lanka. Whatever the case may be, the island was mentioned by Marco Polo, who describes is as an enormous landmass:

This led many early cartographers to over-map the island, exaggerating its size and importance. To give this map some scale, the line running horizontally through the center of this map is the Equator (Aequinoctial), meaning that Munster's Taprobana extends from the southern tip of the subcontinent south well beyond the equator - a factor that would make it nearly as large as India!

Munster issued two maps with a prominent elephant engraving, the present map and his map of Sumatra. It is no mistake that both maps are associated with the Ptolemaic island of Tapobrana, the pepper trade, and yes, elephants. Munster's elephant first appeared in this 1540 edition of this map, to the left of Tapobrana / Ceylon. In 1588 Sebastian Petri made a new map, reassigning the historic Tapobrana to Sumatra, and accordingly transferring the elephant to the new Sumatra woodcut plate. Munster's elephant is both innovative and unique. Unlike most 16th century representations of wildlife, Munster's elephant is presented within the context of its natural habitat, surrounded by jungle trees and other rich foliage. Other cartographers, including Girolamo Ruscelli (1500 - 1566) and Giocomo Gastaldi (c. 1500 - October, 1566) followed his example on their own Tapobrana maps.

This map first appeared in Sebastian Münster's 1540 Geographia Universalis, and was reissued in all six editions of that work. The present example is from the 1574 Petri edition of Münster's work of modern geography, Cosmographia : Beschreibung aller Lender . Oddly, it appears in only six German editions of the many that were produced of Münster's influential work. Consequently it is one of the scarcest of his double-page maps. It was replaced by a completely new block in all editions from 1588 onwards.

Munster, S. Cosmographey oder beschreibung aller Länder (Basel: Petri) 1574.     The Cosmographia Universalis, one of the greatest geographical and historical works of the 16th century, 'taught nearly three generations of laymen most of what they knew about the world beyond their native places' (Strauss). Filled with maps, views, and rich descriptions of places throughout Europe and beyond, it was the best general source of geographical information until the advent of Ortelius' Theatrum. It was first issued by Sebastian Munster (1488 - 1552) in its 1544 German edition, and stayed in print long after its author's death in thirty five editions, and in five languages. (Of these, the 1550 and 1552 editions are widely regarded as the most complete and truest to the author's intentions: thereafter, later editors continued to add to the work's text; editions from 1588 onwards employed an entirely different set of maps produced on Ortelius' model.) Munster's goal, initially, was to rally his homeland's humanists and scholars to produce a new map of Germany in order to 'see what kind of a land our ancestors conquered for their home... bring honor to our country and place its beauties in the clear light of day.' Munster's project quickly expanded to cover the known world in its scope to produce a 'sufficiently large volume, in which I touch upon the foundation of all nations and kingdoms, their peculiarities, rivers, mountains, customs of men, royal successions, origins of the more important cities, succinct histories, religions, characteristics and fertility of lands... in Germany, however, I tarry a little longer.'.