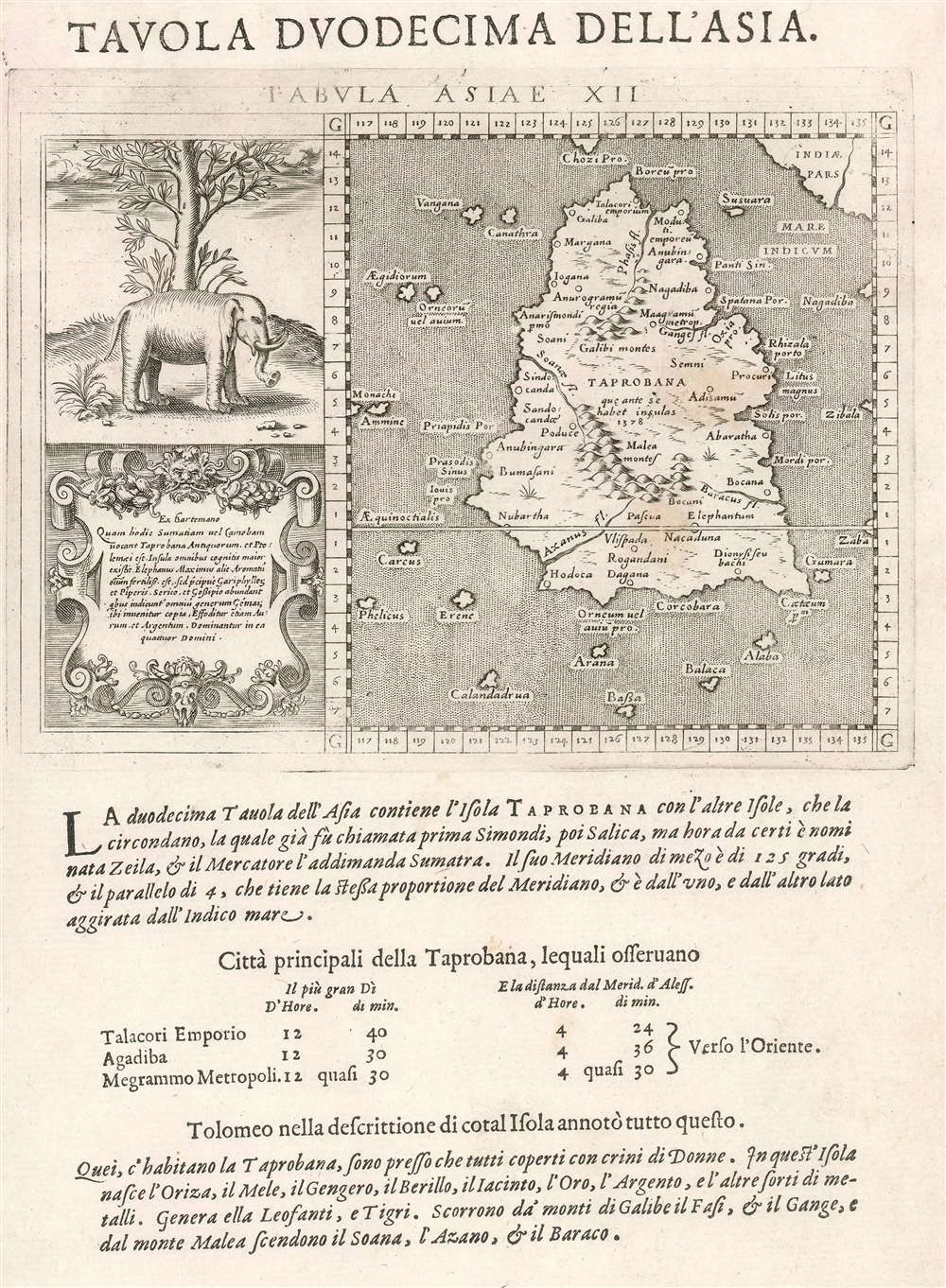 The Most Distant island Mapped in Ptolemy's Era
$400.00

This is Giovanni Antonio Magini's map of Taprobana, appearing in his 1598 Italian edition of Ptolemy's Geographia. This island represented, for Ptolemy, nearly the limit of European geographic knowledge: later geographers typically identified the island as Sri Lanka, though Munster, Mercator and others speculated that the better candidate was Sumatra. The map is oriented to the north and includes not only ‘Taprobana’ but also twenty surrounding islands. The mainland appears above and on the right of the map, which would correspond to the Malay peninsula were the map correctly identified with Sumatra, although the map roughly adheres to Sri Lanka's teardrop shape. To the left of the map is an attractively-engraved illustration of an elephant, and eleven lines of text describing the pepper trade - explicitly identifying the island as Sumatra. Magini joins Gastaldi, and Ruscelli in following the model of Münster, whose version of this map in his own edition of Ptolemy contained these same elements.

Magini's Italian letterpress text below the engraved map describes the island, its people, and its produce.

The first mention of Tapobrana is in the Geographia of Claudius Ptolemy. Today, Ptolemy's Taprobana is considered by some scholars to be entirely mythological and by others to be a wild misinterpretation of either Sumatra or Sri Lanka. Whatever the case may be, the island was mentioned by Marco Polo, who describes is as an enormous landmass:

This led many early cartographers to over-map the island, exaggerating its size and importance. To give this map some scale, the line running horizontally through the center of this map is the Equator (Aequinoctial), meaning that Munster's Taprobana extends from the southern tip of the subcontinent south well beyond the equator - a factor that would make it nearly as large as India

This map first appeared in Magini's 1598 (and only) edition of Ptolemy's Geography. The book is well represented in institutional collections, but the separate map is catalogued only once in OCLC.

Giovanni Antonio Magini (June 13, 1555 - February 11, 1617) was an Italian astronomer, astrologer, cartographer, and mathematician. Born in Padua, he completed his studies in philosophy in Bologna in 1579. In 1588 he was chosen over Galileo Galilei as the chair of mathematics at the University of Bologna after the death of Egnatio Danti. Magini was a prolific writer, putting forth theories of celestial motion (he was a supporter of a geocentric solar system), the use of quadrants in surveying and astronomy, and trigonometry. In 1608, Magini produced the first map of Italy to improve on that of Gastaldi: his meticulously researched and beautifully engraved 8-sheet Italia Nuova was hugely influential: upon its publication, Blaeu promptly copied it to produce his own wall map of Italy; the rest of the mapmaking establishment swiftly followed suit. Consequently, virtually every 17th century map of Italy can be identified as a derivative of Magini's monumental achievement. His atlas, Atlante geografico d’Italia, was published posthumously by his son in 1620. This work was intended to include maps of every Italian region with exact nomenclature and historical notes. He also served as court astrologer for the Duke of Mantua. Learn More...