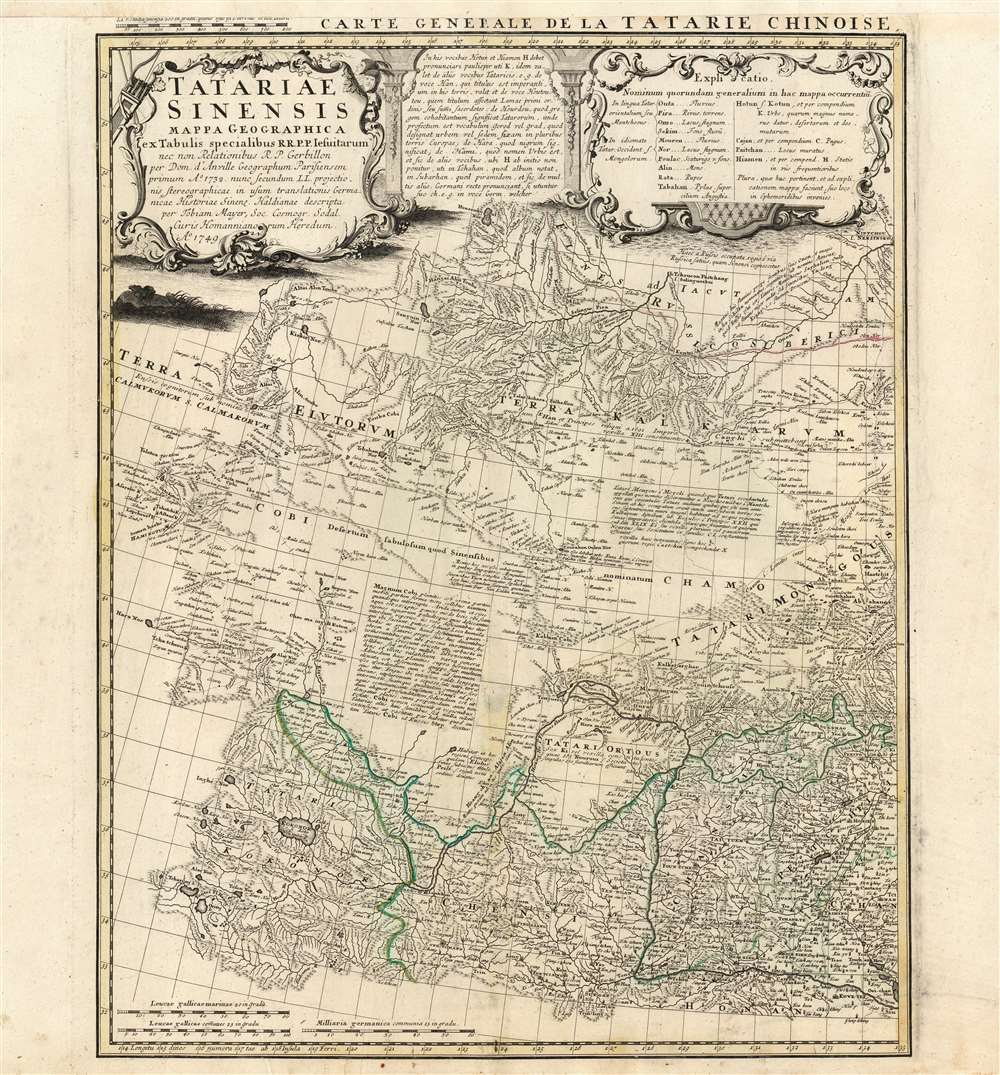 This is a handsome 1749 Homann Heirs map of western China, Mongolia and the extreme southeastern border with Russia. It was produced in order to accompany a German translation of P. Du Halde's 1732 Description de la Chine. As such, it is a faithful copy of J. B. D'Anville's Carte Generale de la Tartarie Chinoise which accompanied Du Halde's original text and the definitive mapping of this little-known and ill-mapped region. D'Anville's map - and Du Halde's data - were derived from Jesuit sources. Jesuits, with the blessing of the Qing Emperor Kangxi, produced at a map of the Chinese Empire's frontiers between 1708 and 1717.

The Scope of The Map

Starting from approximately 33 degrees north, the sheet shows in the south the Chinese regions of Qinghai, Gansu, and Shaanxi. The northern part of the map shows the Russian frontier up to the Onon River. Mongolia and the Gobi Desert lie between. The superbly engraved map includes detailed river networks, pictorially rendered mountains, and numerous caravan routes. There is an extensive descriptive text pertaining to the Gobi Desert, and the speculative location of the ancient capital of the Mongol Empire is noted - 'Terra Kalkarum.' D'Anville's cartography also identifies the ruins of various temples and palaces in Tartary. The map includes Lake Kokonor in the Qinghai Province of China, and embraces part of what is now the Xinjiang Uyghur Autonomous Region. The map is rich in place names and rivers, including several rivers disappearing into the endoheiric basins of the Gobi.

This map was drawn - based on the D'Anville map - for the Homann Heirs firm by Tobias Mayer, and appears to have been a separate issue intended to accompany a German translation of Du Halde's Description de la Chine. It is usually part of a two-sheet map extending to the east and including Korea and Japan. We see nine examples listed in OCLC.


Tobias Mayer (February 17, 1723 - February 20, 1762) was a German astronomer and cartographer famous for his studies of the Moon. He was born in Marbach, Germany and raised in Esslingen in poverty. Between 1744 and 1746, Mayer studied engraving in Augsburg under Andreas Silbereisen (1713 - 1751). Moving to Nuremberg, he began working for the Homann Heirs company in 1746. There, he showed outstanding prowess and introduced many improvements to cartography. For example, Mayer composed Mappa Critica, which illustrated the accuracy, or rather lack thereof, of the latitudes and longitudes of locations in Germany. The map showed three Germanies according to three different cartographers, de l'Isle, Homann, and himself. 'The latitudes of the cities was mostly consistent, whereas the longitudes of some places (such as Dresden or Prague) differed by as much as a degree, thus showing to what extent longitude was problematic even on land' (Wepster, Steven, Between Theory and Observations: Tobias Mayer's Explorations of Lunar Motion, 1751-1755, Berlin, 2009). Mayer went on to create some of the first charts of the Moon and his chart of the full moon was unsurpassed for half a century. His fame comes from his lunar tables, and thanks to his scientific reputation he was elected as the chair of economy and mathematics at the University of Göttingen in 1751. He became superintendent of the observatory in 1754, where he worked until his death in 1762. Mayer is occasionally erroneously referred to as 'the Elder' or 'Johann Tobias the Elder.' Learn More...