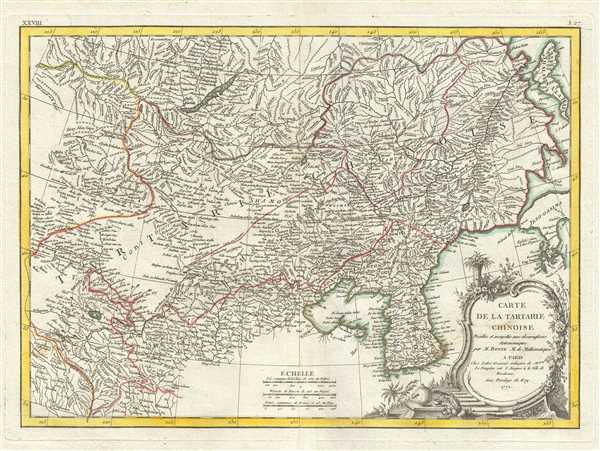 A beautiful example of Rigobert Bonne's 1771 decorative map of Chinese Tartary. Covers from the Lop Nor region eastward to Korea, Manchuria, Sakalin and Jeso-Gasima (Hokkaido). Includes both Inner Mongolia and Outer Mongolia. Extends north to include Lake Baikal. Names numerous towns, cities and river systems. Shows the Great Wall of China. At the far eastern extreme of this map Jeso-Gasimia, or Hokkaido, is mapped speculatively along its northern shore. The island of Sahalien (or Sakhalin) also appears with erroneous shores. A decorative title cartouche appears in the lower right corner. This is an uncommon and rarely seen map. Drawn by R. Bonne in 1771 for issue as plate no. A 27 in Jean Lattre's Atlas Moderne.