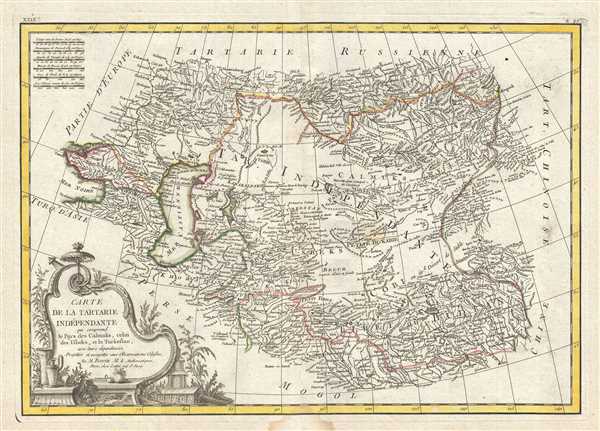 A beautiful example of Rigobert Bonne's c.1778 decorative map of Central Asia. Covers from the Black Sea south to China, north to Russia, and south to Persia and India. Includes the modern day nations of Kazakhstan, Uzbekistan, Turkmenistan, Georgia, Armenia, and Azerbaijan, with parts of adjacent Turkey, Saudi Arabia, and Pakistan. Names numerous tribal areas, villages, cities, deserts, Silk Route way stations, and river systems. This area was originally inhabited by Turkic and Mongol peoples of the Mongol Empire who were generically referred to as Tartars.

A large decorative title cartouche in the lower left quadrant features articles supposedly common to the region. Drawn by R. Bonne for issue as plate no. B 27 in Jean Lattre's Atlas Moderne.