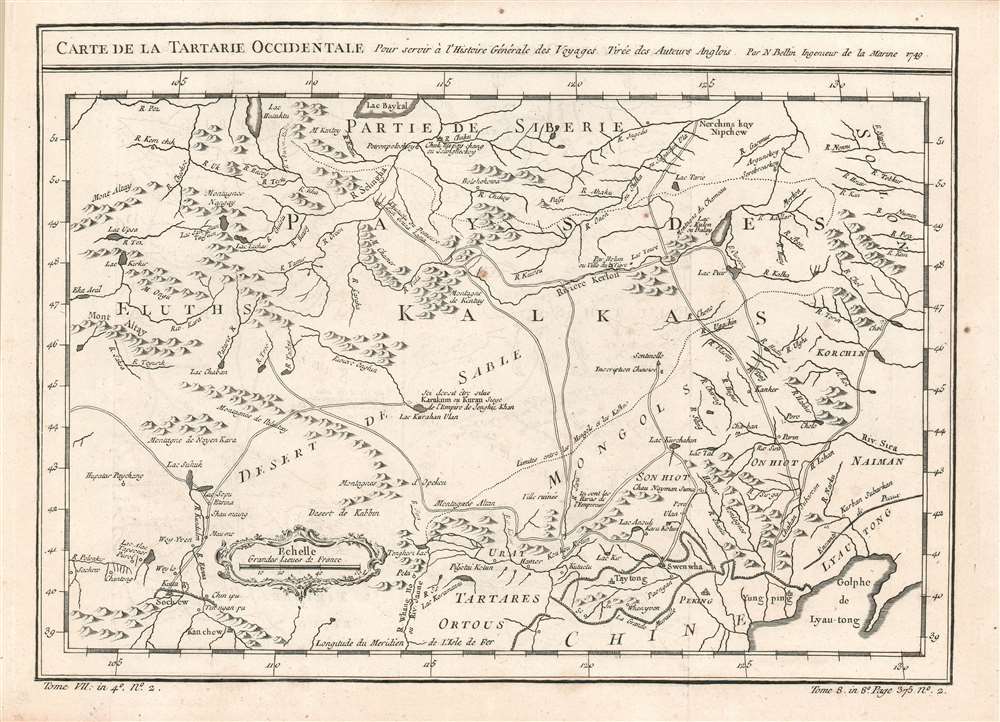 Revealing the newly-mapped Silk Road regions of the Gobi Desert.
$250.00

This is a 1749 Bellin map of the Gobi Desert and the eastern portion of the Silk Route region 'Tirée des Auteurs Anglois.' For 'Auteurs Anglois' read 'Thomas Kitchin', who produced the 1747 A Map of Western Tartary which the present map copies faithfully, and translates. Kitchin's map, itself, was drawn from Jesuit Missionary reports and the monumental 1734 Kirilov map of the Russian Empire.

The map extends from Lake Baikal in the north as far south as Beijing, east to the Gulf of Lyau-tong (Yellow Sea), and west as far as Chan-tong. The centrally-located Desert de Sable is the Gobi Desert. At its center is the supposed site of Karakorum, the semi-legendary ancient capital of the Mongol Empire. To the south beyond the desert are shown the Mongol territories north of the Great Wall of China (beyond which Peking can be found.) The map shows caravan routes, rivers (known and imagined) and settlements. Ruined cities are noted as is a remarkable sentinel post, far to the north of the wall, said to be marked with Chinese inscriptions. European cartographers had been in nearly complete ignorance of this region's true geography, and the speed (and thoroughness) with which this map was copied and propagated is a testament to European hunger for knowledge of this part of the world.

This map appears on the market from time to time; Separate copies of the map and full copies of Prévost's Histoire and the Harpe editions of it are well represented in OCLC.


Ivan Kirillovich Kirilov (Иван Курилов, 1689 - April 14, 1737) was a Russian cartographer and surveyor active in Moscow in the late 17th and early 18th centuries. He is considered to be the Father of Russian Cartography. He was born to a mid-level government official serving under Peter the Great. When Peter founded the Russian Naval Academy in 1701 many educated families encouraged their male children to enroll. Kirilov was enrolled one year later in 1702, when he was just 13. There he studied navigation under the polymath Leontij Magnitzki, and his assistants. He graduated from the academy in 1707, taking up a position in the Navy Department, which allowed him to travel and study in other parts of Europe. He later transferred to the Civil Service Land Survey Department, where he became a clerk and surveyor. There he impressed his superiors and was recalled to Moscow in 1712, to work in the head office of the Estates Department (Pomyestni Prikaz). He was subsequently transferred to the Senate Chancellery where he rose through the ranks and his reputation as a master mapmaker grew. When Peter the Great instituted a empire-wide survey, Kirilov was put at his head. Kirilov compiled new and existing survey work into a series of map between 1726 and 1834, which eventually were published as the Russia's first scientific atlas, the Atlas Imperii Russici. After the initial publication of his atlas, Kirilov continued to compile additional maps of Russia into an even greater survey. Unfortunately, defeated by his excoriating work ethic, the dedicated cartographer contracted consumption and died four years later, in 1737. After his death, all of Kirilov's work was acquired by the St. Petersburg Academy and suppressed, so surviving examples are exceedingly rare. Learn More...