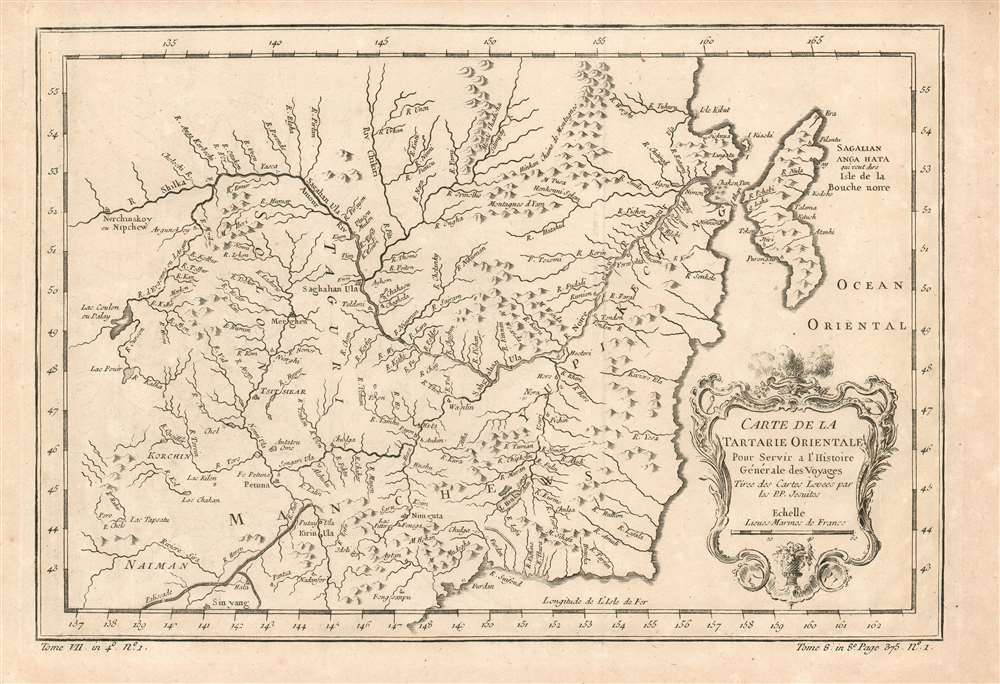 A time of increasing tensions between expansionist Russia and Qing China.
$225.00

This is a 1749 Bellin map of the frontier between Russia and China, during a period of increasing pressure between the expanding Russian Empire and the Qing dynasty. The map covers the Chinese provinces of Jilin and Heilongjiang, and the Russian Amur Oblast, Khabarovsk Krai, Primorsky Krai and Sakhalin Island.

The region labeled 'Manchews' is among the earliest precursors of 'Manchuria' as a place name, as opposed to the term of 'Tartary.' The Chinese Qing dynasty identified culturally as 'Manchu,' and they lionized their place of origin in order to both differentiate themselves and to emphasize their superiority over the Han Chinese. The name now is associated strongly with the Japanese colonial puppet state of 1932, as well as Russian efforts to dominate the region.

The Treaty of Nerchinsk

The first half of the seventeenth century saw increasing attempts by Russia to absorb the region on the banks of the Amur River, both militarily and via an influx of settlers. Russia had already acquired Siberia, and this expansion eastward brought the Tsardom into conflict with China. The 1649-50 Russian occupation of the Amur was met with successful resistance by Chinese forces Diplomacy resulted in the 1689 Treaty of Nerchinsk, which halted the Russian advance into the Amur basin, and prohibited Russia from navigating the River.

Not addressed by the Treaty was the territoriality of the large, ill-defined island at the mouth of the Amur. The Qing dynasty considered the island to be part of its territory, and its people paid the Qing tribute. However, the Chinese government did not maintain a military force there, and thus the island was subject to Japanese attempts at colonization. Sakhalin begins appearing on maps in the 18th century. Both this map and the Kitchin upon which it is based claim this map to be derived from Jesuit sources. However, this boomerang-shaped iteration of the island appears to be derived 1724 manuscript by Kirilov, which was based on manuscript Chinese maps (which are believed to have been executed on behalf of The Kangxi Emperor - by Jesuits.) No more accurate representation of the island would become available until its charting in 1787 by La Perouse.

This map appears on the market from time to time, but appears to be scarce; Only seven separate copies of the map (in various editions) are catalogued in OCLC. Full copies of Prévost's Histoire and the Harpe editions of it are well represented in OCLC.


Ivan Kirillovich Kirilov (Иван Курилов, 1689 - April 14, 1737) was a Russian cartographer and surveyor active in Moscow in the late 17th and early 18th centuries. He is considered to be the Father of Russian Cartography. He was born to a mid-level government official serving under Peter the Great. When Peter founded the Russian Naval Academy in 1701 many educated families encouraged their male children to enroll. Kirilov was enrolled one year later in 1702, when he was just 13. There he studied navigation under the polymath Leontij Magnitzki, and his assistants. He graduated from the academy in 1707, taking up a position in the Navy Department, which allowed him to travel and study in other parts of Europe. He later transferred to the Civil Service Land Survey Department, where he became a clerk and surveyor. There he impressed his superiors and was recalled to Moscow in 1712, to work in the head office of the Estates Department (Pomyestni Prikaz). He was subsequently transferred to the Senate Chancellery where he rose through the ranks and his reputation as a master mapmaker grew. When Peter the Great instituted a empire-wide survey, Kirilov was put at his head. Kirilov compiled new and existing survey work into a series of map between 1726 and 1834, which eventually were published as the Russia's first scientific atlas, the Atlas Imperii Russici. After the initial publication of his atlas, Kirilov continued to compile additional maps of Russia into an even greater survey. Unfortunately, defeated by his excoriating work ethic, the dedicated cartographer contracted consumption and died four years later, in 1737. After his death, all of Kirilov's work was acquired by the St. Petersburg Academy and suppressed, so surviving examples are exceedingly rare. Learn More...