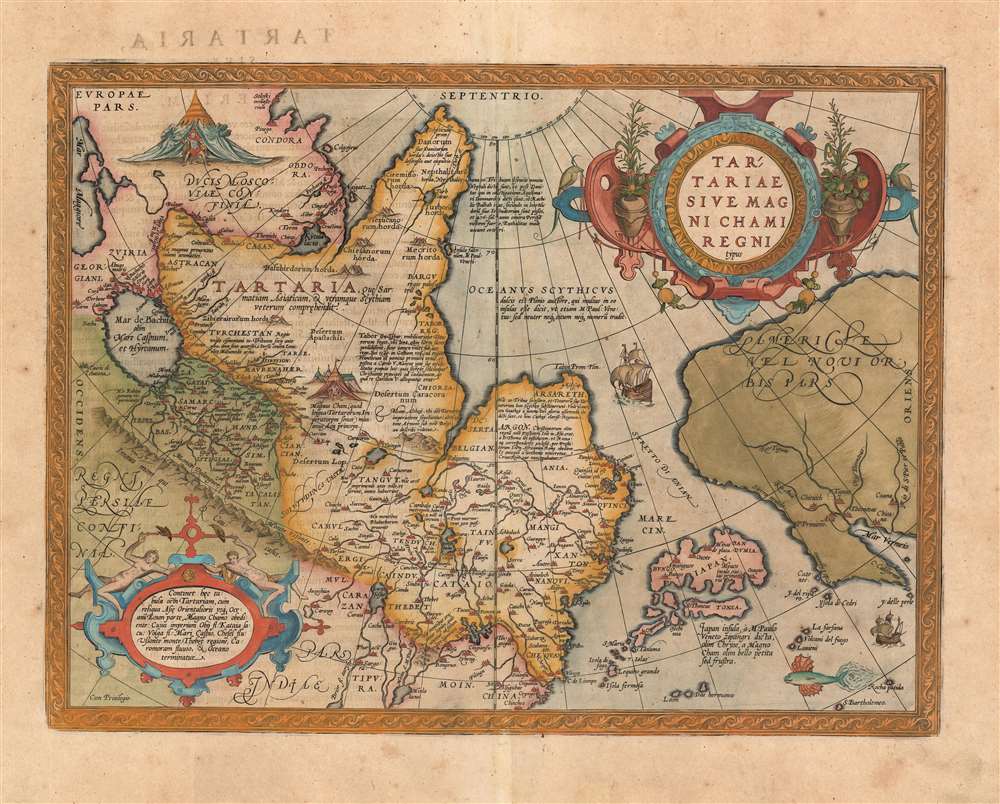 One of the first maps to show the Pacific Northwest.

A richly-colored example of Ortelius' seminal map of Tartary, this is one of the first maps to focus on the North Pacific. While the map is primarily intended to detail Asia as dominated by the Great Khan, it is also notable for what it shows of America. The map includes what is now the west coast of the United States, northwestern Canada and Alaska, bit was then almost entirely unknown lands. It is the earliest obtainable map to name California. It also displays a strait separating Asia and America - the Strait of Asian - appearing long before the existence of such a strait was proved by discovery. The map is based on a partial conic projection, and depicts from the Black Sea to the Gulf of California, and from the Arctic to southern China, what Europeans then considered the extent of the Tartar Kingdom. In fact, much of the content north of China is mythical or loosely derived from the journals of Marco Polo, the legends of Prester John, and Biblical sources.

This is one of the earliest maps to attempt the mapping of northeast Asia: prior maps relied entirely on the information of ancient geographers, whose concrete data seldom reached beyond what is now considered Eastern Europe. Ortelius' map is infused with considerable data from Marco Polo's 13th century voyages, but Ortelius also does much to reconcile the medieval knowledge of Asia with the 16th century revelations of the Western Hemisphere. The Pacific Ocean is optimistically narrow, particularly at the Strait of Asian separating the continents, encouraging the notion of a close connection between the Americas and the treasures of the orient.

Treasure Cities in the Americas

Near America's peninsular California, six of the legendary Seven Cities of Gold are noted: Chicuich, Axa, Tiguas, Totonteas, Chicana, and Coana. The legend of the Seven Cities emerged in Europe long before Columbus, during the Moorish invasion of Spain. It was said that when the Moors invaded Porto in the early 8th century, the city’s seven bishops took all of their wealth and fled to sea. They landed on an island in the Atlantic called 'Antilla.' There, each of the seven bishops established a city. The island of Antilla actually appears on many early portolan charts of the Atlantic, but as navigators explored more and more of that ocean and failed to discover the Antilla, the Seven Cities were relocated to the unexplored American southwest.

The map is superbly engraved, with an elaborate strapwork-and-floral cartouche. The Pacific Ocean features a flying fish and a sailing ship plying the Strait separating Asia and America (something no European would do for centuries). In the upper right, the Grand Duke of Muscovy sits in a splendid tent; in Central Asia, another tent houses the Great Khan.

The Asian portion of the map is heavily annotated, revealing much of Ortelius' sources:

In Arctic Russia, beyond 70 degrees north:

In the ocean corresponding to the East Siberian Sea:

The Scythian ocean, according to Pliny, has sweet water, and he also says it contains many islands, as M. Paulus [Marco Polo] also says, but neither of the two tells about their number or location.

Tabor or Tybur, center of the area of the Tartars, where once the Holy Books got lost, yet they are united under one king, who in 1540 first reached France and king Franciscus, and later, at the initiative of Charles the Fifth was burnt at the stake for his heresy, because he had secretly endeavoured to convert Christian kings to the Jewish religion, about which he had spoken with Charles the Fifth.

At the furthest extreme of northeastern Asia:

ARSARETH: Here the ten tribes retreated, and changed from the Tatar or Tartar area to Scythia. Since then they are called Gauths or Gauthens, confirming Gods highest glory, and here lies the splendid kingdom of Cathai.

In the vicinity of Mongolia or Northern China:

In the Lower-Left Cartouche:

This map was first issued in 1570 to accompany Ortelius' great Atlas, Theatrum Orbis Terrarum, and was one of the first fifty-three maps included in the work. This map appears in four states, of which this is the third. (Over the course of the map's printing history, the hachuring on the coastlines was reworked several times: the long 7-9 mm hachure here correspond with van den Broecke's third state.) The typography of the Latin text on the verso identifies this specific example as belonging to a 1601 edition of the Atlas. Ortelius' masterpiece was successful, and is well represented in institutional collections.

Ortelius, A., Theatrum Orbis Terrarum, (Amsterdam) 1601.     Abraham Ortelius' magnum opus, Theatrum Orbis Terrarum, was the world's first regularly produced atlas, which 'set the standards for later atlases . . . It was the first undertaking of its kind to reduce the best available maps to an uniform format.' (Koeman) A modestly-sized work of fifty-three maps in its first edition of May 1570, it was an immediate success: there were three further editions that year, and the work remained in print for a total of 32 editions, the last of which was 1641, well after its author's 1598 death. Ortelius added to his atlas constantly, and by 1595 the Theatrum contained 147 maps. Ortelius is renowned generally as an editor, and indeed much of the Theatrum is compiled from a variety of sources: in such cases, Ortelius was scrupulous in naming his sources. But Ortelius was also a mapmaker in his own right: many of his maps are a distillation of various sources into his own work, and there were many maps - particularly in his atlas of Biblical and ancient history Parergon - which were entirely Ortelius' work. In his role as an editor, Ortelius followed in the footsteps of Munster, whose Cosmographia was, until Ortelius, the best window on the world for the curious European reader. In terms of the artistry of his maps, Ortelius oversaw the first great flourishing of copperplate engraving in the service of cartography to occur in Northern Europe. Ortelius' work provided the model for the atlases of Mercator, Hondius, Blaeu and all their progeny in the 17th century - many of whom were to produce faithful editions of Ortelius' maps in their own productions.