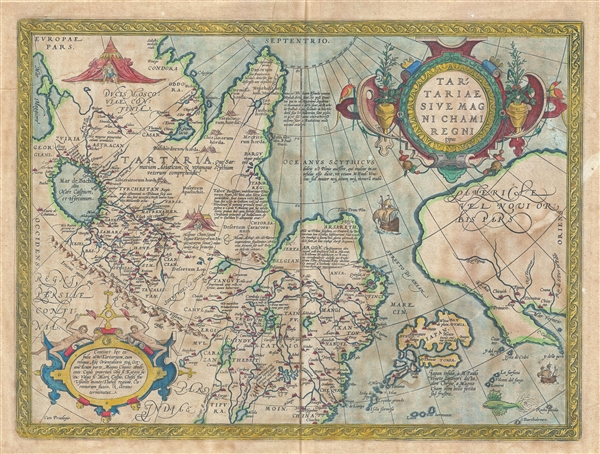 The first state of Ortelius' important 1570 map of Tartary. Among other things, this map is notable as the earliest obtainable map to name California. The map covers from the Black Sea to the Gulf of California and from the arctic to southern China. The map covers what was then considered by Europeans to be the extent of the Tarter Kingdom. In fact, much of the content north of China is mythical or loosely derived from the journals of Marco Polo, the legends of Prester John, and Biblical sources. There are copious annotations and, as we translate them below, much of this will become apparent to the reader.

This map is important. It is one of the earliest European mappings of northeast And, although fraught with speculation, reveals much. North American and Asia, are for example, quite close, separated only by the Narrow Strait of Anian. Although Alaska and the Bering Strait are at this time most assuredly unknown to Europeans, the speculation of a close connection between Europe and the western parts of America were common. Note how close Japan is to California – a clear layover of Columbian hopes that the New World may indeed lie close to the rich markets of Asia.

Also in America, six of the supposed Seven Cities of Gold are noted: Chicuich, Axa, Tiguas, Totonteas, Chicana, and Coana. The legend of the Seven Cities emerged in Europe long before Columbus, during the Moorish invasion of Spain. It was said that when the Moors invaded Porto in the early 8th century, the city’s seven bishops took all of their wealth and fled to sea. They landed on an island in the Atlantic called 'Antilla.' There, each of the seven bishops established a city. The island of Antilla actually appears on many early portolan charts of the Atlantic, but as navigators explored more and more of that ocean and failed to discover the Antilla, the Seven Cities were relocated to the unexplored American southwest.

The following translations from the Latin annotations will shed much light on the composition of this map:

The Scythian ocean, according to Plinius, has sweet water, and he also says it contains many islands, as M. Paulus [Marco Polo] also says, but neither of the two tells about their number or location.

Tabor or Tybur, center of the area of the Tartars, where once the Holy Books got lost, yet they are united under one king, who in 1540 first reached France and king Franciscus, and later, at the initiative of Charles the Fifth was burnt at the stake for his heresy, because he had secretly endeavoured to convert Christian kings to the Jewish religion, about which he had spoken with Charles the Fifth.

Here the ten tribes retreated, and changed from the Tatar or Tartar area to Scythia. Since then they are called Gauths or Gauthens, confirming Gods highest glory, and here lies the splendid kingdom of Cathai.

The great Khan (which in the language of the Tatars means emperor), the highest ruler of Asia.

This map was first issued in 1570 to accompany Ortelius' great Atlas, the Theatrum Orbis Terrarum. The atlas was issued in numerous editions well into the mid-1600s. This map appears in four states, of which this is the first. The variosu states can be most easily identified by the length of the hachuring. The earlies states had hachuring 2-3mm long, while some of the later states feature hachuring up to 9mm in length. In addition, portholes were added and removed from the ship throughout the states. Spanish text on verso.