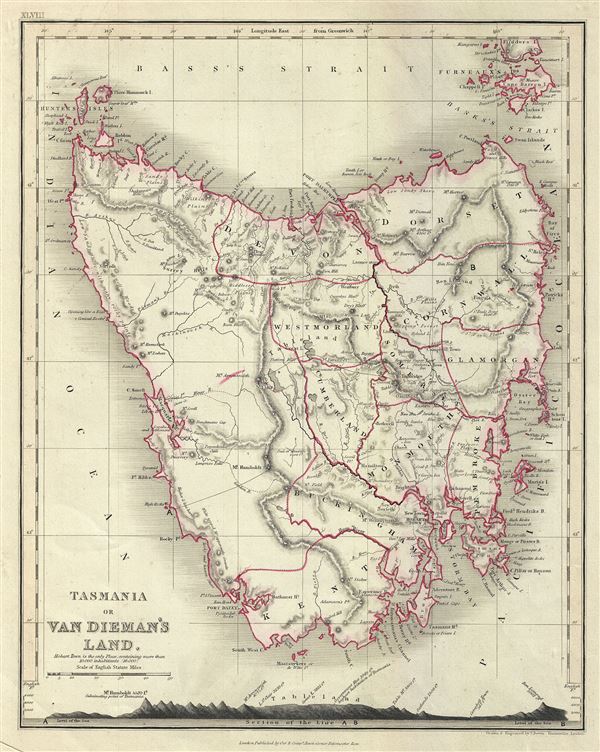 A fine 1860 map of Tasmania or Van Diemen's Land by John Dower. The map covers the entire island of Tasmania in considerable detail noting towns, lakes, mountain ranges and other topographical features. The bottom of the map contains an elevation profile. Van Diemen's Land, was colonized by the British as a Penal Colony under the name 'Van Diemen's Land,' referring to the Dutch East India Company governor who sponsored Tasman's historic 1642 discovery of the island. In 1856, a few year before this map was issued, Van Diemen's Land was granted responsible self-government and renamed 'Tasmania.' This map was engraved by J. Dower and issued in 1860 by Orr and Company.

John James Dower (June 1, 1825 - 1901) was a well-respected mapmaker, print seller, and publisher based in London, England. Dower is the heir to the more prominent London engraver and mapmaker John Crane Dower (1791 - 1847). Dower worked with many prominent middle to late 19th century London map publishers including Weller, Cassell, Bacon, Petermann, and others. He was elected to the Royal Geographical Society in 1854. Dower also published on maps his own account including one atlas and various school geographies. In addition to his cartographic work, Dower is well known as an engraver of military scenes.

National Library of Australia, Map Room, MAP RM 2042.
Looking for a high-resolution scan of this?