1800 Flinders and Arrowsmith Map of Tasmania 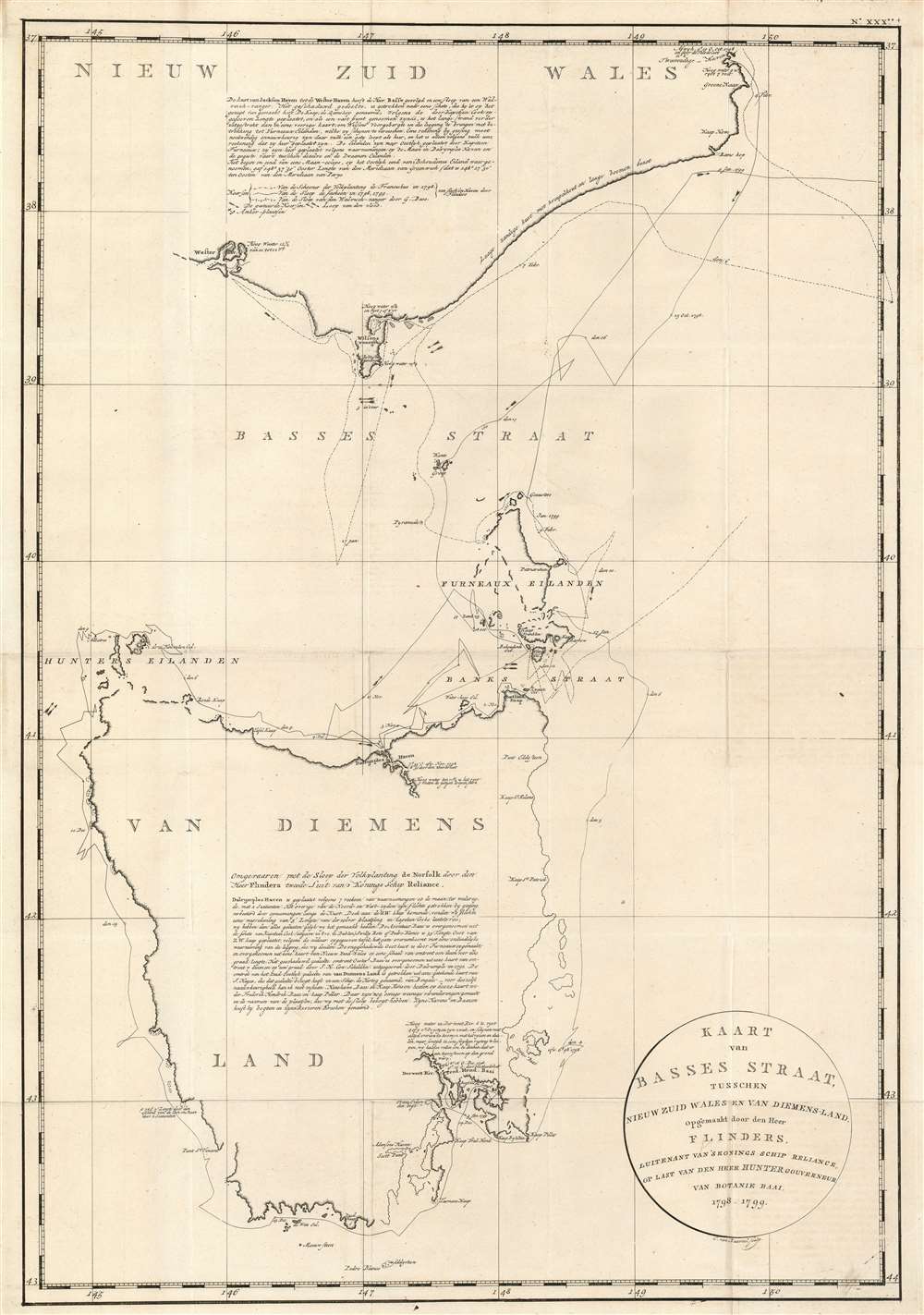 1800 Flinders and Arrowsmith Map of Tasmania

One of the first maps to depict Tasmania as an island following the circumnavigation of Tasmania by this map's creator.

Created by Captain Matthew Flinders during his circumnavigation of Tasmania or Van Diemens Land, this c. 1800 map is one of the first to depict Tasmania as a separate island. Resulting from the first circumnavigation of the island, Tasmania is illustrated in some detail, but it is also evident that Flinders was not exceptionally confident about his reconnaissance of the entire coastline. He uses gaps and ghosting to mark uncertainties, particularly along the northwest coast. The eastern coast is much more tenuously sketched, probably due to the distance from shore Flinders maintained. Two large block texts, one situated in New South Wales and the other in the interior of Tasmania, furnish more information, with all text in Dutch.

In February 1798, Matthew Flinders set out on an expedition to the Furneaux Islands, situated south of mainland Australia, to recover goods from a shipwrecked cargo vessel. During this voyage, Flinders became convinced that a strait existed between Australia and points south. Two months earlier, in December 1897, George Bass arrived at the same conclusion while on an expedition along the southern Australian coast, making it as far as modern-day Westernport, Victoria. Both men, hoping to confirm their theory, set sail on the Norfolk on October 7, 1798. Flinders and Bass first sailed south to the Furneaux Islands, where Flinders revised the charts from his first voyage. After twelve days, they sailed west, and on November 3 arrived near modern day Port Dalrymple, at an estuary of the Tamar River. A fine harbor with fresh water, good soil, and plentiful food, this was a major discovery where the expedition spent seventeen days. Flinders surveyed the harbor while Bass led expeditions inland. From there they continued west, and by December 9th had reached the westernmost point of Tasmania. They then navigated south, putting in at Frederick Henry Bay and the Derwent Estuary. On January 3, 1799, the duo turned north towards Port Jackson, successfully confirming the insular nature of Tasmania. Having accomplished their goal, the duo bypassed a significant portion of the eastern coast of Tasmania on the return voyage.

Created by Matthew Flinders, the first edition of this chart was published by Aaron Arrowsmith on June 16, 1800. The current example come from a fourteen volume Dutch work on Cook's voyages published by Jan David Pasteur entitled Reizen Rondom de Waereld door James Cook. We are aware of three examples in institutional collections, all of which are in Australia. These examples are part of the collections of the National Library of Australia, the State Library of Tasmania, and the Flinders University Library.