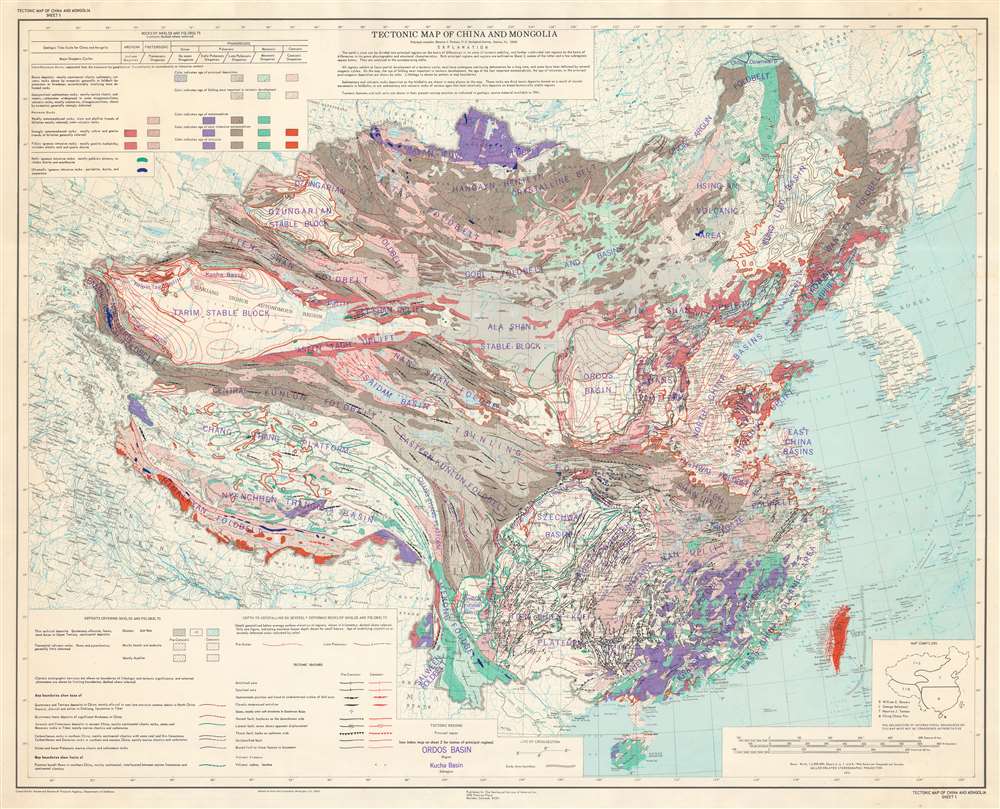 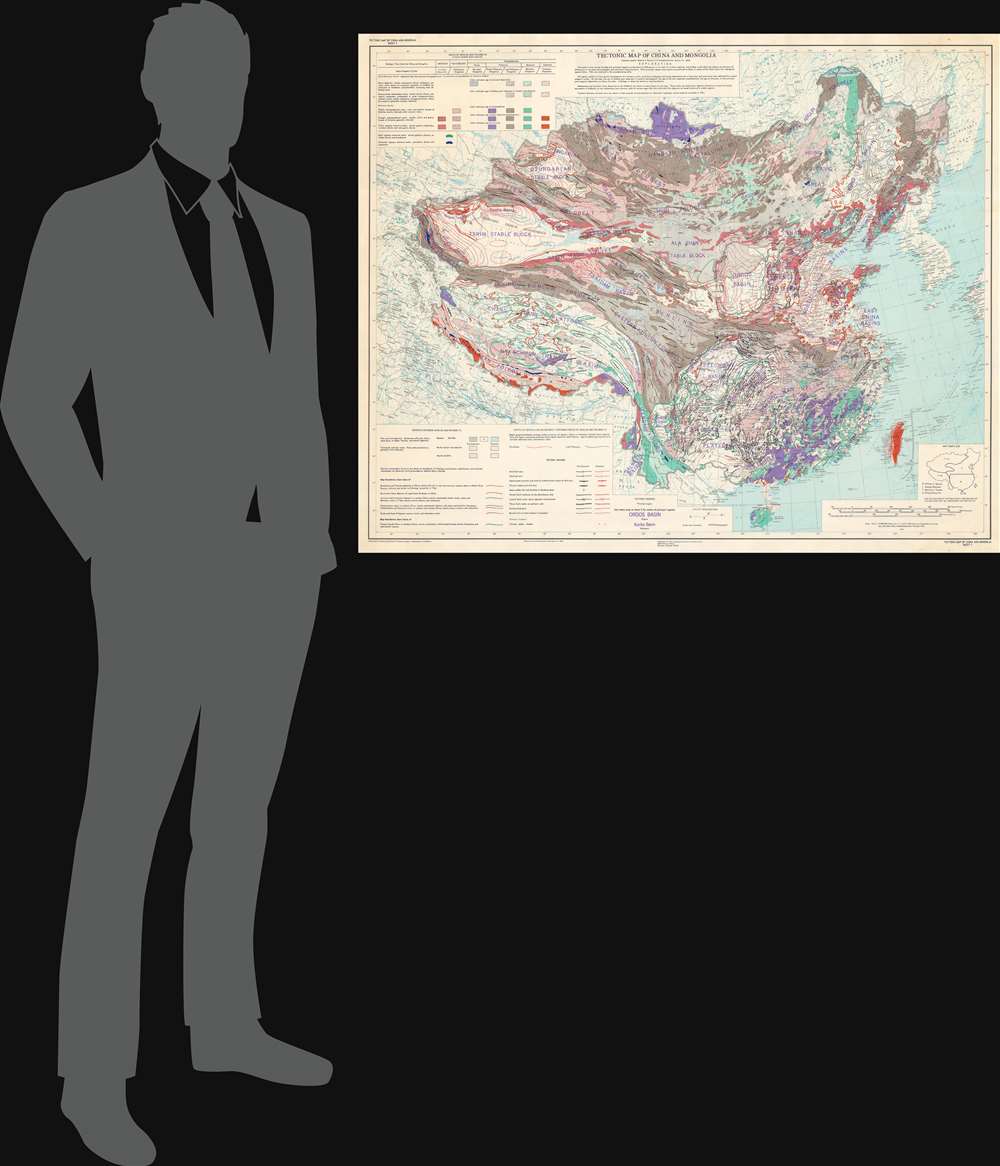 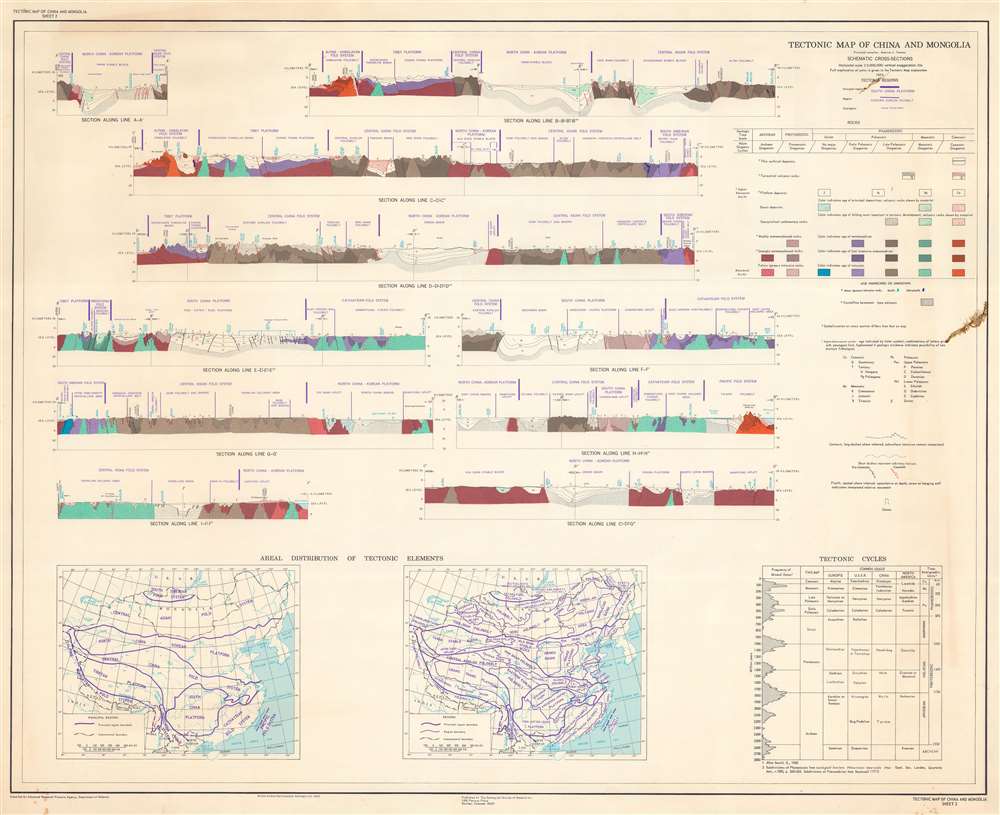 One of the most tectonically important and complicated terranes in the world.
$600.00

This is a 1973 tectonic map of China and Mongolia - one of the most tectonically important and complicated terrains in the world. The map was published in the wake of the 1973 Luhuo Earthquake by the Geological Society of America and was compiled in the mid-1960s by Maurice J. Terman with help from William E. Bowers, George Soleimani, and Ching Chang Woo. Variations in color and shading patterns illustrate differences in the age and composition of geologic formations. Thick red and black lines indicate tectonic features, including faults. Other notations detail deposits covering shields and foldbelts, such as glaciers and salt flats.

China is one of the world's most tectonically complex regions. The two most important Mesozoic-Cenozoic tectonic zones, the Circum-Pacific zone and the Tethys-Himalaya zone interact with each other, as well as with microplates within China and Mongolia. The result is an immensely varied and highly geo-active space, rich with geological anomalies, such as rare blueschists, faults, and subduction zones.

That this map was cited in at least a dozen articles and books underscores its historical importance. Per Terman and other sources, the map was compiled in the mid-1960s from available source materials.

Ten profile cross sections of areas within China and Mongolia occupy most of Sheet 2. Here, colors indicate the age of the rock in question, while patterns mark metamorphic and igneous formations. A table detailing tectonic cycles occupies the lower right and maps presenting an overview of tectonic regions in China and Mongolia are situated to the left of the table.

A 7.6 magnitude earthquake struck the Tibetan Autonomous Prefecture on February 6, 1973. It had a maximum intensity of X (Extreme) on the Mercalli intensity scale and resulted in 2,199 deaths and 2,743 injuries in Sichuan. Perhaps the devastation caused by this earthquake, paired with President Nixon's 1972 trip to China, led the Geological Society of America to publish this map.

This map was compiled by Maurice J. Terman, William E. Bowers, George Soleimani, and Ching Chang Woo and published by the Geological Society of America in 1973. This map is well represented in institutional collections but is rare on the private market. We are unaware of any market history for this piece.

Maurice J. 'Ric' Terman (January 25, 1924 - March 22, 2018) was an American cartographer and geologist. Born outside Beijing, China, to educational missionaries, Terman returned to the United States as a teenager. He attended high schools in Ohio, Pennsylvania, and New York before graduating from Bronxville New York High School. Terman entered Columbia University in 1940 and studied geography. World War II interrupted his time at Columbia, and he spent three years as a photo interpreter for the U.S. Army Air Corps in the Pacific Theater. Terman saw action in New Guinea, the Philippines, Okinawa, and Korea and was awarded a Bronze Star for his actions on the beach at Wake Island in June 1944. After the war, Terman returned to Columbia and earned a bachelor's degree in Geology in 1946, Masters in 1948, and a PhD in 1949. After finishing his doctorate, Terman began teaching in the Geology Department at the University of Kentucky and worked for the Kentucky Geological Survey. He joined the U.S. Geological Survey (U.S.G.S.) as a geologist in 1951 and worked there for forty years. During his tenure with the U.S.G.S., Terman worked in the area of military geology in Europe before moving into the geology and tectonics of eastern Asia and the Pacific Rim. He was the principal compiler of the 1973 Tectonic Map of China and Mongolia. He served as Chief, Asia and Pacific Geology in the Office of International Geology during his last twelve years with the U.S.G.S. During these twelve years he helped geological programs in Pacific Rim nations. Terman retired in 1991 and became a Scientist Emeritus at the U.S.G.S., a position he held for another twenty years. He married Gertrude Cook in 1947, with whom he had two children. Gertrude died in 2002, and Terman married Sigrid Reddy Watson in 2003. Learn More...