1870 Johnson Map of the World showing Temperature and Ocean Currents 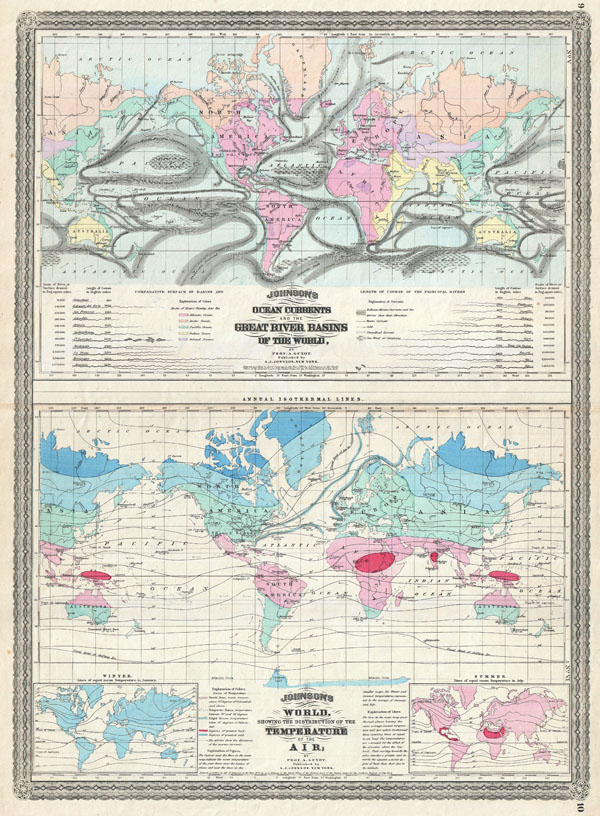 1870 Johnson Map of the World showing Temperature and Ocean Currents

This is A. J. Johnson 1870 thematic map of the world illustrating Currents, River Basins, and Air Temperature. Combines two maps, both based upon the work of Geologist A. Guyot, on a single folio sheet. The upper map depicts the world's ocean currents and illustrates the Great River Basins of the world. Under the map a comparative chart indicates the lengths of the world's great rivers. The lower map depicts the average air temperatures for different parts of the world. Two smaller maps at the bottom of the main map show variances for winter and summer. Features the spirograph style border common to Johnson's atlas work in 1870. Steel plate engraving prepared by A. J. Johnson for publication as page nos. 9 - 10 in the rare 1870 edition of his New Illustrated Atlas… Dated and copyrighted, 'Entered according to Act of Congress in the Year of 1870, by A. J. Johnson in the Clerks Office of the District Court of the United States for the Southern District of New York.'