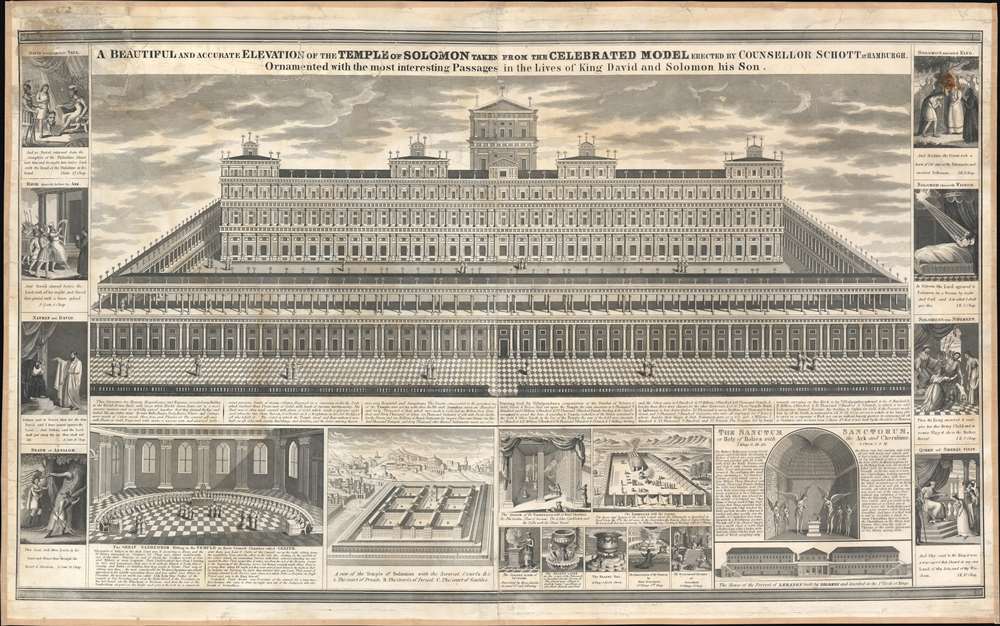 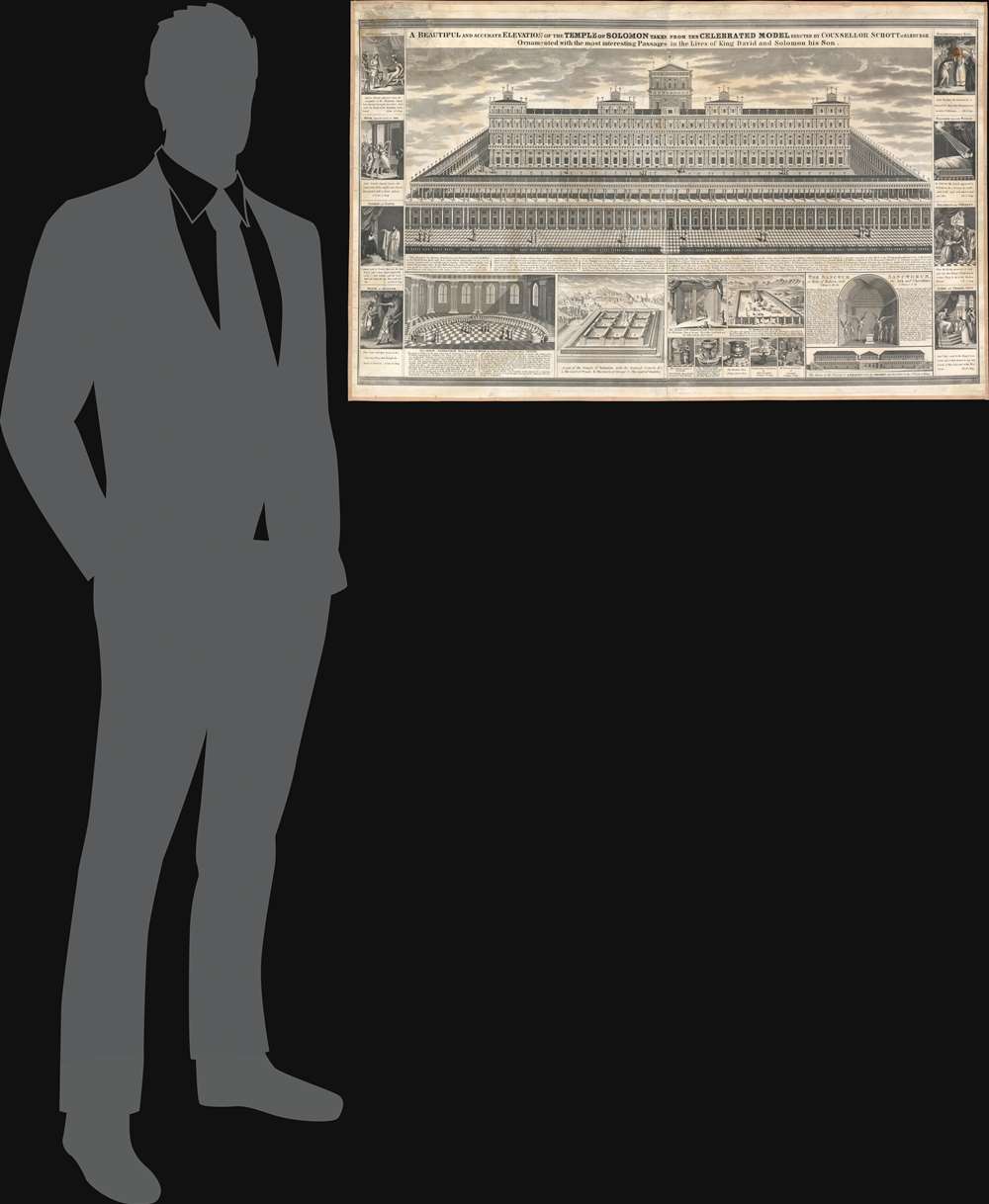 This is a c. 1868 John Sherer masonic instructional broadside wall map incorporating an impressive view of the model of the Temple of Solomon as commissioned in 1863 by Hamberger chancellor Gerhard Schott.

The View and the Temple of Solomon

Said to be the most beautiful building in the world at the time, Solomon's Temple was built out of marble and covered in gold, silver, and other jewels. Its lavish construction is immediately evident in this view, and the accompanying description of the wealth contained within is astonishing. Views of chambers within the Temple, including the Great Sanheidrim and the Sanctum Santorum (which housed the Ark of the Covenant), appear in the lower left and right corners. Bird's-eye views of the Temple complex and the Tabernacle are situated at the bottom center. Eight vignettes of Bible stories surrounding the lives of Kings David and Solomon create the left and right borders. David is shown holding Goliath's head before King Saul, dancing before the Ark of the Covenant, being absolved from sin by Nathan, and in the last of the four vignettes, David's son Absalom is killed by Joab. The scenes associated with Solomon include him being anointed as king, receiving Wisdom from God, the famous scene of Solomon decided who was the rightful mother of a child, and Solomon greeting the alluring Queen of Sheba.

Schott's Model of the Temple

Gerhard Schott (April 15, 1641 - October 25, 1702) was a senator from Hamburg and the founder and director of the Hamburg Opera. Schott commissioned the model, which covered 130 square feet, to accompany the opera 'The Destruction of Jerusalem' first performed in 1692. The opera, which consisted of two parts, included scenes both in and in front of the burning temple. Unfortunately, the historical record is unclear about how long it took to build this massive model, stating anywhere between six and fifteen years. Reasonable estimations put its construction between 1693 and 1698, but no one is certain. The mismatch between these construction dates and the first performance of the opera presents several questions. Schott's heirs sold the model to a Londoner in 1717, after Schott's death. The model stayed in London until 1730 and was put on public display at the London Royal Exchange from 1729 - 1730. In 1732, the model traveled to Dresden, where it was part of a Jewish ceremonial art exhibition. The history of the model then disappears for over a century, until its acquisition by the Hamburgmuseum in 1910.

Sherer's view is indelibly connected to Freemasonry. Sherer was a Freemason who published several editions of a book entitled The Masonic Ladder: or the Nine Steps to Ancient Freemasonry. He is also remembered for creating at least one monumental broadside known as the 'Master's Carpet.' An example of the c. 1729 edition of this view is part of the collection at the Henry Wilson Coil Library and Museum of Freemasonry.

This view was published c. 1868 by John Sherer. In an advertisement published in Sherer's The Masonic Ladder, Sherer states, 'This work was engraved at Boston, Mass., upon two steel plates, form the celebrated design of Chancellor Schott, of Hamburg, at a cost exceeding two thousand dollars.' Another 19th-century edition of this view was published in Toronto around 1870 by J.T. Rolph. That edition bears Rolph's Toronto imprint along the bottom border. We have been unable to locate any other surviving examples of the present edition. Both 19th-century editions were based upon an earlier 18th-century edition likely published as a souvenir for when Schott's model was displayed in London.

John Sherer (fl. c. 1850 - 1875) was a publisher and freemason active in Cincinnati, Ohio, in the mid-19th century. He published a work entitled The Masonic Ladder: or the Nine Steps to Ancient Freemasonry, which included a catalog of all of his publications associated with freemasonry. He also issued a number of broadside 'carpets', in fact large linen backed posters meant to teach the progression and virtues of freemasonry. He also published a large-format Masonic themed view of Solomon's Temple. He is listed in the as a publisher in 1863 Cincinnati Directory, but by 1870, he's listing has changed to 'Masonic Publisher.' His birth a death dates are remarkably elusive. Learn More...