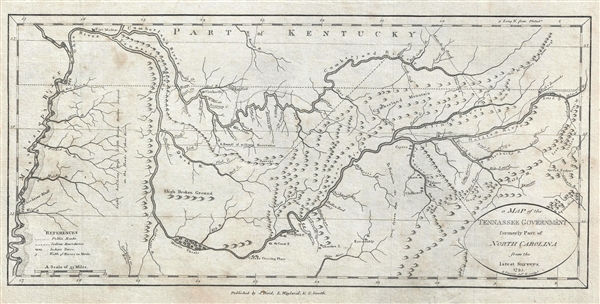 A fine example of one of the second earliest obtainable map of Tennessee, issued 1796, the first year of Tennessee's statehood.

A fine example of one of the second earliest obtainable map of Tennessee, issued 1796, the first year of Tennessee's statehood. This is the rare first state of John Reid's 1796 Map of the Tennassee Government. Cartographically derived from General Daniel Smith's map of 1794, this map covers from the Mississippi River to The Catawba River and from Fort Massae to the Coosa River. The map details American Indian villages, towns, roads, trails, and settlements, among them Nashville, Clerksville, and Knoxville. A key in the lower left provides symbols for public roads, Indian boundaries, Indian towns, and 'Wedth of Rivers in Yards.' Of particular interest are boundary and survey lines relating to the original documents incorporating Tennessee Territory.

The entirety of Tennessee was originally included in North Carolina's coast to coast charter which – for practical political purposes was generally assumed to terminate at the Mississippi River. Tennessee's easternmost counties were thus originally the western most counties of North Carolina. In the years following the American Revolutionary War the government of North Carolina was too depleted to defend its westernmost settlements against American Indian attacks or support their right to navigate the Mississippi River. Tennesseans realized they would have to look to themselves for military support. In 1784 Tennessee's eastern counties rallied and attempted to form the new state of Franklin with John Sevier as governor. Meanwhile, in western Tennessee, the Cumberland Settlements ratified the Cumberland Compact and even brokered a treaty with Spain. Despite bold aims, both the Cumberland Compact and attempts to promote the state of Franklin lacked federal support and were suppressed by North Carolina. This changed in 1789 when North Carolina ratified the constitution and joined the Union. In doing so it gave up the rights to its western land paving the way for Tennessee to peruse statehood in 1795-6.

This is the first edition of Reid's Map of the Tennassee Government. It is identifiable as such by the imprint, 'J. Reid, J. L. Wayland & C. Smith' which appears just below the bottom border. In subsequent editions only J. Reid, or nothing at all, is printed in at this location. The present map was engraved by Benjamin Tanner of New York. This map was published in John Reid's 1796 American Atlas, the second commercial atlas to be printed in the Untied States. Although Reid's atlas is derived from the work of of London cartographer John Russell, this and 14 other maps from the atlas focusing on American states and regions, are new engravings that first appeared in this atlas.