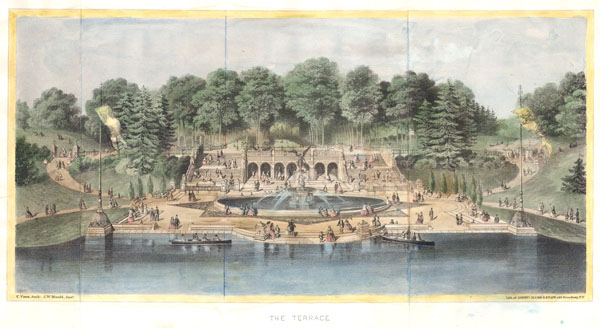 An unusual little view of Bethesda Terrace, Central Park. Bethesda Terrace is located at roughly 72nd street in the heart of New York City's Central Park. Depicts the Terrace from a south facing perspective over 'the Lake' towards the Bethesda Fountain and the sculpture, 'Angel of the Waters.' The arched double staircase behind the fountain was designed by Jacob Wrey Mould. It is important to realize that this part of the park was merely planned, not completed, when this view was made. The central sculpture, 'Angel of the Waters' by Emma Stebbins, was not completed until 1873. Vaux and Olmsted envisioned the terrace as a meeting place in the heart of the park. Today it is one of the most picturesque parts of the park and a popular hangout for artists and musicians. This view was published for inclusion in the 1869 13th Annual Report of the Commissioners of Central Park . On the Central Park: Vaux and Olmsted were awarded the task of designing Central Park in 1853 by the City Common Council. Olmsted's vision drove the overall design while Vaux concentrated his attentions on bridges, buildings, and other structures within the park. The creation of Central Park, which was to consist of some 800 acres of public forest, pathways, promenades, lakes, bridges, and meadows, was a seminal moment in civic urban design. The park itself was designed as a whole with every tree, pond, and bench meticulously planned. Olmsted wrote: 'Every foot of the parks surface, every tree and bush, as well as every arch, roadway, and walk and been placed where it is for a purpose.' Historian Gloria Deak writes, 'There was a staggering amount of work to be done to transform the area into a blend of pastoral and woodland scenery. This involved the design and construction of roadways, tunnels, bridges, arches, stairways, fountains, benches, lamp posts, gates, fences and innumerable other artifacts. It also involved the supervision of an army of about five thousand laborers…Olmsted, to whom most of the credit goes, insisted on seeing the multidimensional project as a single work of art, which he was mandated to create. For this purpose, he ventured to assume to himself the title of ‘artist.'' Today, because of Vaux and Olmsted's efforts, New York Yorkers, ourselves included, have the privlidge of enjoying what is, perhaps, the finest example of a planned urban public recreation area in the world.

Napoleon Sarony (March 9, 1821 - November 9, 1896) was a dashingly handsome Canadian-American lithographer and publisher active in New York in the mid to late 19th century. Sarony was born in Quebec and emigrated to New York City in 1835. He apprenticed under Henry Robinson (fl. 1830/33 - 1850) before working as a lithograph artist for Nathaniel Currier (1813 - 1888). In 1846, he partnered with Currier's apprentice lithographer Henry B. Major to establish the firm of 'Sarony and Major.' From offices at 117 Futon Street, they published under this imprint until roughly 1853, when Sarony split off on his own under the imprint 'Sarony and Co.', still at 117 Fulton. At the time 'and Co.' probably meant Joseph Fairchild Knapp (1832 - 1891), Sarony's apprentice, and Richard C. Major, possibly Henry Major's son. In 1857, a new imprint was established as 'Sarony, Major and Knapp'. According to an advertisement in the New York Times (Feb 16, 1864), Sarony had invested in the business at founding, but was not an active partner, possibly because he was traveling in Europe. It is unclear why Sarony's name was maintained, possibly to capitalize on his fame, as a honorific, or possibly because he owned a major stake. They published under this imprint until 1863, becoming a major concern at 449 Broadway. Sarony's name was formally removed from the partnership in 1863. At the time he was traveling in Europe, mastering the most advanced color lithography and photographic techniques. He is known to have worked in France, Germany, and England. He returned to New York in the 1860s, establishing a photography company at 37 Union Square that became famous for its portraits of late-19th-century American theater icons. In 1891, Sarony, hoping to capitalize on Sarah Bernhardt's fame as 'Cleopatra', paid the stage actress 1,500 USD to sit for a photo session, the modern-day equivalent of 20,000 USD - suggesting a highly prosperous business. His son, Otto Sarony (1850–1903), continued the family business as a theater and film star photographer. As an aside, Sarony's second wife, Louie Sarony, was a known eccentric who would reportedly dress in elaborate rented costumes to walk around Washington Square each afternoon. Learn More...