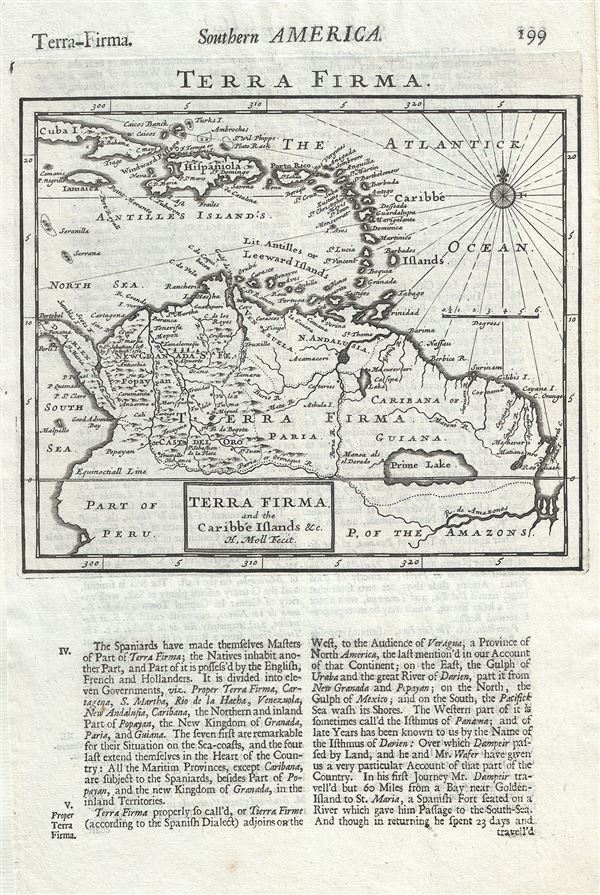 This is a scarce 1701 map of the West Indies and northern South America by Herman Moll. It covers from Cuba south as far as the Amazon River. Includes the modern day nations of Colombia, Venezuela, Ecuador, Guyana and Brazil. Moll notes the city of Manoa and the location of El Dorao west of the Prime or Parima Lake.

Though by this point in history, the general outlines of South America are well established by regular circumnavigations of the continent, the interior is entirely speculative. Many Europeans believed that the most likely site of El Dorado was the mythical city of Manoa located here on the shores of the Lake Parima (Prime Lake), near modern day Guyana, Venezuela, or northern Brazil. Manoa was first identified by Sr. Walter Raleigh in 1595. Raleigh does not visit the city of Manoa (which he believes is El Dorado) himself due to the onset of the rainy season, however he describes the city, based on indigenous accounts, as resting on a salt lake over 200 leagues wide. This lake does have some basis in fact. Parts of the Amazon were at the time dominated by a large and powerful indigenous trading nation known as the Manoa. The Manoa traded the length and breadth of the Amazon. The onset of the rainy season inundated the great savannahs of the Rupununi, Takutu, and Rio Branco or Parima Rivers. This inundation briefly connected the Amazon and Orinoco river systems, opening an annual and well used trade route for the Manoans. The Manoans who traded with the Incans in the western Amazon, had access to gold mines on the western slopes of the Andes, and so, when Raleigh saw gold rich Indian traders arriving in Guyana, he made the natural assumption for a rapacious European in search of El Dorado. When he asked the Orinocans where the traders were from, they could only answer, 'Manoa.' Thus did Lake Parime or Parima and the city of Manoa begin to appear on maps in the early 17th century. The city of Manoa and Lake Parima would continue to be mapped in this area until about 1800.