1715 Renard Map of the West Atlantic, New York to Guiana 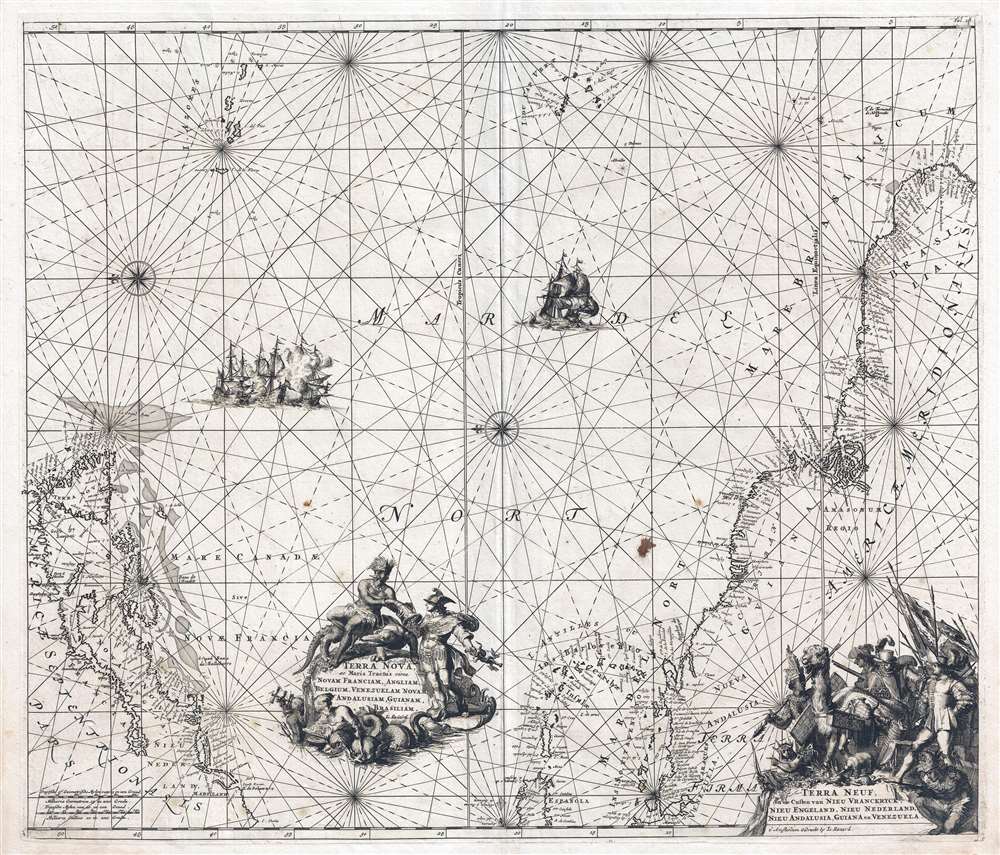 1715 Renard Map of the West Atlantic, New York to Guiana

This is the 1715 L. Renard edition of Frederick de Wit's map of the western Atlantic, covering from Newfoundland to Brazil, including New York, New England, the eastern west indies, and northeastern South America. Oriented with the east, this map covers from Newfoundland south to modern day Paraiba, Brazil, east as far as the Azores and Cape Verde Islands, and west as far as Hispaniola. Cartographically, this map is based upon the Theunis Jacobsz map of c. 1650.

All that is of interest to the Dutchman

When Jacobsz first laid out this unusual projection, it would have been both innovative and comprehensive - illustrating the full field of Dutch interests in the Americas. Jacobsz drew this based upon Blaeu's monumental 1630 West Indische Paskaert and focuses on those areas most interesting to the 17th century Dutchman, the Dutch VOC colonies in Nieu-Nederland (New Amsterdam / New York City) and in Brazil (where the VOC was faring poorly in a war with Portugal over domination of the valuable sugar trade). The Canary Islands and the Azores have no doubt been included as the map's eastern most coverage because they are the traditional gateways to Europe. The Spanish controlled territories to the west, in Mexico, the Caribbean, and the Gulf of Mexico, were of little comparative interest and thus not included.

By the time Renard reissued the map in 1715, the Dutch had long since surrendered control of New York to the British. Nonetheless, the longevity and popularity of this map among Dutch publisher is ample evidence of lingering ambitions to regain their long-lost American colonies.

The preset example is derived from an updated and revised edition of the Jacobsz map by Frederick de Wit. It exhibits de Wit's typical fine engraving and the addition of extraordinary cartouche work. The elaborate cartouches, of which there are two, illustrate the collision of European and native American empires and, in general, the surrender of indigenous American sovereignty and wealth to new European overlords. At sea, finely engraved ships ply the waves and engage in a naval battle.

There are four known editions of the De Wit plate. The first, issued in 1675, has twenty-two at top right. The second, also 1675, names the seas as 'Mare Canada.' The third, 1715, is the present example, with De Wit's imprint replaced by L. Renard. The fourth state was issued in 1745 with the Renard imprint replaced by that of Ottens.

Louis Renard (1678 - 1746) was a Huguenot engraver and bookseller. Renard was born in France in 1678 and moved to the Netherlands in 1703. He acquired many of Frederick de Wit's map plates, which he consolidated with minor updates and revisions into the 1715, Atlas de la Navigation et du Commerce. From about 1706 Renard represented the interest of Guillaume De L'Isle in Holland, a relationship that ended on a sour note in 1718. Renard later sold the plates for the Atlas de la Navigation et du Commerce to R. and J. Ottens, who republished it under their own imprint in 1745. Learn More...


Frederik de Wit (1629 - 1706) was a Dutch Golden Age cartographer active in the second half of the 17th and the early 18th centuries. De Wit was born of middle class Protestant stock in the western Netherlandish town of Gouda. He relocated to Amsterdam sometime before 1648, where he worked under Willem Blaeu. His first attributed engraved map, a plan of Haarlem for Antonius Sanderus' Flandria Illustrata, was issued around this time. He struck out on his own in 1654. The first chart that De Wit personally both drew and engraved was most likely his 1659 map of Denmark, REGNI DANIÆ Accuratissima delineatio Perfeckte Kaerte van ‘t CONJNCKRYCK DENEMARCKEN. His great wall map of the world and most famous work, Nova Totius Terrarum Orbis Tabula appeared one year later. Following the publication of his wall map De Wit quickly rose in prominence as a both cartographer and engraver. He married Maria van der Way in 1661 and through her became a citizen of Amsterdam in 1662. Around this time he also published his first major atlas, a composite production ranging in size from 17 to over 150 maps and charts. Other atlases and individual maps followed. In 1689 De Wit was granted a 15 year Privilege by the Dutch States General. (An early copyright that protected the recipient's rights to print and publish.) He was recognized with the honorific 'Good Citizen' in 1694. De Wit died in 1706 after which his wife Maria continued publishing his maps until about 1710. De Wit's son, Franciscus, had no interest in the map trade, instead choosing to prosper as a stockfish merchant. On her own retirement, Maria sold most De Wit maps and plates at a public auction. Most were acquired by Pieter Mortier and laid the groundwork for the 1721 rise of Covens and Mortier, the largest Dutch cartographic publishing house of the 18th century. Learn More...