1685 Bormeester Map of the World 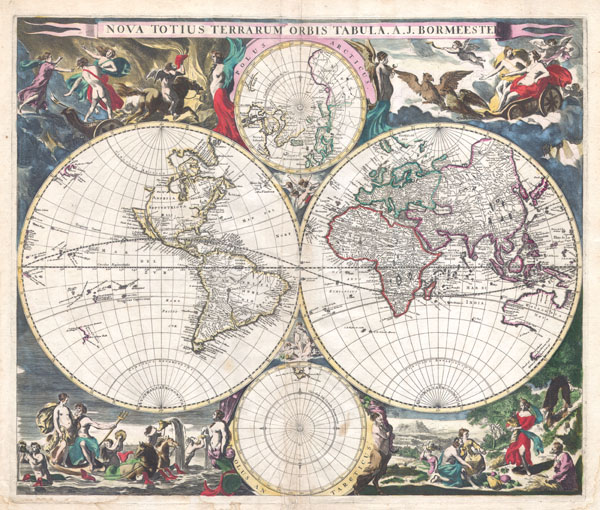 1685 Bormeester Map of the World

A rare variant on an important early Dutch map of the world.

An extremely scarce 1684 double hemisphere world by Dutch map publisher Joachim Bormeester. Depicts the world on hemisphere projection with polar projections to the top and bottom of the main map. Surrounded by allegorical images and border decorations with a classical theme. Heavily based upon, but much rarer than, the Visscher world map of 1658, with similar cartography and Nicholas Berchem's border designs.

We begin our survey of this map in North America. California is depicted as an island. The American northwest is largely blank and unexplored though the land of Anian does appear in the extreme northwest. Anian, first mentioned in the journals of Marco Polo, is the semi-mythical land one arrives at having transited the Northwest Passage. Heading east, the Great Lakes are shown as a single massive inland lake with no western boundary. Southward finds us in South America where both the Amazon and the Rio de la Plata meet in a great lake. Another mysterious and vast inland lake appears in what is roughly modern day Guiana and Venezuela. The Pacific offers a few interesting destination. New Zealand appears only as a line of coast with no northern southern or eastern borders. Several islands dot the South Pacific, but any connection with true geography here seems entirely conjectural. In the Eastern Hemisphere, Africa is displayed according to the 17th century conceptions of the interior. The source of the Nile depicted here conforms to the Ptolemaic double lake theory prevalent at the time. The Niger River system passes through several enormous lakes which are entirely conjectural. Other interior detail in the African continent is extensive but wholly inaccurate. In Asia the Great Wall of China is displayed. Korea is shown as an island. Kamtschaka is not present though Siberia does extend eastward slightly into the Western Hemisphere. Further south, Australia is recognizable if only sketchily mapped. Antarctica remains undiscovered. In the northern polar projection no suggestion is made of Northwest Passage.

Surrounded by elaborate classical motif border images originally drawn by Berchem for Visscher's map. These include the Rape of Persephone, Zeus in his chariot, Demeter offering the gifts of the Earth, and Poseidon riding his chariot out of the sea.

An extremely scarce find. This map has only appeared twice in the last 30 years and appears in the catalogs of almost no major collections.

Joachim Bormeester (16?? - 1702) was an engraver, printer and publisher working in Amsterdam during the late 1600s. Bormeester appears to have worked on occasion with Danckerts and other Dutch publishers of the period. His cartographic works are extremely scarce and rarely appear on the market.


Nicolaes Pieterszoon Berchem (October 1, 1620 – February 18, 1683) was an important Dutch painter working in the middle part of the 17th century. Bercham was born in Haarlem and studied under both Jan va Goyen and Cornelis van Poelenburgh. He is credited with over 800 paintings and is mostly known for his bucolic Italian landscapes. Berchem's partnership with Jan Visscher in the production of Visscher's world atlas was a seminal moment in cartography. Shirley describes Berchem's engraving work, particularly focused on the elaborate borders of Visscher's maps, as "the master forerunner for a number of highly decorative Dutch maps". The work of Berchem and Visscher inspired Dutch cartographers and map publishers for the next 60 years.