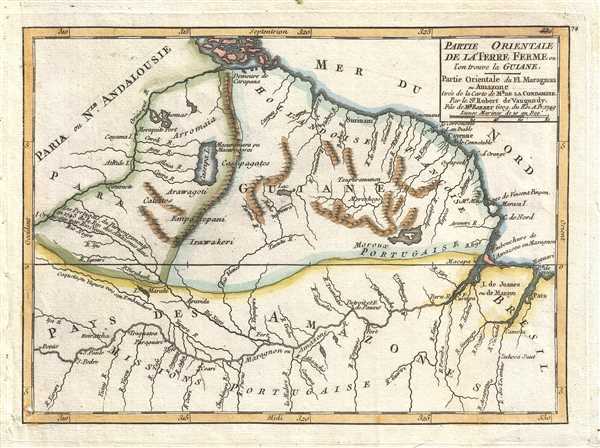 This is a hand colored 1749 Didier Robert de Vaugondy map of Guyana, Suriname, French Guiana, and Brazil. The map stretches from Venezuela to Brazil and from the Caribbean Sea to the Amazon. The Province of Tierra Firme (Terre Ferme) were the mainland coastal possessions of Spain's New World Empire surrounding the Caribbean Sea. The mythical Cassipa Lake is depicted near the center. Cassipa Lake can trace its origins back to the myth of El Dorado and Sir Walter Raleigh. It was said that when Lake Cassipa receded, large deposits of gold would be revealed. Lake Cassipa and another mythical lake, Lake Parima, appeared on many early maps of South America. Through miscommunications with the locals, explorers came to believe that rivers and tributaries were in fact large, fantastic lakes. Four rivers are depicted flowing from Lake Cassipa, all of which run into the Orinoco (Orinoque) River.

Another intriguing, but much less mythical, inclusion on this map is the Marañón, or Amazon, River. The river stretches across the entire lower portion of the map, dotted by towns and tributaries as it winds its way toward its mouth where it drains into the Atlantic Ocean. The map declares that part of Brazil to the 'Amazon country' (Pays des Amazones) and only labels the coastal section of that territory as Brazil.