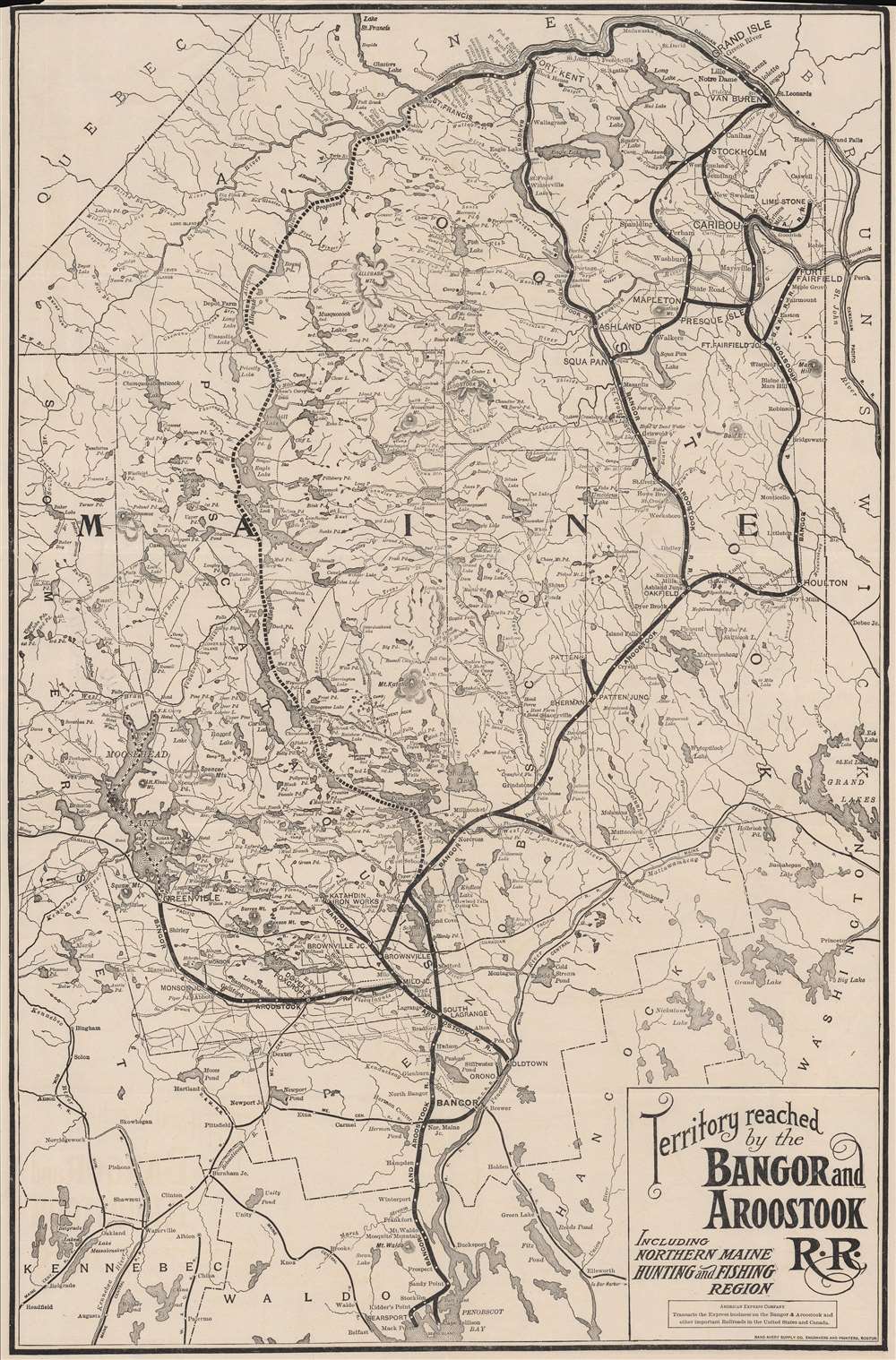 An opening of central Maine that never happened.
$100.00

This is a c. 1910 Rand Avery railroad map of Maine highlighting the Bangor and Aroostook Railroad. Covering from Belfast to Canada, a solid black line traces the Bangor and Aroostook route. Cities, towns, and villages along the route are labeled, including the then closed Katahdin Iron Works. (The iron works closed in 1890.) Thin black lines follow the routes of the Maine Central Railroad and the Canadian Pacific Railroad. Lakes of varying size appear throughout, including Moosehead Lake near the left border.

A dashed line in western Maine illustrates the proposed Allagash Line. The line would have opened the then (and still) mostly uninhabited territory in western Maine to settlement and industry. The railroad believed the line would turn a profit by opening fresh land to the timber industry. This new route would have been a quarter of the Bangor and Aroostook's existing rail network, an incredible feat for any railroad. The line was never built, likely because investors were doubtful of the line's potential. This ephemeral route disappears from Bangor and Aroostook maps soon after this edition.

The Bangor and Aroostook Railroad

The Bangor and Aroostook Railroad operated in Maine from 1891 until 2003. Incorporated in 1891, the Bangor and Aroostook Railroad emerged from a merger of the Bangor and Piscataquis Railroad and the Bangor and Katahdin Iron Works Railway. The railroad steadily expanded during the early 20th century, eventually connecting with the Canadian Government Railways at St. Leonard, New Brunswick, in 1915. In 1895, the Bangor and Aroostook began using heated box cars to haul potatoes, which they continued to do through the 1960s. Even in the post-World War II era, potatoes provided fifty percent of the railroad's income. However, it was not the advent of the interstate highway system that ended the railroad's relationship with potato farmers. During the winter of 1969 - 1970, due to systemic interchange issues caused by the Penn Central Transportation Company (another railroad), a large portion of the potato crop froze in the rail cars after the heaters ran out of fuel. This disaster caused several potato farms to go out of business and those that survived never again used rail transport. Other sources of income for the railroad included inbound chemicals and outbound paper from paper mills, transporting ammunition to Searsport during World War II, and taking coal and aircraft fuel to Loring Air Force Base during the Cold War. The railroad operated a morning and afternoon passenger train into the 1950s. The morning train, the Potatoland, made local stops from Bangor to Van Buren and St. Francis. The afternoon train, the Aroostook Flyer, only stopped at the most popular stations between Bangor and Van Buren. The Bangor and Aroostook was sold to Iron Road Railways in 1995, and after that company went bankrupt in 2002, Rail World acquired the line and incorporated them into the newly formed Montreal, Maine, and Atlantic Railway. The railway changed hands a few more times before being sold to the Canadian Pacific in 2019.

This map was created and published by the Rand Avery Supply Company for the Bangor and Aroostook Railroad c. 1910. While undated, we are able to place the publication of this piece as c. 1910 due to the rail connection between Van Buren and Fort Kent and the presence of the Allagash Line.We note only one other cataloged example, which is part of the collection at the Maine Historical Society.

Very good. Top margin cut to border at right corner.
Looking for a high-resolution scan of this?