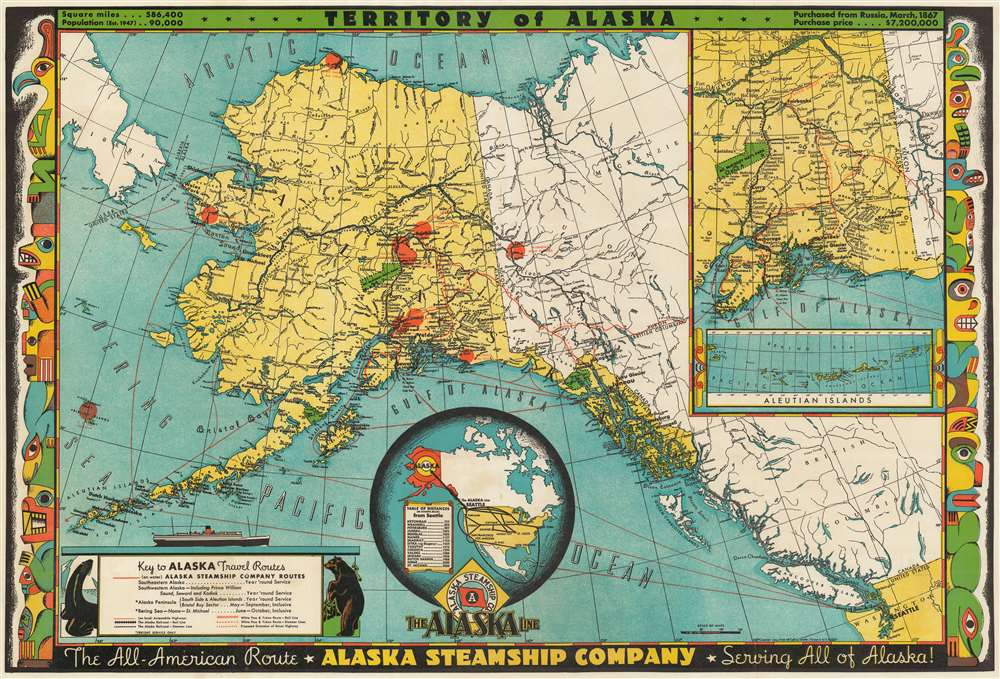 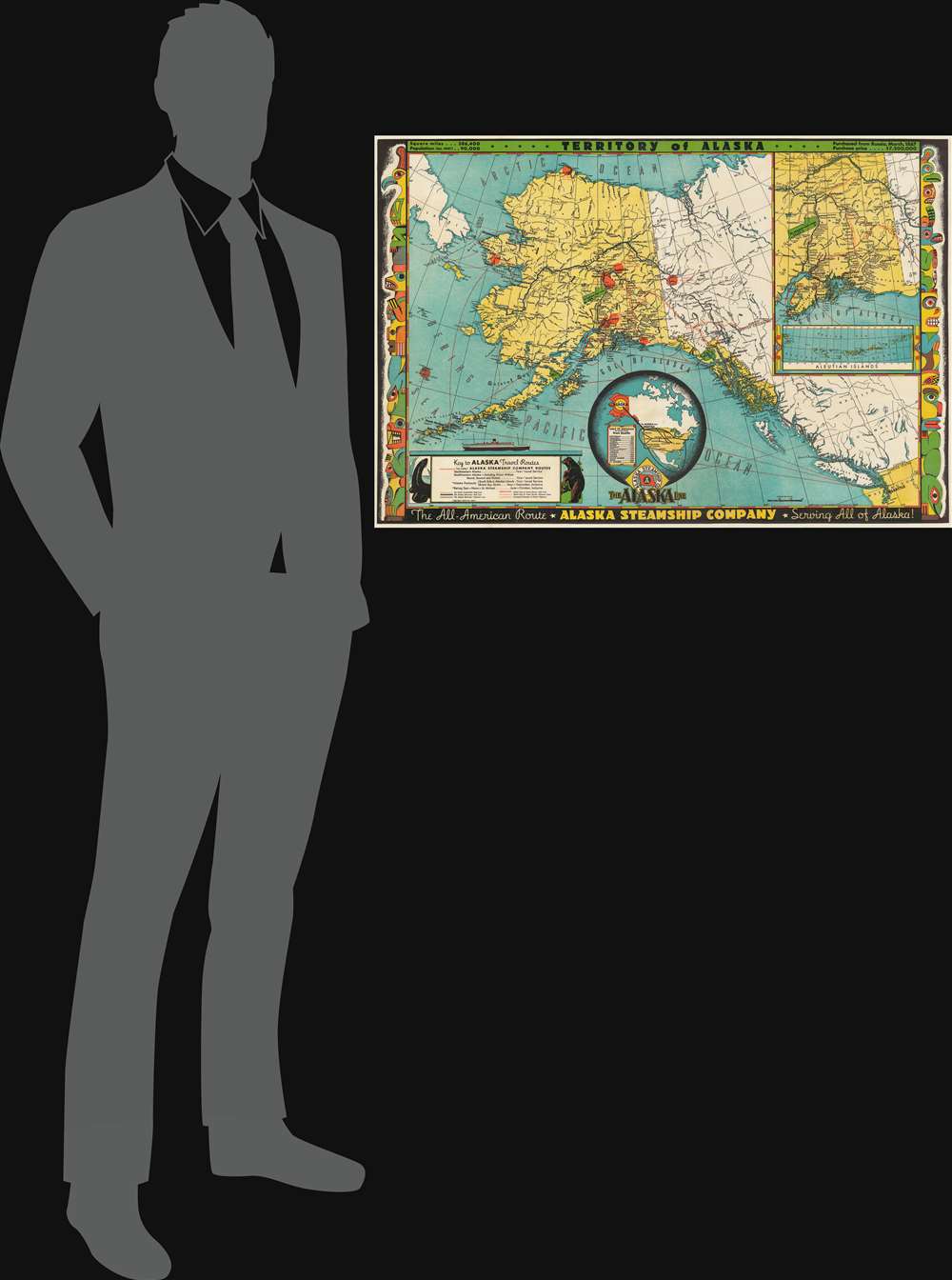 A post war map of Alaska promoting tourism to the territory.

This is a 1949 Frank McCaffrey map of Alaska. The map depicts the region from Russia and the Bering Sea to British Columbia and Washington State and from the Arctic Ocean to the Pacific Ocean and Olympia, Washington. Created for the Alaska Steamship Company, sea routes between Seattle and numerous cities and towns in Alaska are highlighted by red lines, including the route up the Inside Passage. Juneau, Sitka, Anchorage, Fairbanks, Dutch Harbor, and Nome are all labeled, as are numerous smaller towns and villages. Myriad rivers and streams are also illustrated, as are Mt. McKinley (Denali) National Park and Glacier Bay National Park. The Alaska Highway is also noted, as are gold placers and oil fields. The Alaska Peninsula and some of the Aleutian Islands are illustrated and labeled, as are innumerable points, capes, and bays along the Alaska coast along with small islands throughout the region.

An inset map of the region from Anchorage to Fairbanks is situated in the upper right corner and illustrates the Alaska Railroad from Seward to Fairbanks and several different highways. Myriad locations along the railroad and the highways are labeled, as are rivers, mountain peaks, and Mount McKinley (Denali) National Park. A second inset map within the larger one depicts the Aleutian Islands from Attu to Umnak and labels each island. A globe, situated along the bottom border at center, illustrates the many different ways tourists could reach Seattle and then travel on to Alaska via the Alaska Line operated by the Alaska Steamship Company. It also includes a table of distances to various cities in Alaska from Seattle. A key in the lower left corner provides the viewer with important information concerning the different notations used on the map. The whole is flanked on the left and right sides by illustrations of totem poles that are indicative of those created by the Northwest Coast Indian peoples.

This map was created by Frank McCaffrey and published in 1949 for the Alaska Steamship Company. It appears that McCaffrey created at least two different editions of this map, one published in 1936 and the present example which dates from 1949. Of the two, the 1949 edition is scarcer and appears in only nine institutional collections worldwide. We have found only a handful of times when the 1949 edition has entered the private market.

Frank McCaffrey (1894 - 1985) was an American artist, publisher, letterpress printer, and politician. Born in Pittsburgh, Pennsylvania, McCaffrey moved to Spokane, Washington with his family at the age of four. After finding a fascination with printing at a very young age, McCaffrey began an apprenticeship in Spokane and by 1913 he was working as a journeyman printer in Seattle, where he would spend the rest of his life. McCaffrey bought Acme Press, a commercial publishing firm in Seattle, in 1919 and in 1931 founded Dogwood Press as a trademark within Acme. For McCaffrey, his artistic goal when printing a book was for the book's presentation to 'reflect and enhance its content'. At Dogwood, he printed 'for the pleasure of the doing' and saw 'the same opportunity for subtle expression of personality as painting or modeling' in printing. Dogwood served as his creative outlet and was home to some of his 'finest and most limited productions'. Works published by Dogwood even had certain hallmarks, such as stout boards covered with patterned clot and rough, untrimmed page edges. Printing, for McCaffrey, was always a personal pursuit. He sold Acme in 1952, but kept Dogwood, and continued printing. He produced pamphlets for friends and an occasional hardback book. McCaffrey loved to champion Seattle authors and history and, in 1980, he donated a large quantity of printing materials to the newly formed book arts program at Whitman College in Walla Walla, Washington. McCaffrey served for two-and-a-half-years on Seattle's city council and ran for mayor twice. Learn More...