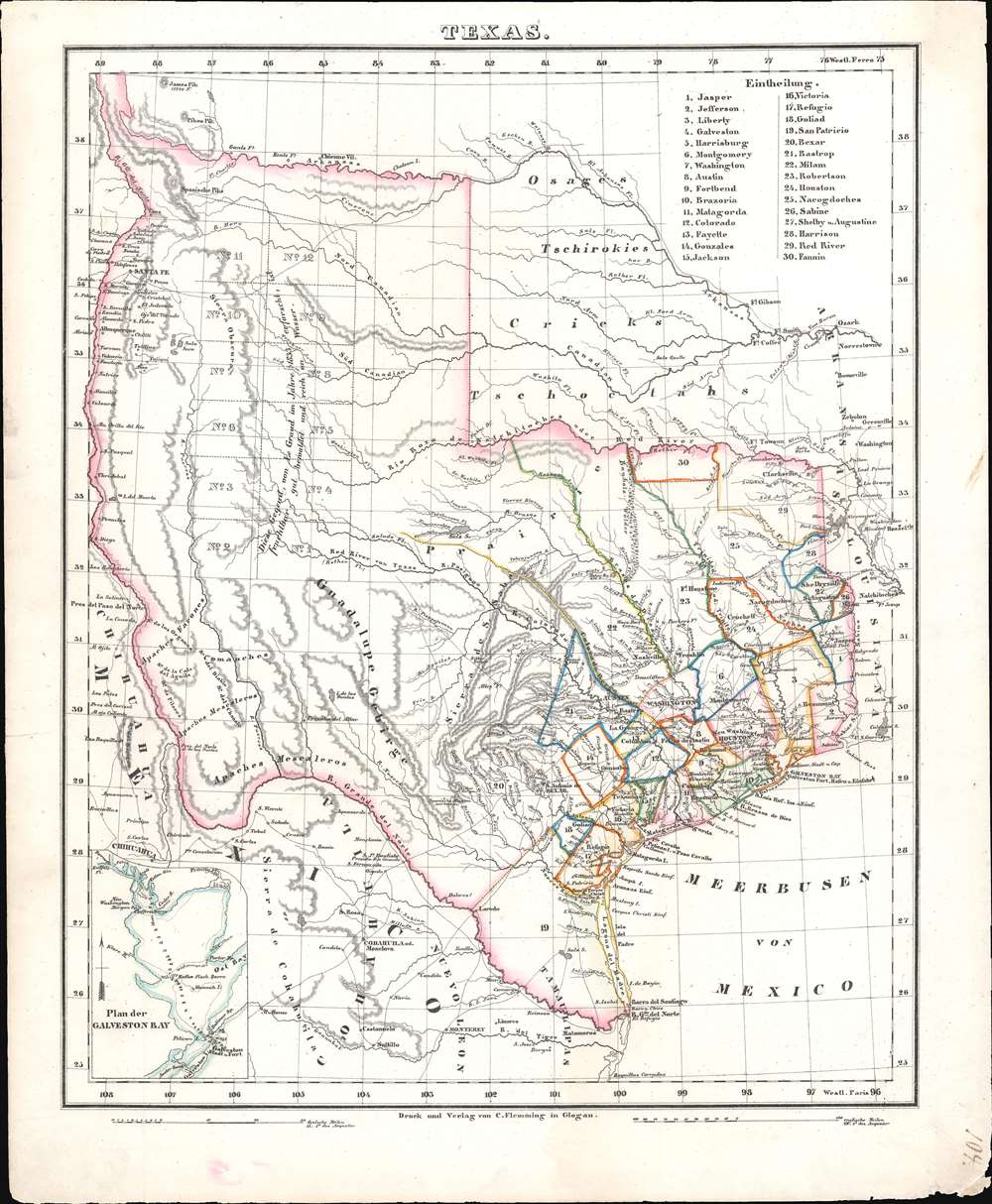 German mapping of the Republic of Texas.

This is a c. 1846 Carl Flemming map of Texas shortly after the Republic of Texas was annexed into the United States (1845). Based on John Arrowsmith's map, Flemming identifies thirty counties in eastern and southeastern Texas, labels them numerically, and provides the county names in a table in the upper right. Numerous settlements are noted along the Rio Grande River in what is today New Mexico. An inset of Galveston Bay is situated in the lower left corner. Flemming also includes an erroneous annotations originally printed on the Arrowsmith map regarding the arid region of western Texas, 'This tract of Country explored by Le Grande in 1833 is naturally fertile, well wooded, and with a fair proportion of water.'

The Republic of Texas was a short-lived nation established in March of 1836 when it ceded from Mexico. Following the independence of Mexico from Spain, the American Stephen Fuller Austin lead a group of 300 Empresarios to settle Texas, near Austin, where they received a grant from the Mexican government. As more Americans moved to Texas, resentment and strife began to build between the American settlers and Mexican authorities. This and other factors ultimately led to the Texan Revolution of 1835 and the declaration of Texan independence in 1836. Texas remained an independent republic until it joined the United States 10 years later in 1845.

The borders of the Republic of Texas were in dispute from the earliest days of the Texan Revolution. The Republic-claimed borders followed the Treaties of Velasco, agreed between the newly created Texas Republic and Mexican leader, Antonio López de Santa Anna. The treaties established an eastern boundary following the 1819 Adams-Onís Treaty between the United States and Spain, which established the Sabine River as the eastern boundary of Spanish Texas and western boundary of the Missouri Territory. The Republic's southern and western boundary with Mexico was more nuanced. Texas claimed the Rio Grande del Norte as its western and southernmost border, while Mexico argued for a boundary much further east at the Nueces River. When Texas was annexed into the United States, the agreement followed the Republic claimed boundary, thus absorbing Mexican claimed territory as far west as Santa Fe. This escalated already existing tensions between the United States, the former Republic of Texas, and Mexico, ultimately triggering for the Mexican-American War (1846 -1848).

This map was created and published by Carl Flemming c. 1846. Two examples are cataloged in OCLC and are part of the institutional collections at Yale University and Texas Tech University. Another example is part of the David Rumsey Map Collection.