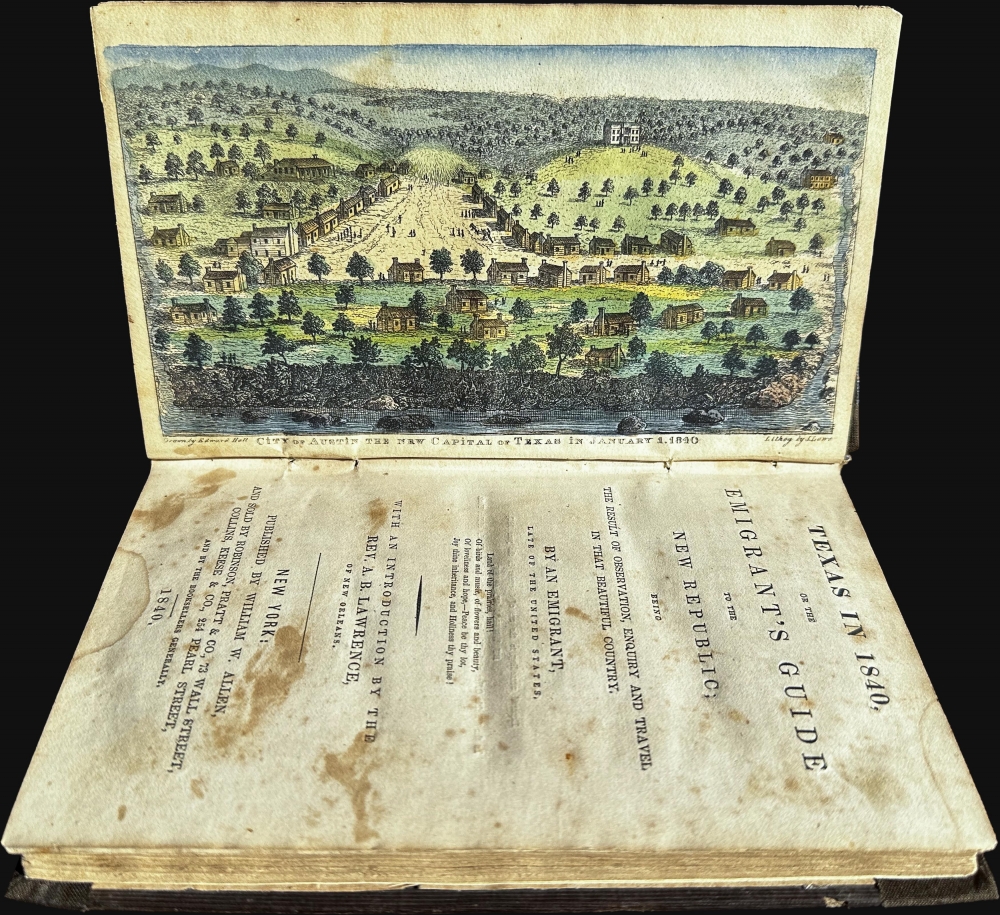 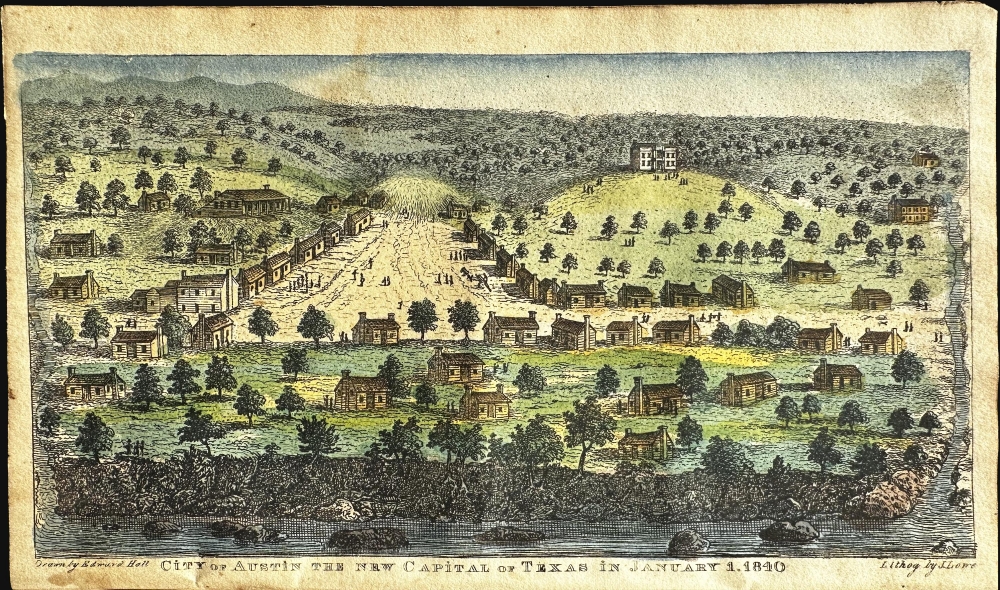 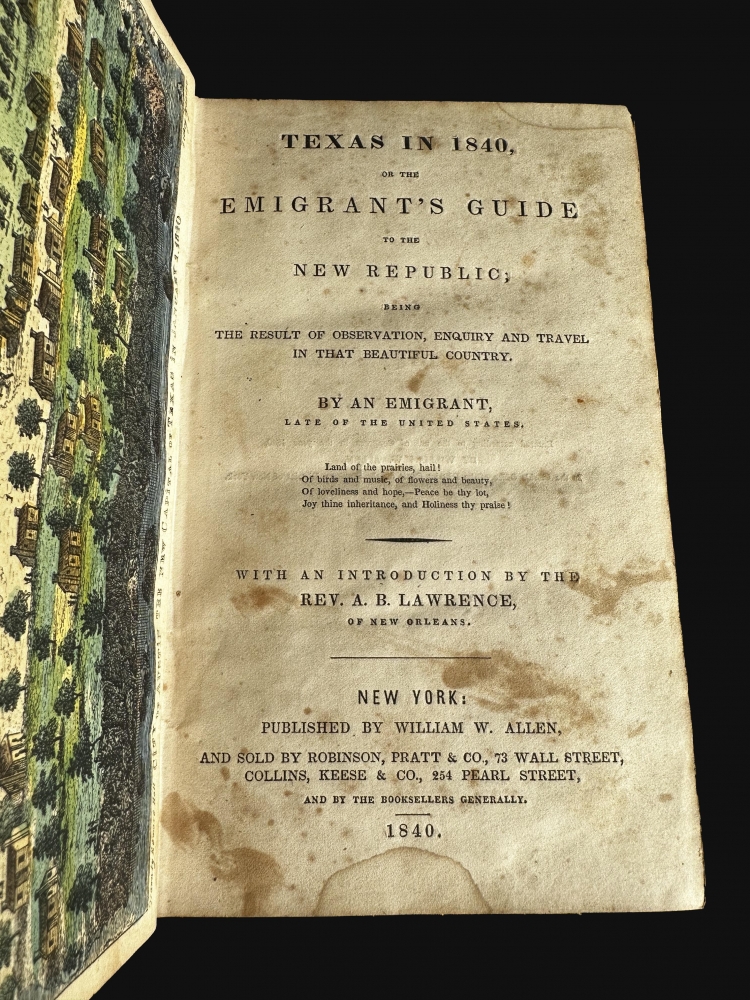 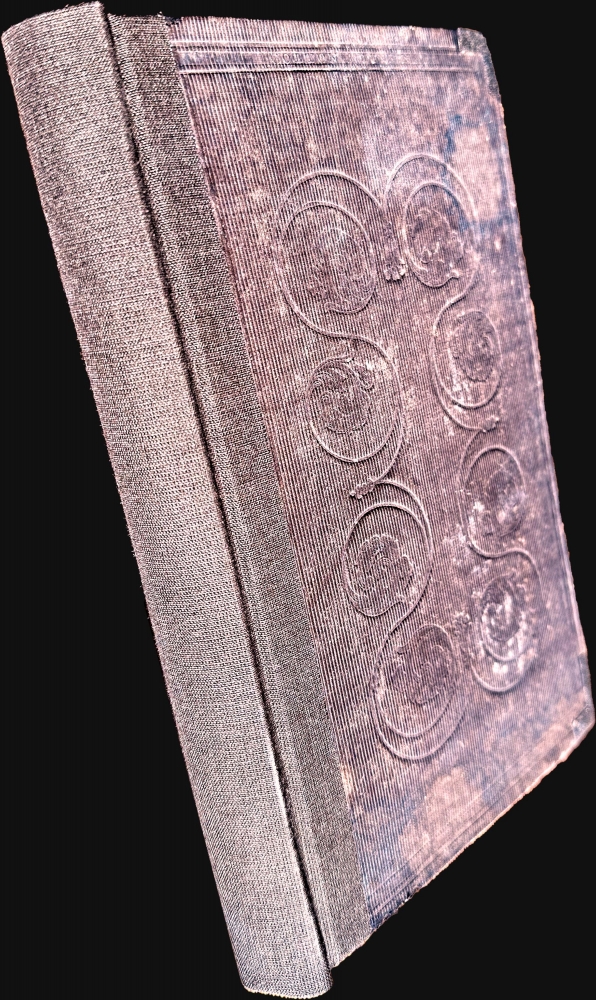 This is the rare 1840 first edition of A. B. Lawrence's Texas in 1840 with a dramatic hand-colored frontispiece being the earliest first-hand bird's-eye view of Austin, Texas - indeed the first such view of a Texan city and one of the earliest of any western town.

This view looks north on Austin presenting it on January 1, 1840, just days after its December 27, 1839 incorporation. It reveals a fledgling frontier settlement on the banks of the Colorado River, amidst gently rolling lightly wooded hills. When Hall drew this view, Austin had about 856 settlers. There are but two streets, Congress Avenue, which would one day lead to the state capital, and Pecan Street, parallel to the riverfront. A large house on a hill to the east of Congress is President M. B. Lamar's house. Another building of note, a two-story structure at the intersection of Pecan and Congress is Bullock House, the first hotel in Austin, built in 1839. A large building on a slight rise to the west of Congress, with a colonnaded porch, is the temporary capitol. Many of the buildings to either side of Congress represent government offices, including a 'State Department', 'War Office', 'Vice President's Residence', Printing Office', and 'Attorney General's Office'. The accompanying relative text features one of the most comprehensive early descriptions of the city.

The volume is unattributed, but it almost certainly the work of A. B. Lawrence, who composed the introduction. Lawrence was a Presbyterian minister and publisher out of New Orleans, who traveled from Galveston to Austin via Houston, Washington-on-the-Brazos, Rutersville, La Grange, and Bastrop. The diary of this journey is included on pages 29 - 80. The work features high praise for Texas, commenting particularly on its exceptional grazing lands, describing how cattle wander naturally 'doubling their number every three or four years.' (page 131). It further described the zoological, botanical, and geological virtues of the republic.

The view was drawn by Edward Hall and engraved by Joshua Lowe. It is debated whether Lowe engraved this in Galveston or New Orleans. If Galveston, it would make it one of only two known engravings issued in the Republic of Texas. Hall's original manuscript sketch survives at the Austin Public Library. The book appears in four editions: 1840, 1842, 1844, and 1845. Only the 1840 and the 1844 editions feature the Austin view, but the latter is redrawn and uncolored. The 1840 edition, published by William W. Allen, appears is perhaps 54 libraries worldwide. Subsequent editions, usually without the view, are more common and better represented. Very scarce.

Edward Hall (fl. 1832 - 1876) was an early emigrant to Texas. He served with partner William Bryan as a purchasing agent for the Texan revolutionary government. We see records where he traveled to New Orleans where he secured loans and grants to fund the revolution. He was also granted some 18,000 acres on Galveston Island. Hall was a declared enemy of Sam Houston. Learn More...


Joshua Lowe (fl. 1836 - 1841) was a New Orleans and Texas lithographer. He maintained New Orleans locations at 75 Chartres and later, after 1838, 34 Canal. Sometime in late 1840, he relocated to Galveston, Texas, where he opened a lithography studio at No. 6, 22nd Street. Only a single work remains from his period, a well engraved stock certificate for the city of Portland Matagorda Company. This is the only known example of engraving completed in the Republic of Texas. Learn More...