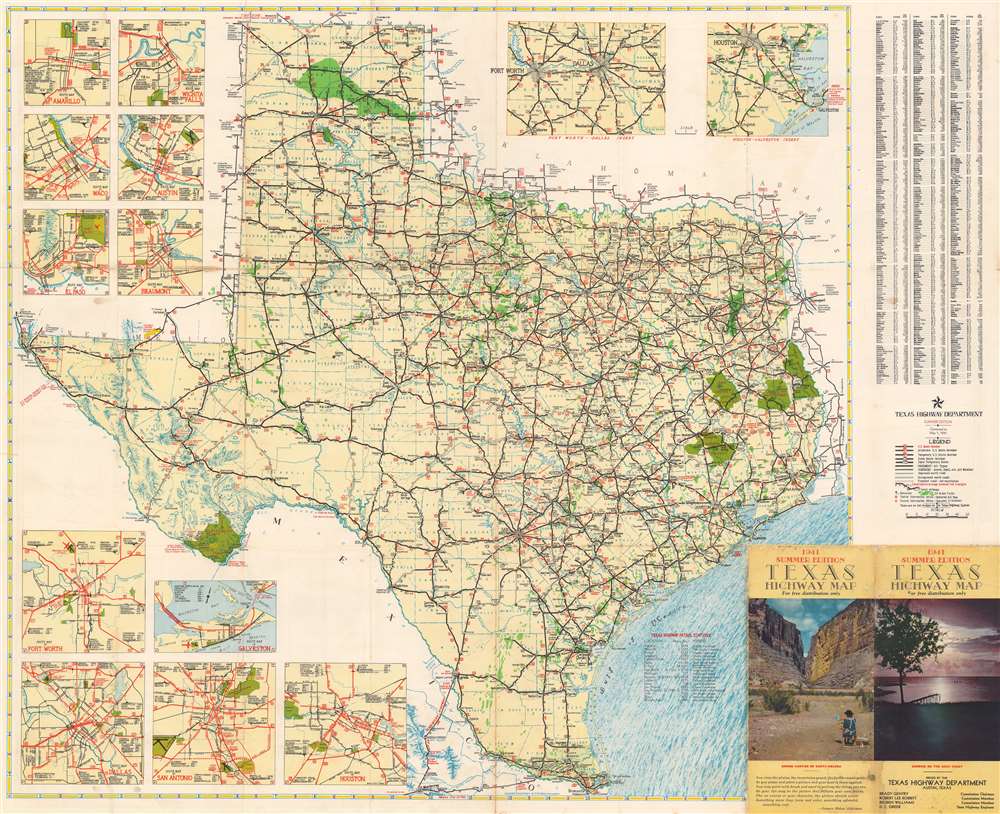 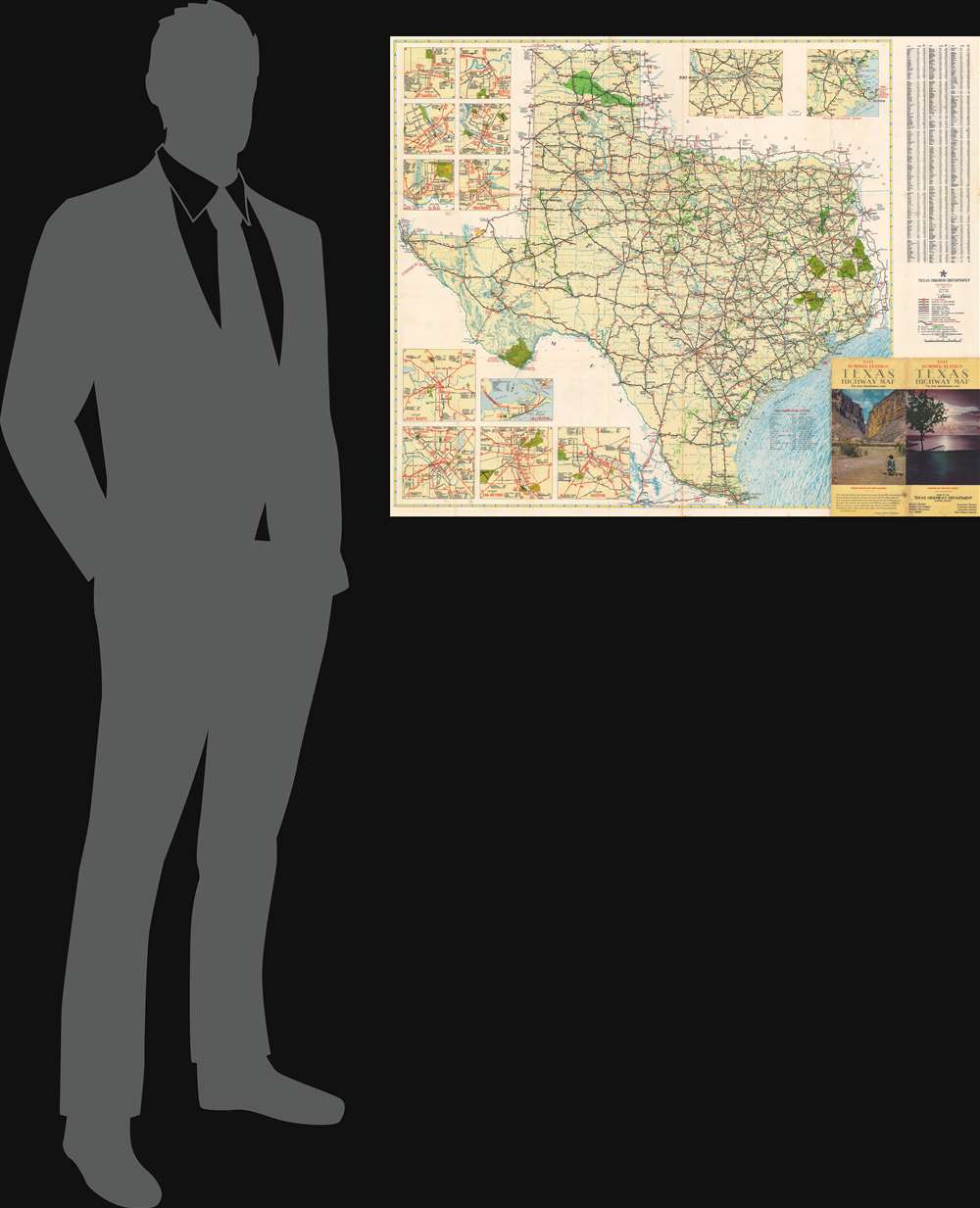 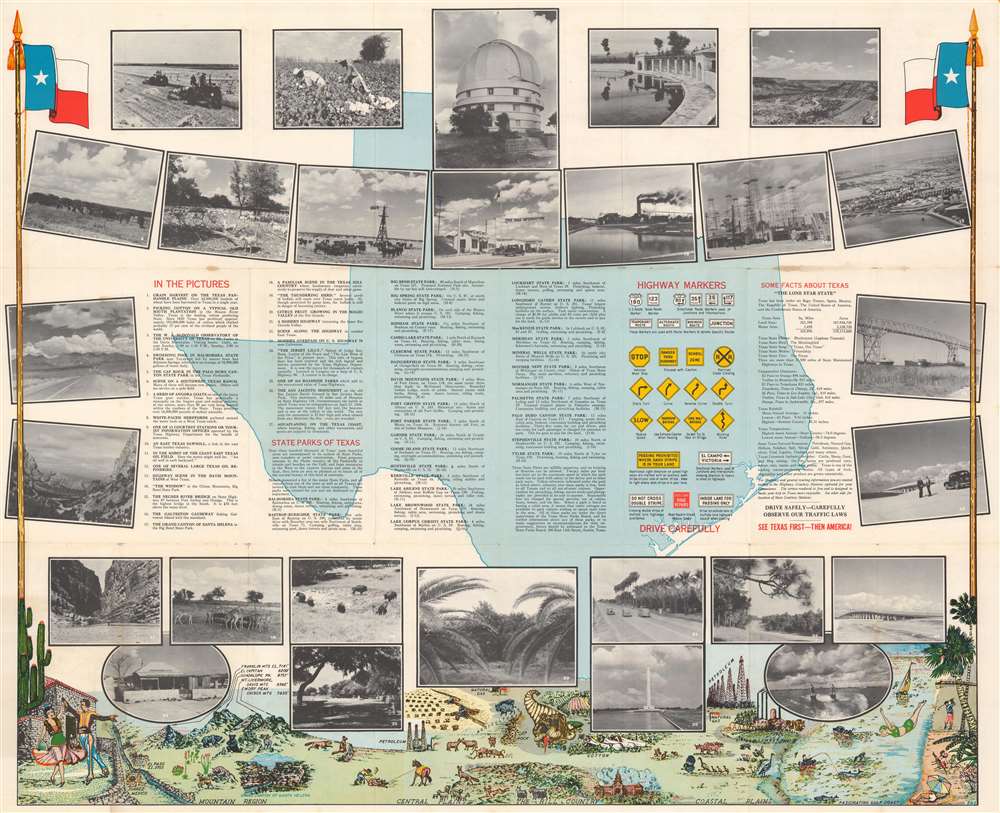 This is a 1941 Robert Martin Stene and Texas Highway Department highway map of Texas. Texas' extensive highway network is illustrated in detail.

The map informs users of different road surfaces, varying from pavement to all-weather gravel and shell surfaced roads, to improved and unimproved dirt roads. Roads that are not maintained by the highway department even appear and are illustrated by two parallel dashed lines. Green highlights national forests, state parks, and, paradoxically, oil and gas fields. Thirteen inset maps focus on important metropolitan areas, including Dallas, Fort Worth, Austin, Amarillo, El Paso, and Waco. An alphabetic index of Texas towns occupies the upper right outside the map's border and provides users with each town's location using the map's grid index and their 1940 population.

Twenty-seven printed photographs adorn the verso and a numerical index informs users what each one represents and many provide short captions. Information about Texas state parks and highway signs appear as well.

This map was drawn by Robert Martin Stene and published by the Texas Highway Department in 1941. Our research indicates that the Texas Highway Department published at least three highway maps per year, a Spring Edition, a Summer Edition, and an Autumn Edition, each of which would be updated with the most recent information. The present example is the 1941 Summer Edition and was corrected to May 1, 1941. Numerous Texas highway maps by Robert Martin Stene are cataloged in OCLC, but none correspond with the present 1941 Summer Edition.

Robert Martin Stene (May 23, 1872 - August 10, 1954) was an American cartographer and photographer. Born on a farm outside Norway Lake, Minnesota, his first job was as a station agent for the Great Northern Railway in Norway Lake. Then, in Fargo, North Dakota, he worked for the Hanson Studio, where he demonstrated a gift for operating a telegraph. This earned him a job as a telegraph operator. He moved to Texas for his health sometime before 1900 and settled in Austin where he worked as a photographer in Journey's Studio. Stene then worked as an advertising agent and telegraph operator for the Santa Fe railroad in Dallas and Galveston for several years before moving to San Francisco to study mapping. From there he joined mining engineers in Arizona and California as a map draftsman. Then, Stene started working as a hydraulic and mining engineer in Arizona, where he surveyed rivers and canyons for dam sites. He also founded a mining company to mine copper in Arizona. At some point during his time in Arizona, Stene organized the Williams River Corporation with the goal of building a dam and generating electricity. Unfortunately for Stene, after he had done the work to find financiers and supporters to build the dam, the project became public, and a different company was formed that took over the project. Stene was out and lost everything. At this point, around 1927, he moved back to Texas and joined the Texas Highway Department as a cartographer. He retired from the Highway Department in 1950. Learn More...