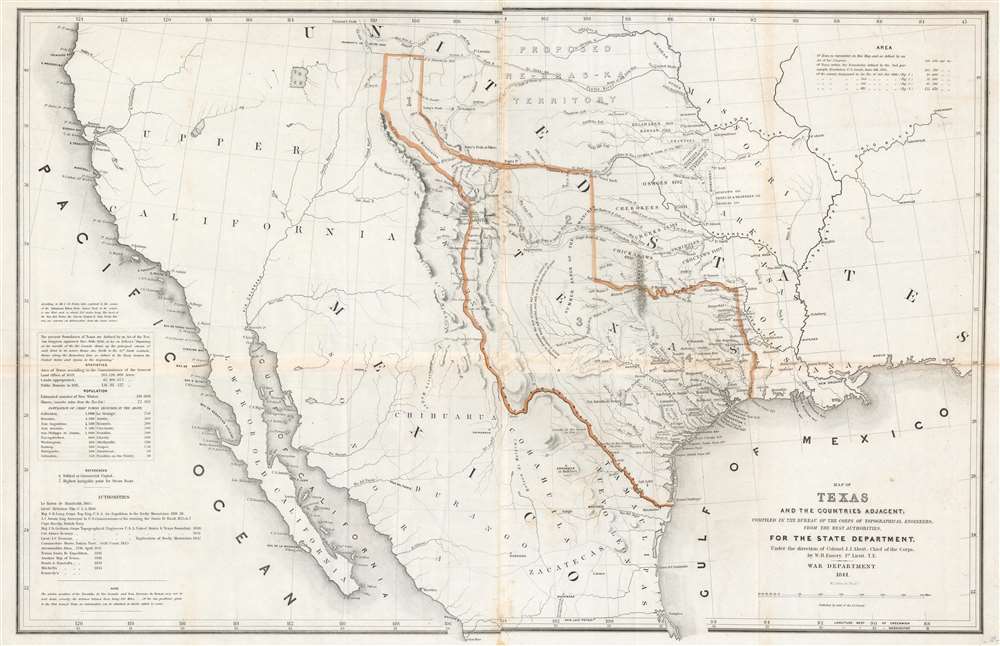 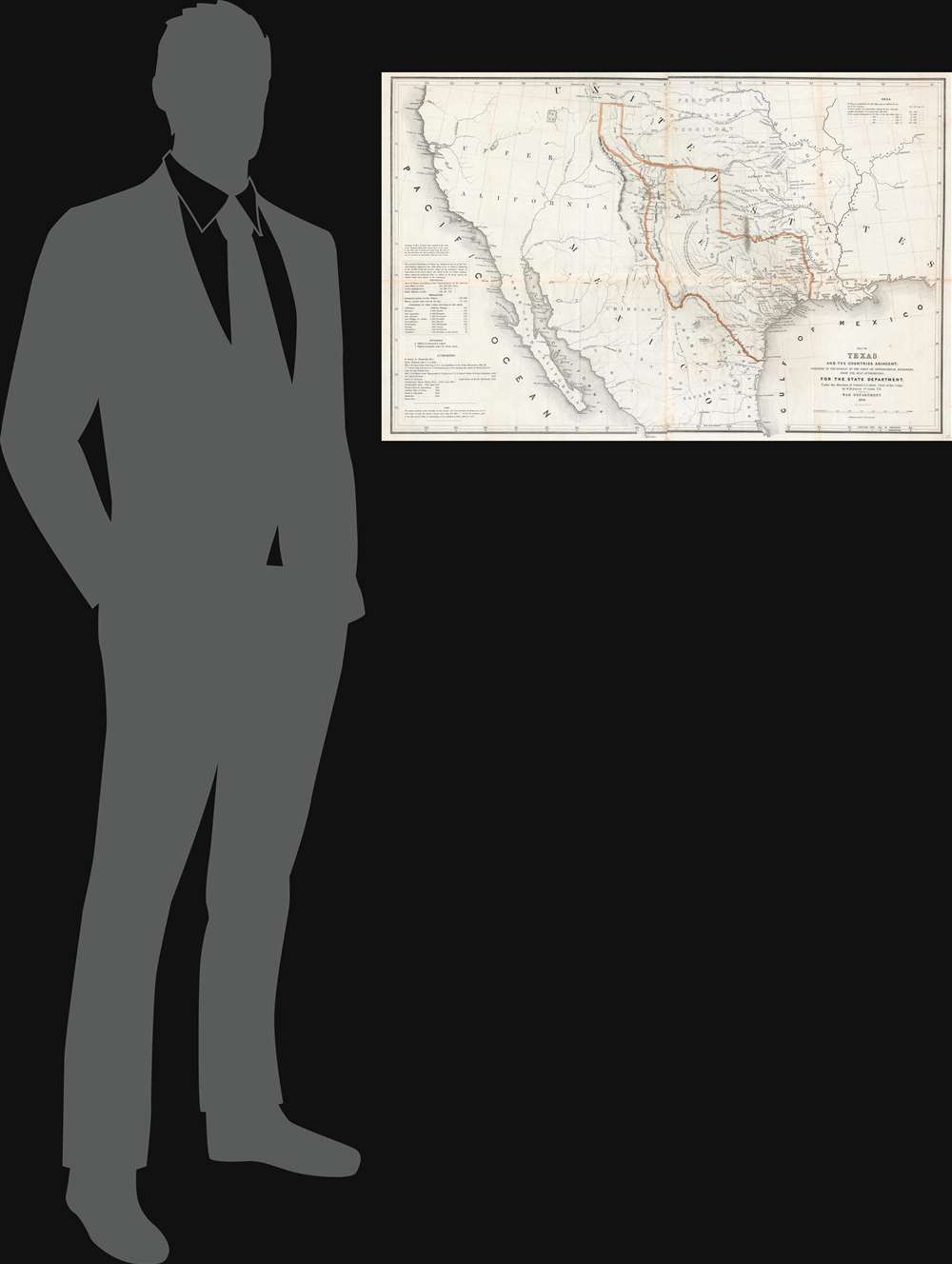 The first scientific mapping of the entire region based on actual observation. - Martin and Martin

A seminal production, this 1844 large-format edition map of the Republic of Texas by the U.S. Topographical Engineer, W. H. Emory, is the most important pre-war map of Texas. Centered on the vast claims of the Republic of Texas, Emory's map offers expansive coverage extending from the Pacific to west Florida and from South Pass (modern day Wyoming) to Tampico, Mexico. This map is significant on a number of levels. First, it is the first scientifically surveyed map of the Texas region. Second, it serves as the official U.S. acknowledgement of the full territorial claims of the Republic of Texas. Third, it is a vital reconnaissance of the Texas region in anticipation of the breakout of the Mexican-American War (1846 - 1848). Fourth, it establishes the Texas claims that would be fought over during the Mexican-American War. Fifth and finally, it lays down the Texas borders that would later be copied by Disturnell in his 'Treaty Map' of 1847, formalizing the U.S-Mexican border.

The Republic of Texas was a short-lived nation established in March of 1836 when it ceded from Mexico. Following the independence of Mexico from Spain, the American Stephen Fuller Austin led a group of 300 empresarios to settle Texas, near Austin, where they received a grant from the Mexican government. As more Americans moved to Texas, resentment and strife began to build between the American settlers and Mexican authorities. This and other factors ultimately led to the Texan Revolution in 1835 and the declaration of Texan independence in 1836. Texas remained an independent republic until it joined the United States 10 years later in 1846.

This map exhibits the Texas border configuration at its fullest expression, expanding northwards with the 'Stovepipe' reaching into modern day Wyoming, and west to include Santa Fe. H. Bailey Carroll in the Southwestern Historical Quarterly (Vol. 50, No. 2) comments on this map:

This map is important even from the antiquarian viewpoint. It was made by men having excellent technical standards for 1844. It reveals in a striking manner the extent of geographical information about Texas and the Southwest....

The map is further important with reference to two boundary disputes having to do with Texas: The map shows clearly that the original assumption on the part of the government of the United States was that Texas was to be annexed with boundaries as defined by the Texan Congress on December 19, 1836. Twelve years before the Treaty of Guadalupe Hidalgo, Texas claimed the area between the Nueces and the Rio Grande. The Old Alcalde, Chief Justice O. M. Roberts, made the classic statement of the case in State vs. Bustamente (47 Tex. 320):

Texas claimed the territory [between the Nueces and the Rio Grande], in defining its boundaries on the 19th day of December, 1836. In 1846, the claim was perfected by possession, and by actual exercise of exclusive jurisdiction, and from that time it was lost by the State of Tamaulipas, in Mexico, for all purposes whatever, whether of judicial action or the exercise of powers relating to eminent domain. And it never afterwards recovered such lost powers.

The disputed western boundary of Texas was substantially, but not entirely, fixed in the Compromise of 1850. This Abert-Emory map is important in showing the Texan claim before the 1850 settlement and in demonstrating that the Texan claim had been accepted as valid by the United States.

The map notes several settlements of interest, some of which shed light on migration patterns. One of these, the 'Kentucky Settlement' appears on the Red River west of the Cross Timbers. This settlement is more properly known as Peter's Colony. The colony consisted of four empresario land grants by the Republic of Texas to a consortium of American and English investors headed by William Smalling Peters. The consortium was headquartered in Louisville, Kentucky, hence the name on the map. The original boundary of Peters Colony started on the Red River at the mouth of Big Mineral Creek, currently in western Grayson County, running south 60 miles, then west 22 miles, then back north to the Red River, and then east along the Red River to the point of origin at Big Mineral Creek. According to the contract the empresarios were required to recruit 200 families from outside the Republic in three years. The ownership of the colony ultimately fell apart due to infighting and lack of immigration, followed by legal problems in the 1850s.

There are two editions of this map, the present large format edition and a roughly half-sized edition prepared for the Senate report. According to Streeter, (1543A)

The order of priority of the two issues of the large-scale map (entry Nos. 1543, 1543A) and of the two editions, one large scale (entry No. 1543) and the other in smaller scale (entry No. 1543B), cannot now be determined, but it is probable that the large-scale map was issued before the edition on smaller scale. A resolution passed June 11, 1844, by the Senate called for the publication of 1000 copies of the map 'provided it can be done for the sum of $400,' and on December 19, 1844, the Senate voted that 5000 more copies be furnished 'provided the cost...does not exceed 12 cents per copy, including paper, printing, pasting and coloring.

Beyond the boundaries of Texas, the map offers significantly less detail, but still much of interest. Near the panhandle the 'Proposed Ne-Bras-ka Territory' is noted. To the west of the stovepipe there are two large unnamed lakes - clearly preliminary illustrations of Great Salt Lake and Utah Lake. Far to the west, just north of San Francisco Bay a 'Russian Establishment', likely Fort Ross, is noted. Fort Ross was the southernmost outpost of the Russian-American Compnay. The map also notes lands granted to various American Indian nations west of the Missouri River, including the Kickapoo, Delaware, Kansas, Shawnee, Ottoes, Cherokee, Seneca, and Quapaws, among others. The routes of Pike and Fremont are noted, although when this map was issued, the full extent of Fremont's explorations had not yet been published.

This map was published by the order of the U.S. Senate. The engraving is generally attributed to William James Stone. There are two editions, the present large format edition and a roughly half-sized edition prepared for the Senate report. Although published contemporaneously, this larger format is often considered to be the first. We note several examples in the OCLC, but it is difficult to assess if they represent the large-format edition, as here, or the more common smaller format.


William James Stone (c. 1800 - 1865) was an English-born American engraver, lithographer, and sculptor based in Washington D.C. Stone emigrated to the United States in 1804 where he studied engraving under Peter Maverick (1780 - 1831) in New York. Stone started his firm in Washington D.C. in 1815 where he capitalized on the printing of government maps and documents. His most significant accomplishment is his 1823 facsimile of the Declaration of Independence – probably the most exact and iconic version of that document ever printed. Stone is said to have worked three years on his copy of the Declaration of Independence. Among his cartographic works are Emory's map of Texas and Graham's 1836 map of Provincetown. Stone retired from printing to pursue sculpture in the 1840s. He died in 1865. Learn More...