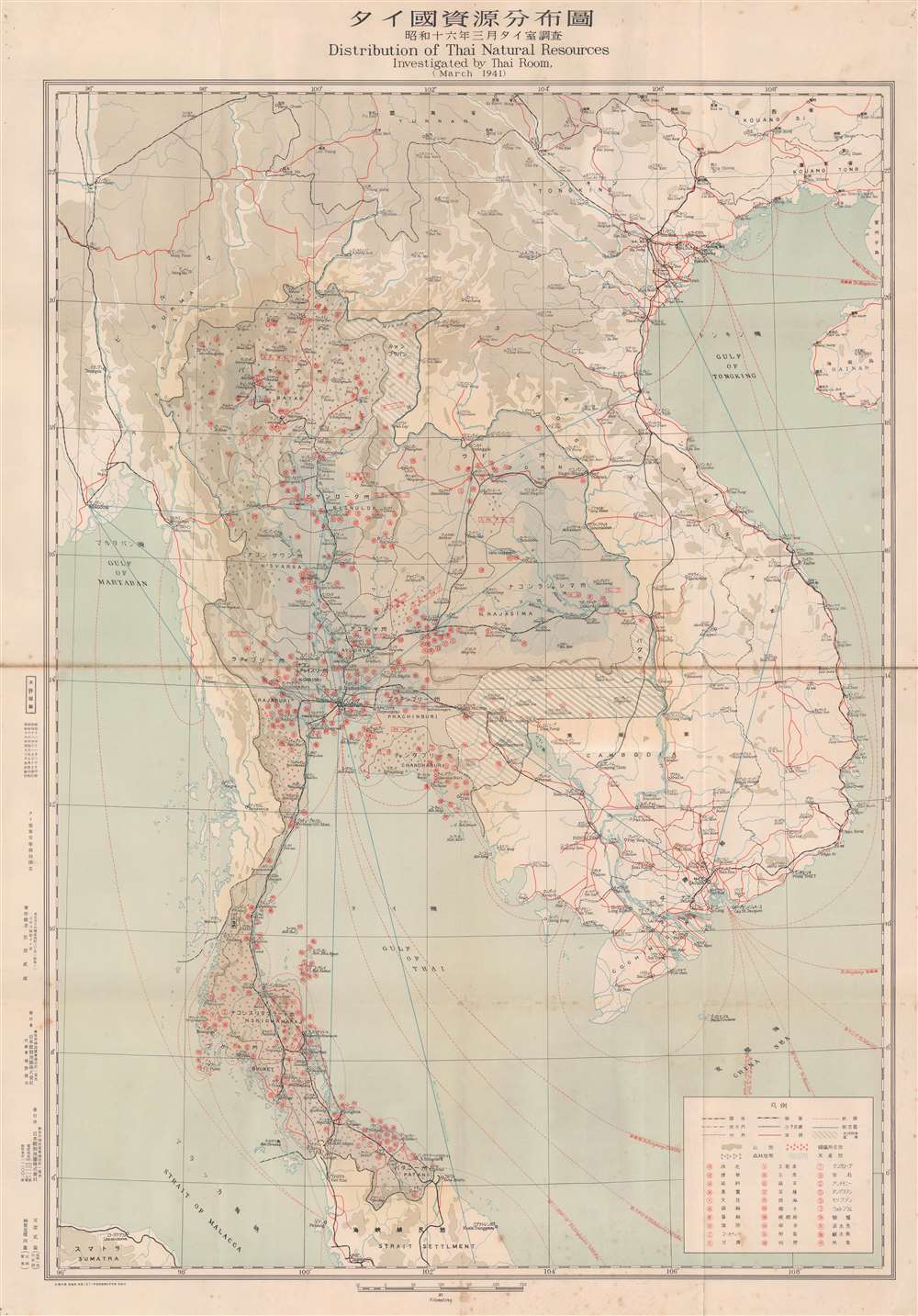 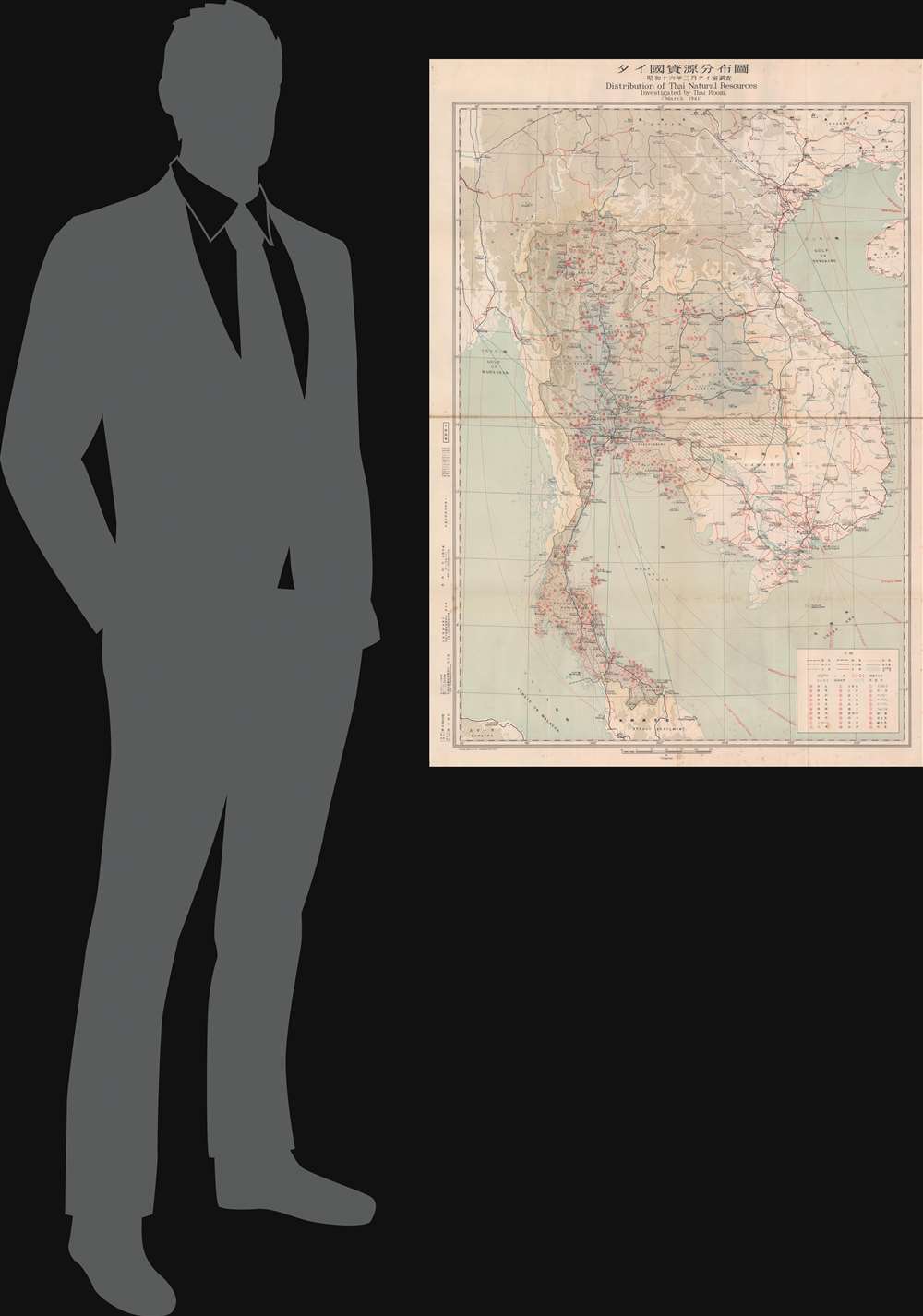 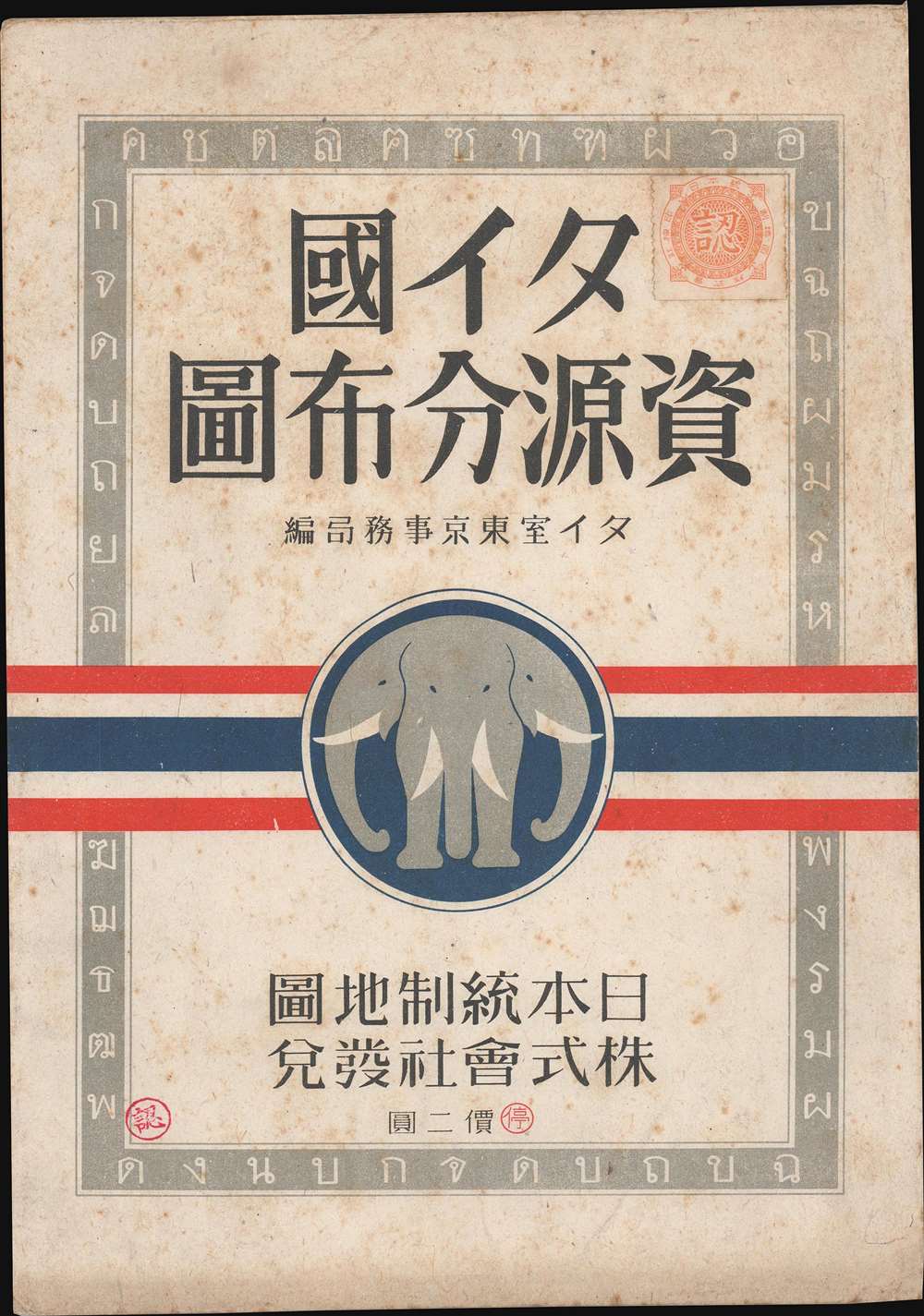 Thailand's natural resources on the eve of invasion.
$950.00

This is a bilingual 'top-secret' English and Japanese 1941 Takeo Miyahara map of Thailand marking all natural resources. Coverage extends from Rangoon to Hainan and from Yunnan, China to Malaya. It was published during a period of tense relations between Japan and Thailand, and would have been a valuable reference during Japan's invasion and occupation of Thailand in December 1941 - in fact it is marked with the Japanese 'top-secret' stamp.

This map is highly detailed, with characters identifying the location of various natural resources, including coffee, rubber, coconut, and sugar cane. After Thailand signed an alliance with Imperial Japan in December 1941, these resources proved vital to maintaining the Japanese war effort. In particular, foodstuffs were in high demand and Japan had no natural source of rubber, so these resources were essential for tires and other war products.

The third column in the legend situated in the lower-right lists minerals indispensable to a modern military. These include antimony (used in flame retardants), tungsten, and molybdenum (used in many different processes, but especially important in the manufacture of steel). Other resources, including tobacco, pepper, pomelos, dyestuffs, jade, hemp, and fish, are also diligently recorded, as are forests (a circle with two dots underneath), mining regions (red circles), and areas of rice cultivation (shaded with blue diagonal lines).

Cities, towns, and villages are labeled throughout in both Japanese and English. Roads, railroads, sea, and air routes are also present, with most of the sea routes stating the destination and distance in kilometers. The illustration of the road and rail network is not confined to Thailand, but instead stretches throughout Southeast Asia and into China.

In the years leading up to this map's production, Thailand maintained a constitutional monarchy but in effect was a quasi-fascist military dictatorship under the leadership of Plaek Phibunsongkhram (known in Western sources as Phibun). Thailand remains one of the few Asian kingdoms to have never been colonized by a foreign power, and in the late 1930s and early 1940s was keen to maintain its independence as the balance of power shifted sharply towards Japan.

On the one hand, Thailand aimed to take advantage of the weakening of Western imperial powers. Most notably, after the fall of France in May 1940 and the Japanese occupation of Indochina in September 1940, Thailand invaded territory the French had wrenched from Siam in the 1890s (the grey shaded area noted in the legend as 'region of returned lost territory' 失地回復區域). Meanwhile, Thailand was concerned about preserving its independence in the face of Japan's rapid ascendence and expansionist militarism. However, with Great Britain distracted by the war in Europe and the United States unable to offer sufficient support, Phibun had little choice but to align with Japan to preserve a modicum of autonomy.

For its part, Japan was primarily concerned with military access to Thailand in anticipation of an attack on British Malaya and Burma. Also, as this map indicates, Thailand was rich in natural resources and had a considerable economy critical to Japan's Greater East Asia Co-Prosperity Sphere.

Japan invaded Thailand on December 8, 1941, in coordination with the Pearl Harbor attack and other invasions in Southeast Asia. After a brief conflict, Phibun agreed to grant Japanese troops passage through Thailand. Soon afterwards, Thailand signed an alliance with Japan and committed troops to fighting against the Allies, including an invasion of Chinese border territories. Throughout the war, Thailand and Japan maintained an uneasy and unpopular alliance.

In response, the Allies supported a Free Thai resistance movement that was also surreptitiously aided by the Thai court (under a regency for the young Bhumibol Adulyadej). Late in the war, Phibun was removed from power as he was distrusted by Japan and disliked within Thailand. Still, he was acquitted of war crimes after the war and made a political comeback with a coup in 1947, and in the following years successfully courted U.S. support by setting himself against Communism.

This map was originally printed and distributed in November 1937. This is a second edition printed on April 5, 1941, and distributed on April 10 (though the English title says 'March 1941'). Miyahara Takeo (宮原武雄) is listed as the author, in conjunction with the Thai Room Tokyo Secretariat (タイ室東京事務局) an organization that worked to expand knowledge about Thailand in Japan, primarily for the government. It was distributed by the Osaka Branch (大阪支社) of Nihon Tōsei Chizu Kabushiki Kaisha (日本統制地圖株式會社) and its representative Ueno Toshio (植野錄夫). The map is held by Cornell University and the Australian National University, and it is scarce to the market.

Miyahara Takeo (宮原武雄; fl. c. 1938 - 1956) was a Tokyo-based author, cartographer, and publisher who was an expert on Thailand at the height of Japanese imperialism in the 1930s and 1940s. He was deeply involved with the Thai Room Tokyo Secretariat (タイ室東京事務局) an organization that produced reference publications on Thailand's economy, society, and politics, at least some of which were specifically for the Japanese government's use. Learn More...

Good. Wear and toning along original fold lines. Verso repairs to fold separations and at fold intersections. Some foxing.