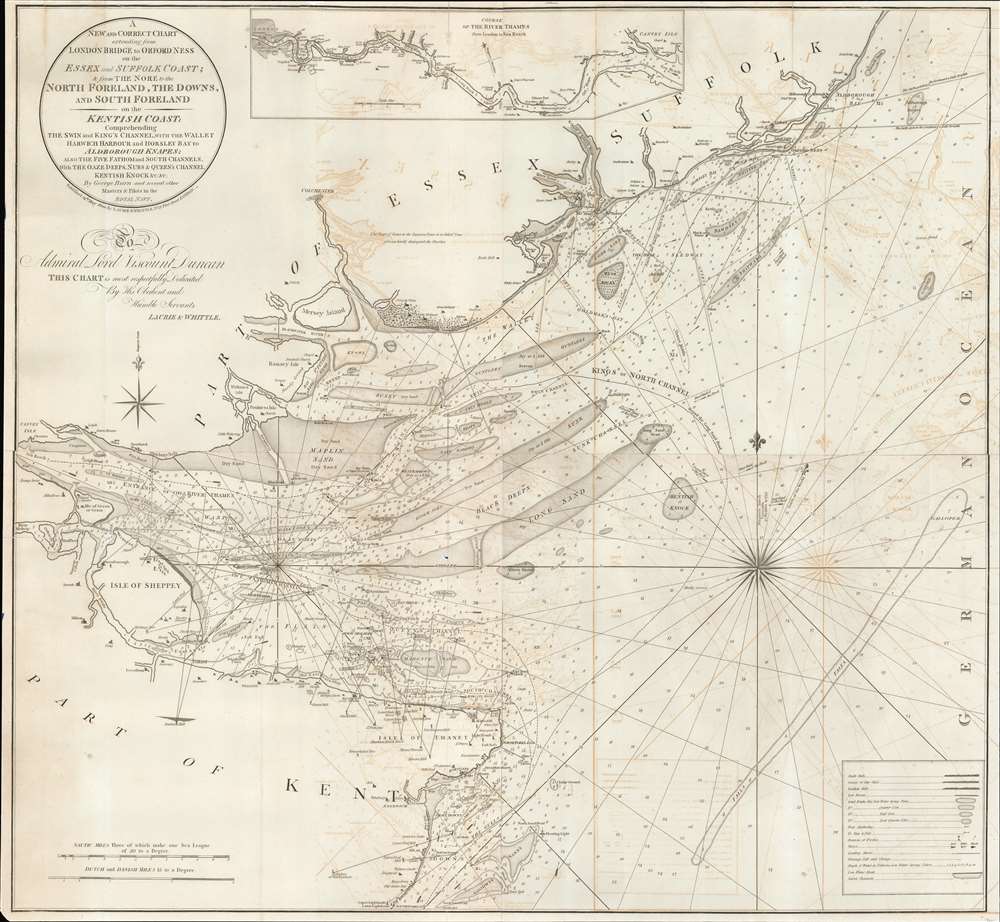 A new and correct chart extending from London Bridge to Orford Ness on the Essex and Suffolk coast and from the Nore to the North Foreland, the Downs, and South Foreland on the Kentish coast : comprehending the Swin and King's Channel, with the Wallet, Harwich Harbour, and Horsley Bay, to Aldborough Knapes, also the Five Fathom and South Channels, with the Oaze Deeps, Nubs and Queen's Channel, Kentish Knock andc., andc. By George Burn and several other masters and pilots in the Royal Navy.
1800 (dated)     35.5 x 39 in (90.17 x 99.06 cm)     1 : 5500000

An impressive 1800 George Burn large format blueback nautical chart or maritime map of the entrance to the Thames River, England. The map covers parts of Kent, Essex, and Suffolk. It details the Entrance to the Thames River with its many shoals and coastal communities. S small inset map at the top of the chart continues the map westward from Canvey Island to London, with depth soundings and river towns noted. Throughout there are thousands of depth soundings in fathoms.

The map is dedicated to Lord Viscount Adam Duncan (1731 – 1804). Duncan was a British admiral famous for defeating the Dutch fleet offer Camperton on October 11 of 1797. Duncan was awarded the Large Naval Gold Medal and an annual pension of £3,000, to himself and the next two heirs to his title - this was the biggest pension ever awarded by the British government. Additionally, he was given the freedom of several cities, including Dundee and London. Laurie and Whittle, no doubt sensing a potential patron with influence at the Hydrographic Office, chose this apt map to court his attention.

This map drawn by George Burn, a British Naval officer and was issued as chart 2 in Laurie and Whittle's Channel Pilot published in 1800.