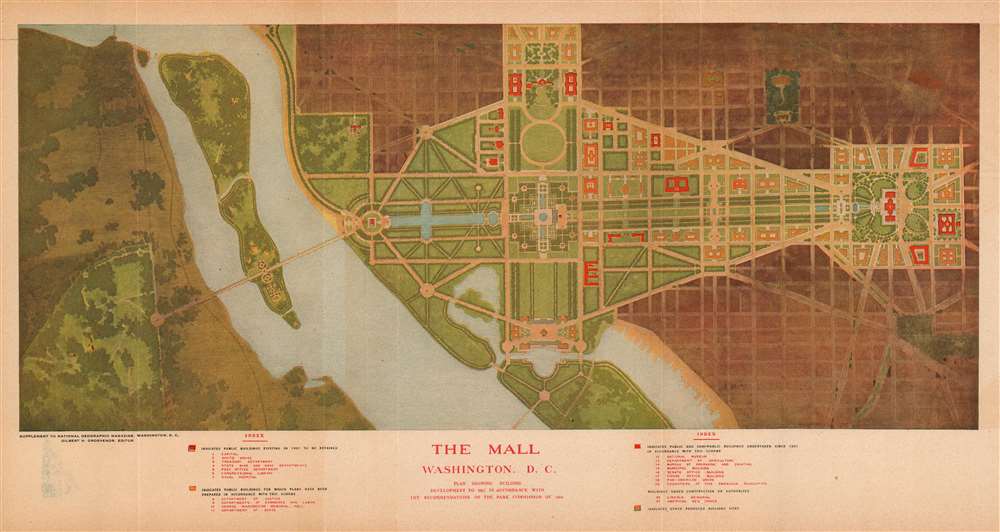 Details plans to rejuvenate the National Mall and the surrounding area.

This is a 1915 National Geographic Society city plan or map of the National Mall in Washington, D.C. Depicting the region from Arlington National Cemetery to the Library of Congress and from Lafayette Square to where the Thomas Jefferson Memorial is today. Twenty-one buildings are illustrated around the Mall. Some, including the White House (No. 2), the Capitol Building (No. 1), the Library of Congress (No. 6), and recently constructed House and Senate office buildings, are shaded red, indicating that they had been built before 1901 or had been built between 1901 and 1915. Other buildings, such as buildings for the Departments of Justine, States, Commerce, and Labor, were proposed as part of the McMillan Plan, upon which this map was based.

The McMillan Plan, unveiled to the public in 1902, was a comprehensive planning document meant to guide the development of the park system and monumental core of Washington, D.C. The report was written by the Senate Park Commission, popularly known as the McMillan Commission after its chairman, Senator James McMillan of Michigan. Charged with reconciling competing plans for rejuvenating the 'mediocre architecture and poor-quality public spaces,' among the commission's members were landscape architect Frederick Law Olmstead, the designer of Central Park in New York, architects Charles F. McKim and Daniel Burnham, and renowned sculptor Augustus Saint-Gaudens. The commission (except for Saint-Gaudens, who was fighting cancer at the time) spent nearly three months in Europe touring the Old World's grandest manor homes, urban landscapes, and gardens. This 'grand tour' resulted in a 171-page report, formally known as 'The Report of the Senate Park Commission. The Improvement of the Park System of the District of Columbia'. Seventy-one pages were dedicated to the National Mall, and the remaining hundred pages detailed the commission's suggestions for improving the city's park system in general. The National Mall proposals received the most detailed work. Some of the suggestions included the construction of public museums, office buildings, and other attractions along the north and south sides of the National Mall, the construction of a Beaux-Arts bridge between West Potomac Park and Arlington National Cemetery, and formal gardens and terraces around the base of the Washington Monument. The complete proposal was never formally adopted due to opposition by Speaker of the House Joseph Gurney Cannon, who was offended that the Senate had not included the House in the commission. Nonetheless, many of the McMillan Plan's elements have been implemented across the city, including the public museums and office buildings, as stated above. The gardens and terraces around the Washington Monument were deemed unsafe, as they would likely have destabilized the Monument. The bridge between West Potomac Park and Arlington National Cemetery was finally approved, after President Warren G. Harding got stuck in traffic for three hours during the dedication of the Tomb of the Unknown Soldier. The McMillan Plan still influences construction projects in Washington, D.C. to this day.

This map was created for and published in the March 1915 edition of National Geographic Magazine. Five examples are cataloged in OCLC and are part of the institutional collections at the Library of Congress, George Washington University, the Rochester Museum and Science Center, Ball State University, and the Bibliothèque nationale de France.

The National Geographic Society (NGS) (January 13, 1888 - Present) is one of the largest non-profit educational and scientific organizations in the world. Headquartered in Washington, D.C., The National Geographic Society focuses on geography, natural scent, archaeology, the study of world culture and history, and the promotion of environmental and historical conservation. Its founding principle 'to increase and diffuse geographic knowledge' still guides the Society to this day. The organization's official magazine, National Geographic has been published continuously since 1888. It was published worldwide in almost forty languages as of 2015. The Walt Disney Company acquired a controlling interest in the magazine in 2019. Learn More...