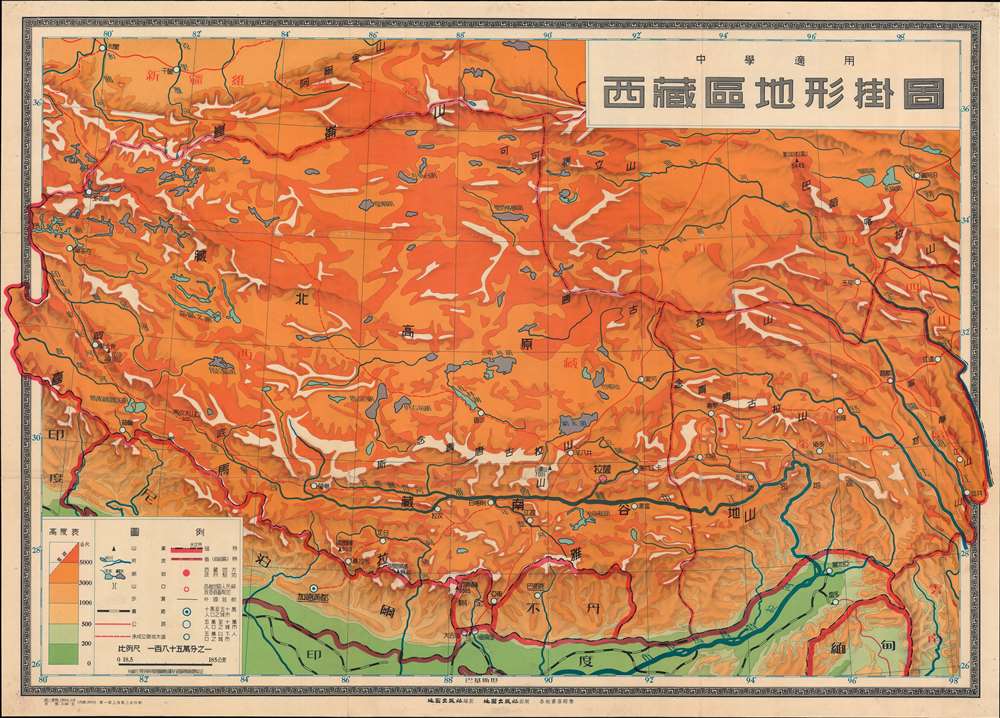 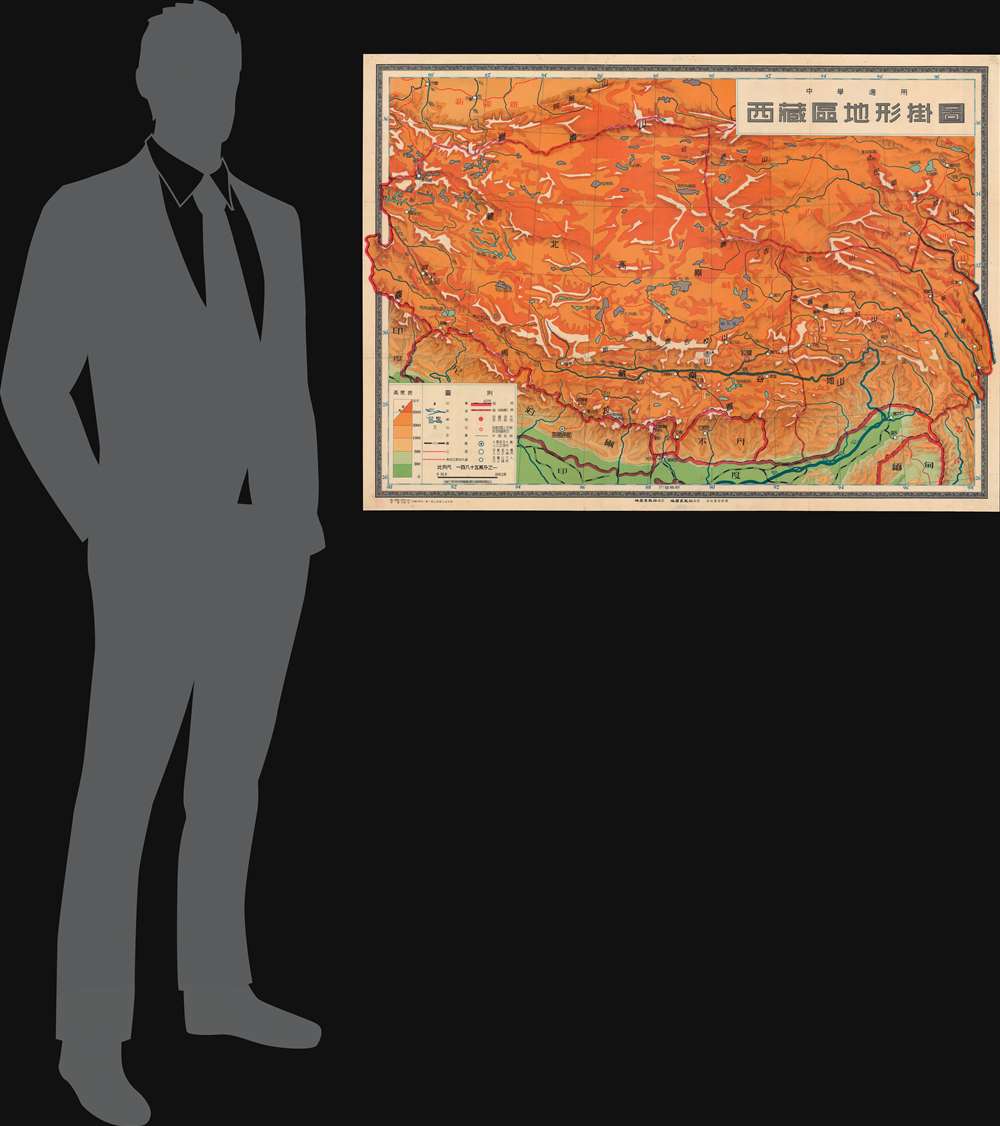 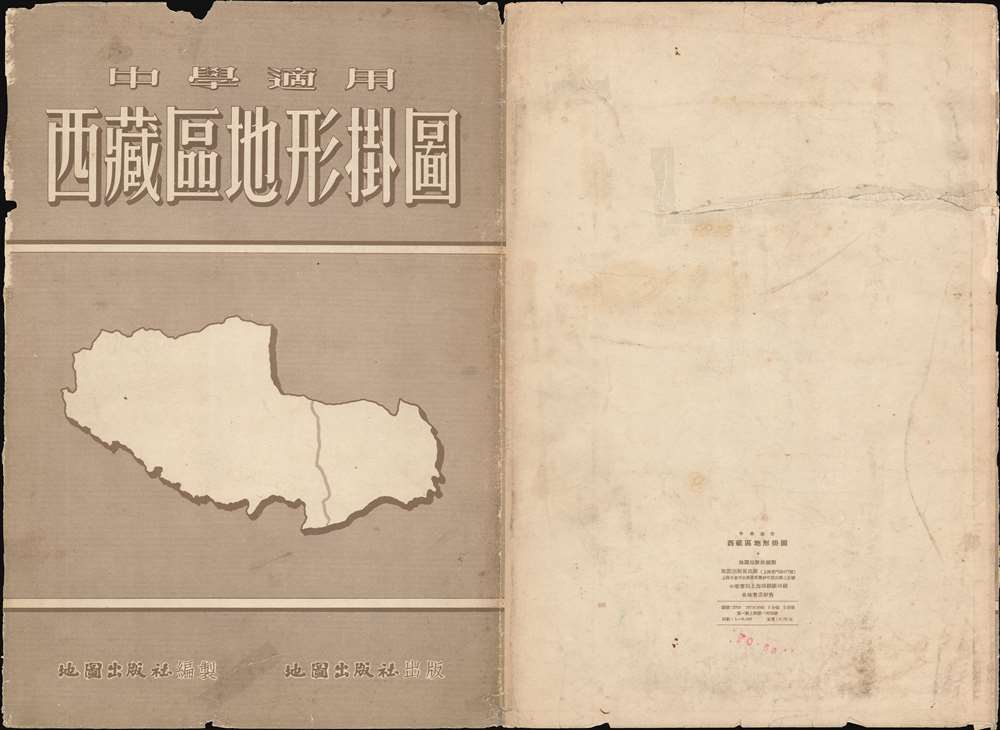 Issued as Tibet was being invaded by the PRC.

This is a scarce 1950 Chinese wall map of Tibet issued by the Communist Party to propagandize the October 1950 invasion of Tibet by the People's Liberation Army. The large-scale map covers all of Tibet showing terrain, cities, and major transportation networks. It was ostensibly drawn for use in classrooms, but the map is part of a broad effort to generate support for Chinese sovereignty over Tibet as well as to legitimize their claims.

Prior to 1950, Tibet maintained a kind of autonomy. Although both the Qing and the Republic of China claimed nominal suzerainty over Tibet, it was so far away, remote, and slimly populated, that it maintained a de facto independence. Moreover, China had its own problems, the 1911 Xinhai Revolution, the fractious Warlord Era (1916 - 1928), the Chinese Civil War (1927 - 1949), and the Second Sino-Japanese War (1937 - 1945). This changed with the rise People's Republic of China (PRC) after World War II. The PRC under Mao Zedong (毛泽东; 1893 - 1976) came to power in China in October 1949 and immediately asserted political claims over Tibet. By June, they received international sanction from the UK and other countries - under the condition Tibet remain an autonomous region - this was largely ignored. China and Tibet went through months of negotiations, with Tibet asserting its independence, but agreeing to a 'priest-patron' relationship with China. China argued for full sovereignty. In October, 1950, as negotiations in Llasa were breaking down, the Peoples Liberation Army marched into Tibet easily overrunning the largely pacifist Tibetan resistance. At the same time, the PRC launched a propaganda campaign within China to foster popular support for the move. Afterwards, the PRC flooded Tibet with Han Chinese farmers loyal to Beijing, beginning the Sinicization of Tibet. The Dali Lama went into Exile after the Tibetan Revolt of 1959 - where he remains.

Very good. Wear on old fold lines and slight loss at fold intersections. Reinforced on verso along old folds. Pinholes to margins.
Looking for a high-resolution scan of this?