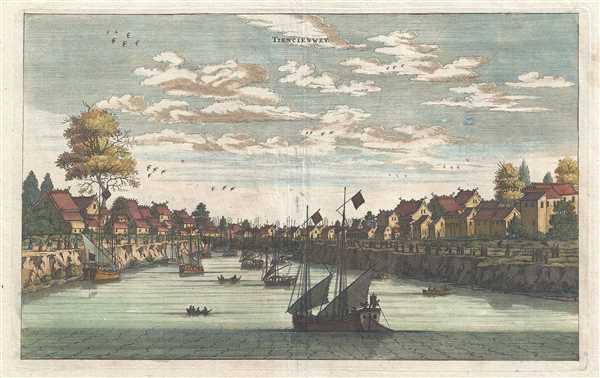 A view of post-Qing conquest Tianjin.

This is a 1670 Pieter van der Aa map or view of Tianjin, formerly romanized as Tientsin or Tiencienwey, China. The main focal point is the river, which dominates the center of the piece. Traditional Chinese Junks, an ancient kind of Chinese sailing ship, are anchored both in the middle of the river and along the left bank. Row boats appear to be ferrying people back and forth either between the various boats or between the boats and the riverbank. More masts are easily discernable that boats, as they stand in sharp contrast with the blue, cloud-dotted sky, but the ships blend in to the riverbank. Rather impressive looking houses line both banks of the river, most of which have two or three stories. A solitary tree is in evidence on the left bank, although other bushes and possible pine trees are discernable. More trees appear on the right bank, although these are all behind the houses. Several groups of birds fly across the sky, and people line the riverbank, possibly to say hello or goodbye to arriving or departing relatives/friends/neighbors, or to trade with the river-going merchants.

Created during the final stages of the Qing conquest of the Ming, this view comes from a time of transition. The Qing were the last imperial dynasty in China, and was the second conquest dynasty to rule all of China. By 1670, the violence and civil war had only recently ended in southern China. Although fighting would continue until 1683, when Taiwan fell and became a part of the Qing Empire.