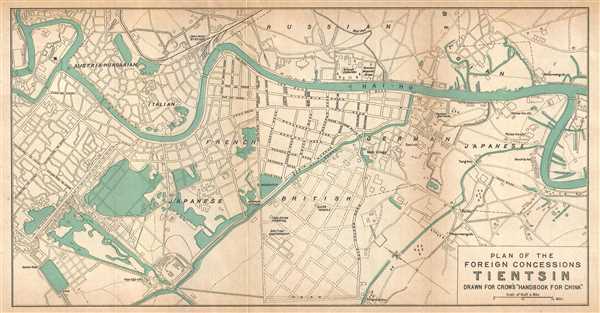 This is a 1921 Carl Crow city map or plan of the foreign concessions in Tianjin (Tientsin), China. The map, which is bisected by the Hai River, depicts the sector of the city in which the international concessions were located, from the Austria-Hungarian concession to the Japanese and Belgian concessions. Some of the streets are labeled, mostly in the British Concession, as well as locations around the map, including the German barracks, the Russian consulate, and the railway station. The Austria-Hungarian, Japanese, French, Italian, Russian, German, British, and Belgian concessions are labeled. The concessions cover 5 miles and are all located along the river. Tianjin's location at the intersection of the Grand Canal and the Hai, formerly Peiho River, connecting Beijing and the Bohai Bay, made Tianjin one of the most important ports in China. Before the 19th century, the Chinese restricted European trade because of fears that such activity would upset order in the empire. After a series of defeats, the ruling dynasty was forced to allow foreign trade and even cessions of Chinese sovereignty. The first concessions in Tianjin were granted to the British and the French and the others followed between 1895 and 1900. All of the concessions were returned to China by 1947.