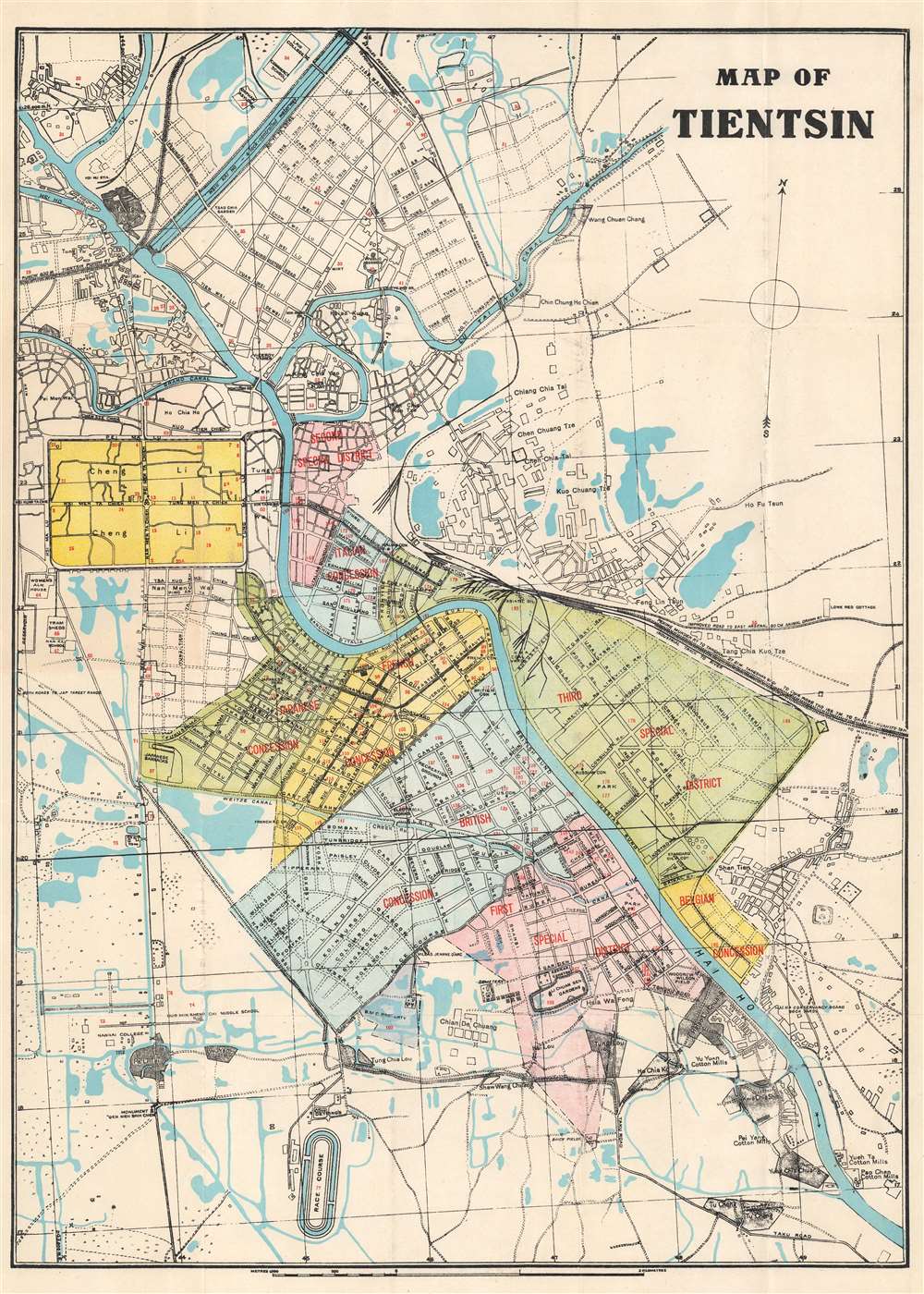 This is a 1928 Peiyang Press city plan or map of Tientsin (天津市,Tianjin), China, shortly after the outbreak of the Chinese Civil War (1927 - 1849). Red overprinting identifies the British, French, Italian, Japanese, and Belgian concessions, along with the First, Second, and Third Special Districts. The same red overprinting marks 185 locations corresponding to an index. The Russian Consulate, French Consulate, British Consulate, Italian Consulate, Japanese Consulate, and U.S. Consulate are labeled within the Concessions and Special Areas. Other identified sites include Standard Oil's installation along the Hai Ho River, the Japanese Barracks, several gardens and parks, and Woodrow Wilson Field.

Tianjin is a Chinese city strategically located at the intersection of the Grand Canal and the Peiho River - thus connecting Beijing to the Bohai Bay. Following the Second Opium War (1856 - 1860), the Treaty of Tientsin opened the city to Foreign Trade and the establishment of extraterritorial concessions. The British and French Tianjin Concessions opened in 1860. Between 1895 and 1900, Japan, Germany, Russia, Austria-Hungary, Italy, and Belgium - countries without concessions elsewhere in China - opened their own concessions. Foreign trade and investment led to Tianjin growing rapidly into one of China's most advanced and wealthiest cities.

In the first half of the 20th century, due to Tianjin's special status as a Treaty Port, it avoided much of the violence associated with the Chinese Civil War (1927 - 1849) and various 'incidents' with Japan. The tenuous immunity began to fall apart on July 30, 1938, when Tianjin fell to Japan during Second Sino-Japanese War (1937 - 1945) and World War II (1939 - 1945). Even then, the Japanese largely respected the Concessions, who were not initially occupied. Finally, in 1941, as tensions with the west escalated, Imperial Japan occupied the American and British concessions.

This map was created and published by Peiyang Press in 1928. We have been unable to locate any other cataloged examples of this edition, but a second edition was issued in 1941.

The Peiyang Press (fl. c. 1928 – 1949) was a Chinese publisher active in Tianjin and Beijing before and during World War II. The press focused on books and maps for the western traveler in China, including works in English, German, and Dutch. It is likely that the press was owned and operated by ex-pat westerners, although we have no evidence to support this theory. Among these publications were British authors Alice Leighton Cleather and Basil Crump’s English-language book Buddhism: The Science of Life (2nd ed., 1928), Robert M. Duncan’s Peiping Municipality and the Diplomatic Quarter (1933), a Chinese-Dutch dictionary (1935) and a 1937 album of black and white photographs of British military exercises in China. They also issued a detailed city plan, Map of Tientsin, with editions published in at least 1928 and 1941. They are known to have published at least two influential pictorial maps in English during the 1930s, Frank Dorn's iconic A Map and History of Peiping and John Kirk Sewall's A Pictorial Map of Peiping. Learn More...