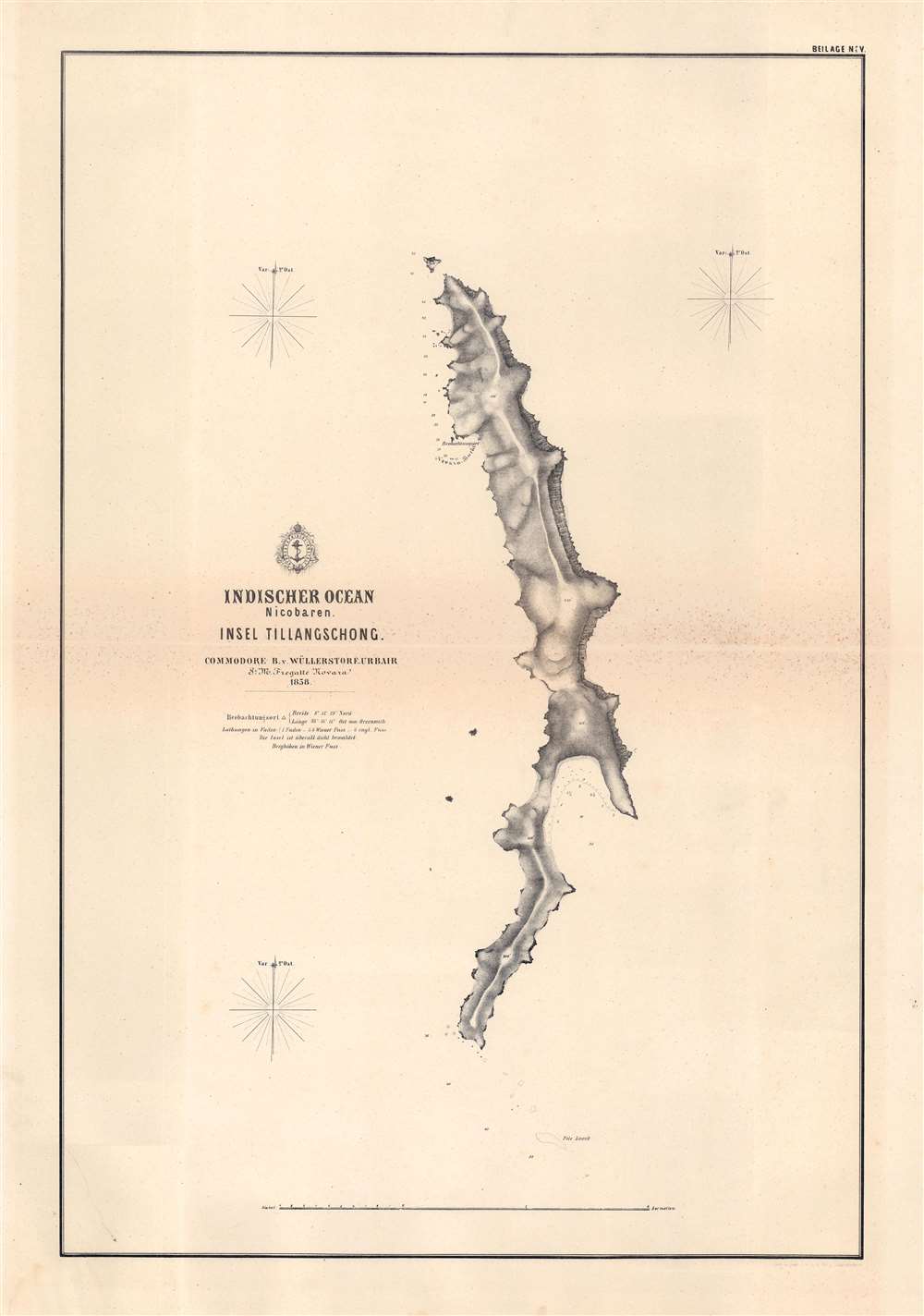 Island in the Nicobars.

This is a rare 1858 Baron Bernhard von Wüllerstorf-Urbair map of Tillangchong Island, one of several maps the Indian Ocean drawn by the 1857 - 1859 Novara Expedition. This map includes a brief legend noting longitude, latitude, units of measurement, and conversion.

The Nicobar Islands and Tillangchong Island

The Nicobar Islands are in the eastern Indian Ocean, close to the island of Sumatra and just south of the Andaman Islands. They were included in the Mao Kun map of the Zheng He Voyages (鄭和航海圖) of the early 17th century. Various colonial powers attempted to claim to the islands, including Austria in the 1770s - 1780s, and, most successfully, the Danish, who saw the islands as an extension of their trading colony at Tranquebar on the Indian subcontinent. As a result, the Danes completed the most extensive mapping of the islands prior to the Novara. Unlike many of the other Nicobars, Tillangchong was historically uninhabited and considered sacred to the native Nicobarese, who travelled there onlly to pray.

Aside from von Wüllerstorf-Urbair's own account of the voyage, mentioned below, a report stretching to 21 volumes on various aspects of the journey (zoology, anthropology, geology and paleontology, linguistics, etc.) was presented to the Viennese Academy of Sciences and published for the public. An abridged three volume account was also published by Dr. Karl von Scherzer in English and German. The long-term impact of the voyage was considerable, especially in the sciences. Among other results, Scherzer brought back to Austria an extensive collection of coca leaves that he gave to a graduate student, Albert Niemann, who was the first to isolate cocaine. In 2004, the Novara was featured on the 20 Euro coin.

This map was printed by the K.K. Hof- und Staatsdruckerei (the Imperial Royal State Printing Office) and is attributed to Baron Bernhard von Wüllerstorf-Urbair. It also carries the seal of the Hydrographische Anstalt (Hydrographic Institute) in Vienna. Although it is dated as 1858 and cataloged as such, it likely was printed after the voyage's completion and is cataloged as anywhere between 1857 and 1865 by different institutions. It is held by several libraries and universities in Europe but is scarce to the market.

Very good. Some discoloration along fold line and bottom margin.