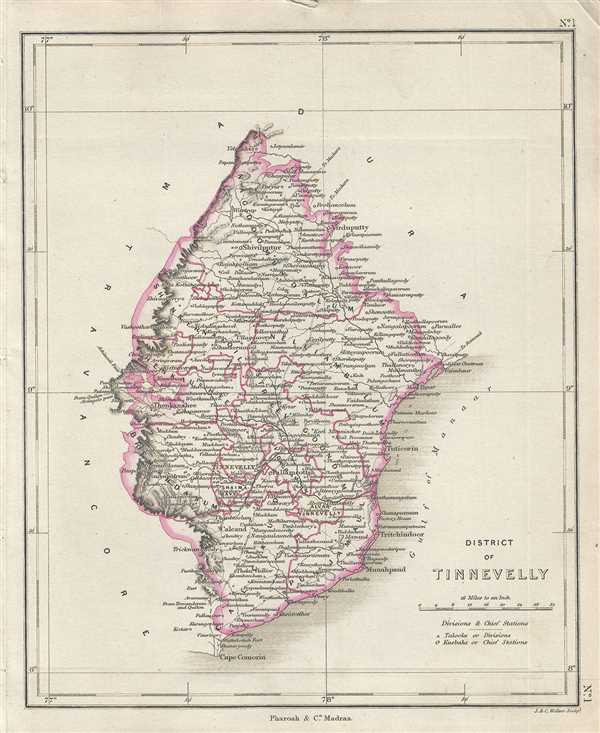 Map of the southern part of Tamil Nadu, India.

This is an interesting 1854 map of the District of Tinnevelly in the modern day state of Tamil Nadu, India, issued by Pharoah and Company. It depicts the district from Cape Comorin (Kanyakumari) north to Paryur (Peraiyur) near Madurai. Important towns and cities are identified, including Tinnevelly (Tirunelveli), Tuticorin (Thoothukudi), Pulicat Lake south to Marcanum (Marakkannam) near Pondicheri (Puducherry). Includes Madras (Chennai), Shivilputus (Srivilliputhur), etc. The map also notes important roads, lakes, rivers and topography.

Tinnevelly District, as it was called under British rule, was originally formed by the British East India Company in 1790 and included the modern Tirunelveli and Thoothukudi as well as parts of he Virudhunagar and Ramanathapuram districts. After India gained independence in 1947, it was divided and the name changed to Tirunelveli. Today the region is home to the Koonthankulam bird sanctuary and the Kalakkad Mundanthurai Tiger Reserve. This map was engraved by J. and C. Walker and issued as plate no. 1 by Pharoah and Company in their 1854 Atlas of Southern India.