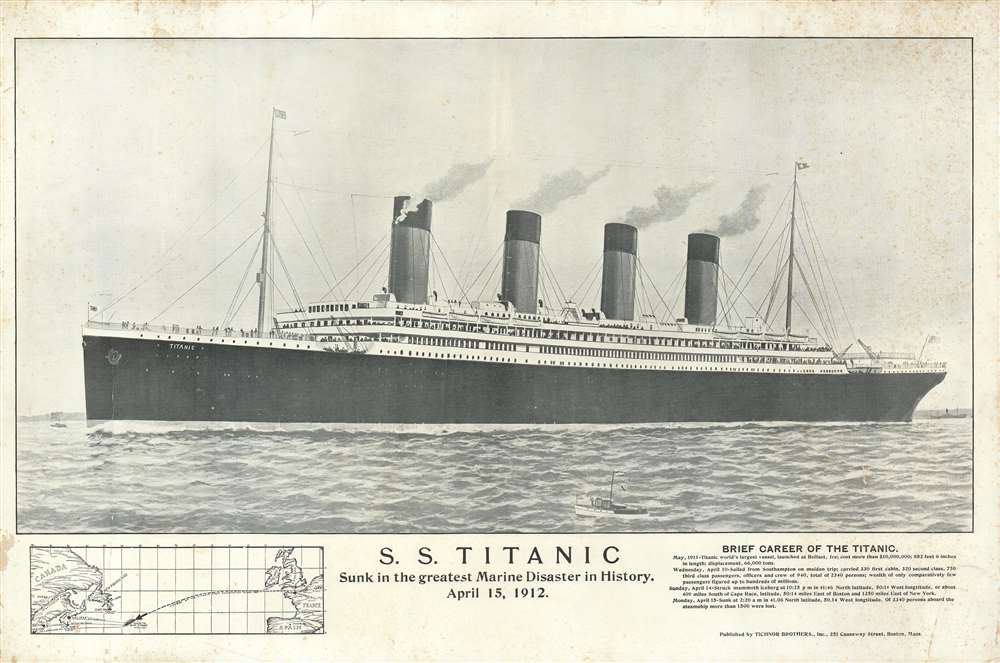 A broadside memorializing the Titantic disaster and those that lost their lives.

This is a 1912 Tichnor Brothers view of the S.S. Titanic memorializing her tragic sinking and the more than 1500 lives that were lost. The view illustrates the entirety of Titanic as she steams out of harbor. People are illustrated on each of her decks as are the woefully inadequate number of lifeboats. When she left Southampton, Titanic was the largest and most luxurious steamship in the world. She was equipped with myriad modern furnishings, including state-of-the-art incandescent lightbulbs, shipboard telephones, and a wireless transmitter. A brief summary of the Titanic's ill-fated voyage appears below the view of the magnificent steamship and chronicles the events of May 13-15, 1912. A map, situated on the lower left, traces the Titanic's route across the Atlantic and marks the approximate location where she hit the infamous iceberg that sealed her demise.

This view was published by Tichnor Brothers in 1912.

Tichnor Brothers, Inc. (1908 - 1987) was an American lithography and publishing firm based in Boston. Renowned for their picture postcards, Tichnor Brothers published a wide variety of postcard types. In 1987 the company was sold to Paper Majic.

Very good. Light foxing. A couple of creases. Printed on thick paper.
Looking for a high-resolution scan of this?