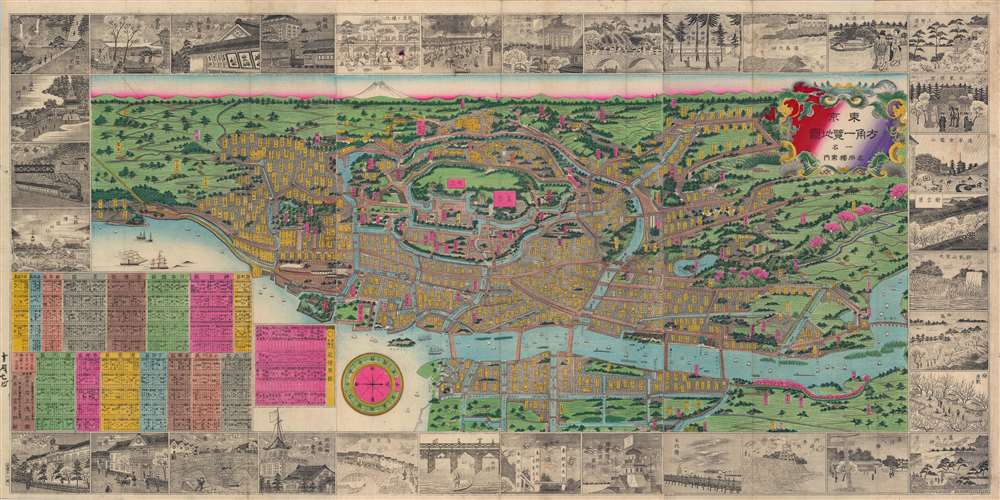 This is a rare and visually stunning 1880 Meiji 13 Inoue Mohei (井上茂兵衛) bird's-eye view and map of Tokyo, Japan, featuring illustrations of famous sites (bridges, temples, parks, government offices). It is oriented to the west, with Mt. Fuji in the distance and the Imperial Palace (皇居) roughly at center.

The multicolored boxes at left list different wards (區) and districts (丁目 or just 丁 in shorthand) of Tokyo, shown in their appropriate location with yellow (or occasionally white or light blue) background boxes. The pink (or sometimes orange or red) background boxes indicate government offices, imperial palaces and property, schools, Buddhist temples, and Shinto shrines. The largest box at right (近傍里程), next to the compass, shows the approximate distance from Nihonbashi, the bustling heart of Edo that was (and still is) considered the center of Tokyo, to various sites throughout the city, measured in ri (里) or chō (丁, here meaning streets or city blocks). The compass itself combines the four cardinal directions with the traditional East Asian system of directions on a compass, using the Earthly Branches (地支) and Heavenly Stems (天干) to denote degrees in intervals of 15 or 30 (as here) degrees. This map is an incredible document showing the combination of Japanese culture (dress, religion, customs) with new influences from abroad, as well as the transformation of Tokyo beyond its Tokugawa-era base (when it was known as Edo).

With the Meiji Restoration in 1868, the Tokugawa were displaced from Edo and the Emperor Meiji moved the imperial capital from Kyoto to Edo (renamed Tokyo, 'eastern capital'). The Meiji Era was a period of tremendous change in Japan, particularly in cities, and in Tokyo more than any other. New ideas, technologies, and fashions from abroad were sought out and adopted with incredible rapidity, and in the process were localized to suit Japanese tastes. Building on the foundations of Tokugawa Edo, Tokyo expanded quickly and, in the process, intermingled traditional architecture with styles reminiscent of Victorian London. The illustration in the bottom-left shows one example: the National Printing Bureau (印刷局), which initially printed banknotes but later took on a variety of functions (an institution with which the producers of this map would be well-familiar). Many of the old canals of Edo, which would be filled in or paved over in the following decades, remain intact, as do the Edo-era bridges that were replaced over the Meiji period.

Ueno Park had recently opened as one of Japan's first public parks, but a number of additions and modifications in the following decades would change it substantially (the illustration in the top-right corner shows the Kiyomizu Buddhist Temple in the park 上野清水觀音堂). Shimbashi Station (新橋駅), Tokyo's first train station, prominent at left-center, was replaced by Tokyo Station (at its current location in front of the Imperial Palace) in 1914, and, like much of the city, was destroyed in the 1923 Great Kanto Earthquake. An illustration at top center-left (新橋銕道) shows a train pulling in to the station, while another at left-center shows a train going under the bridge at Takanawa (高輪), near Kitashinagawa (北品川). In the illustrations that surround the map, many of the people are wearing traditional Japanese clothing, but a number have adopted European Victorian clothing, a trend that would increase in the following years.

This map was produced by Inoue Mohei (井上茂兵衛 ) in conjunction with Miyake Hanshirō (三宅半四郎), a nishiki-e artist), on October 7, 1880, and was published the same month (no exact day given). We note examples at the National Diet Library, the National Museum of Japanese History, the Geospatial Information Authority of Japan, and a few other institutions in Japan. Outside of Japan, it is held only by UC-Berkeley in its 1882 edition.

Inoue Mohei (井上茂兵衛; fl. c. 1876 - 1900) was a Japanese cartographer and publisher active in the mid-late Meiji period. At the end of the nineteenth century, he served as the head of the Tokyo Jihon Engraving Sales Association (東京地本彫画営業組合), a descendent of the publishers' guilds (地本問屋) that produced ukiyo-e, popular literature, and other essential cultural production of the Tokugawa era. Inoue generally produced nishiki-e (錦絵), an elaborated form of ukiyo-e that were very popular during the Meiji period and which often depicted the introduction or influence of foreign technology, fashion, and ideas in Japan. Learn More...