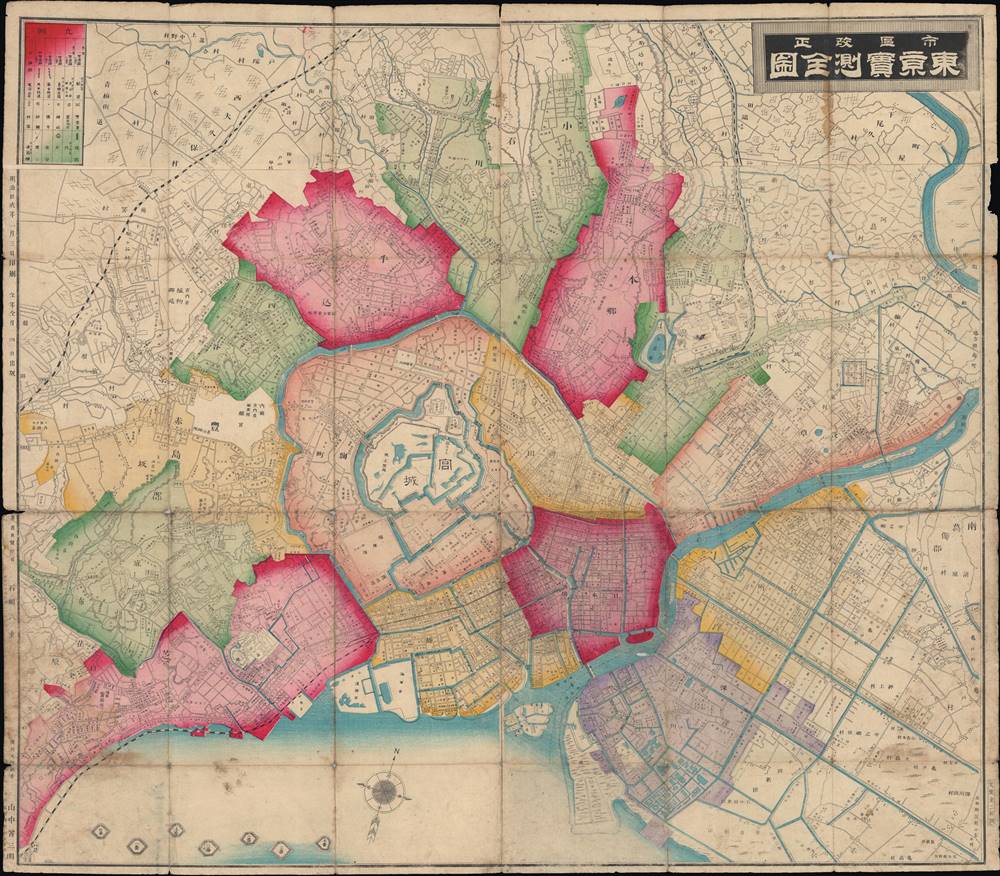 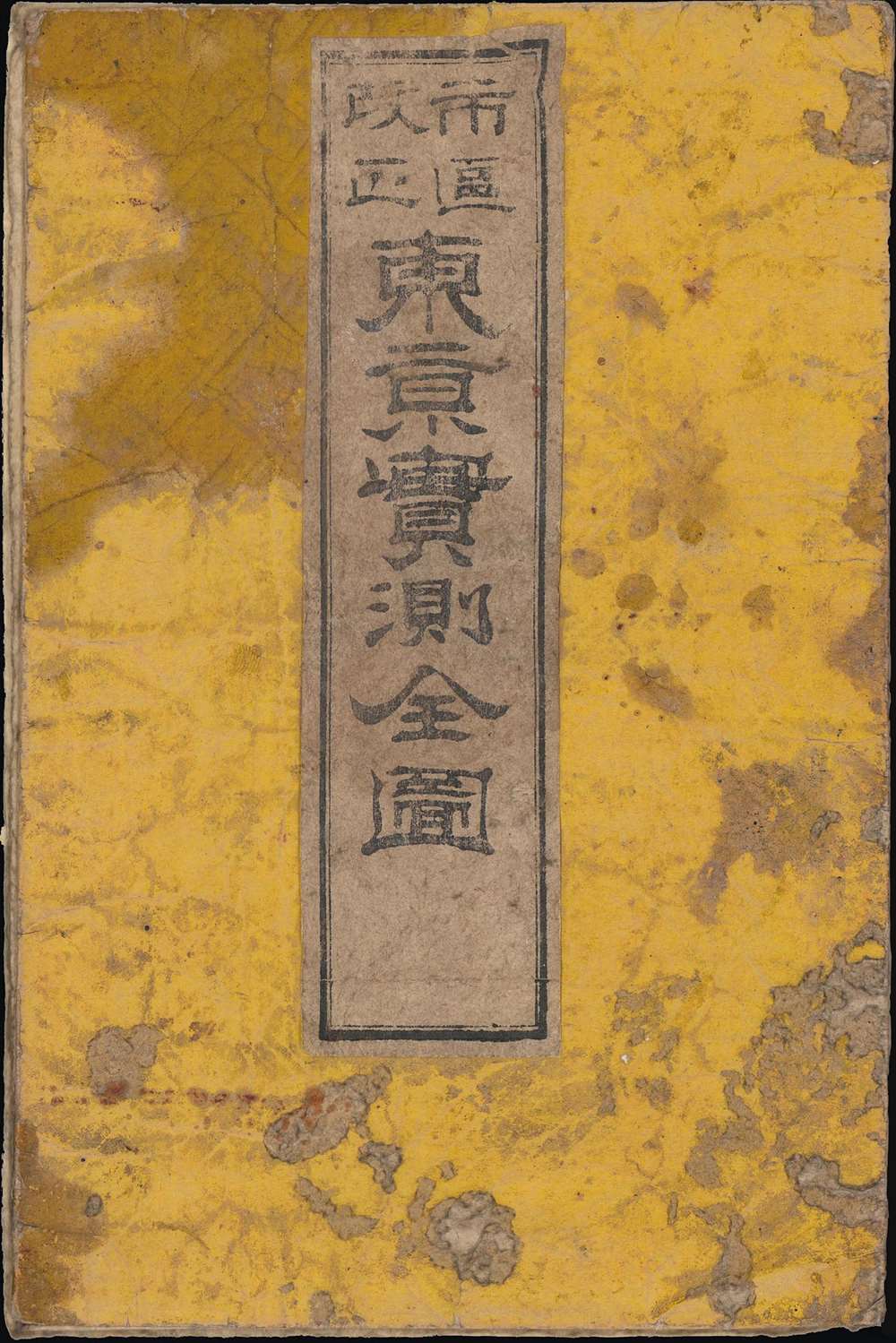 This is an 1889 folding survey map of Tokyo, Japan by Ishijima Yae and Yamanaka Yoshisaburō. Its primary purpose is to highlight recent administrative changes in Tokyo, namely the creation of Tokyo Municipality (東京市), composed of 15 wards (區), within the larger Tokyo Prefecture (東京府). This map likely would have been used in a government office for reference purposes; the outside cover appears to include a list of names which might indicate its provenance, but the surname characters (at top) are unintelligible.

This map is oriented roughly towards the north with the imperial palace at center. The newly arranged wards of Tokyo are color-coded, with exceptions (uncolored areas) for lands used by the military and larger possessions of the imperial family, some of which had recently been turned into public parks.

The legend at top-left includes symbols and designations for parks, roads (divided into four levels depending on width), telegraph offices, train lines, vegetable and fish markets, wharves, villages and cultivated areas, Buddhist temples and Shinto shrines, Kenpeitai and police stations, dikes, rivers, hills, and fenced areas, noting which of these have been recently updated with the administrative reform.

One atypical feature of this map is the inclusion of seven islands (一番, 二番, and so on) in Tokyo Bay, as well as the larger island of Ishikawajima (石川島) to their northeast. These were artificial islands built through land reclamation at the end of the Edo period (Bakumatsu). Following their unpleasant experience with Commodore Perry's 'black ships' in 1853 – 1854, the Tokugawa Shogunate rapidly tried to adapt to the reality of foreign military threats. The seven islands were meant to house gun batteries (台場), though not all of them were completed, while Ishikawajima became a shipyard. In 1928, the islands were turned into public parks, and in the 1990s were connected to each other with more reclaimed land to form the large island of Odaiba (お台場).

Tokyo and several other Japanese cities went through a dizzying period of administrative reforms during the Meiji era, due to the pace of their growth as well as changing bureaucratic practices and conceptions of governance. Initially, elements of the Tokugawa system of wards were maintained to appease elites who feared more rapid reforms. Then, in 1871 – 1872, Tokyo Prefecture was expanded and a system of 'large and small wards' (大區小區制) was put into place.

Further adjustments were made in the following years and a wholesale reorganization was launched in 1888 – 1889 where the central government tried to administer Tokyo, Osaka, and Kyoto more directly while also eliminating the lowest level of administration, the neighborhood. The central administration of Tokyo was unpopular and abolished a decade later, but several important changes endured until the World War II era, including the election of a city council and ward assemblies. These changes kept the printers and publishers of Tokyo busy, as each round of administrative reform required updated maps.

With the Meiji Restoration in 1868, the Tokugawa were displaced from Edo and the Emperor Meiji moved the imperial capital from Kyoto to Edo (renamed Tokyo, 'eastern capital'). The Meiji era was a period of tremendous change in Japan, particularly in cities, and in Tokyo more than any other. Most of the daimyo from throughout Japan who had maintained residences in Edo left with their families, significantly reducing the population and wealth of the city. At the same time, new ideas, technologies, and fashions from abroad were sought out and adopted with incredible rapidity, and in the process were localized to suit Japanese tastes.

Building on the foundations of Tokugawa Edo, Meiji-era Tokyo intermingled traditional architecture with styles reminiscent of Victorian London. Even the layout of the city was hybrid; here we can see Nihonbashi (日本橋) and Kyobashi (京橋), historically the most densely populated areas of Edo, as well as recent additions like Shimbashi Station (here marked 停車場), Tokyo's first railway station, and the industrialization of Fukagawa (深川) and Honjo (本所) Wards. Much of Tokyo as it exists here would be destroyed in the 1923 Great Kanto Earthquake and again by American bombs in the closing months of World War II.

Stylistically, this map represents the height of the Meiji-era (1868 - 1912) cartographic tradition - wherein western style cartographic standards, lithographic printing, and imported inks, were combined with Ukiyo-e color traditions and aesthetic values. This map falls in a cartographic lineage that begins with the Meiji Restoration and continued through about 1895. Here, the boldly bright palette likely associates this map with aka-e (赤絵; 'red pictures'), illustrations in vivid color achieved through imported German-made inks. Such maps began to fall out of fashion near the turn of the century, when they were supplanted by more reserved printed color.

This map was printed on January 3, 1889 (Meiji 22) and released the following day; thus, the map was produced after the administrative reforms were promulgated but before they were implemented (on May 1, 1889). It was designed and published by Ishijima Yae (石嵨八重), while Yamanaka Yoshisaburō (山中善三朗) engraved and printed it. It is held by the University of California Berkeley, the National Diet Library, and the National Institutes for the Humanities in Japan. In is very scarce to the market. Due to the urban growth and administrative changes in Tokyo in the Meiji era, similarly titled maps exist from the same period (such as 改正東京測量全圖, 明治改正東京全圖, 改正新鐫東亰實測全圖, 東亰實測全圖 市區改正, and 東京市區改正縮圖, all very rare), but they are distinct from Ishijima and Yamanaka's map.

Ishijima Yae (石嵨八重; fl. c. 1884 - 1893), often cataloged as 石島八重 with the more common variant of the second character, was a bookseller and publisher based in Nihonbashi, Tokyo during the Meiji period. Learn More...


Yamanaka Yoshisaburō (山中善三朗; fl. c. 1888 – 1890) was an engraver and printer based in Honjo Ward, Tokyo (a new-defunct administrative district on the east bank of the Sumida River). Learn More...

Good. Wear along fold lines and edges, some loss at fold intersections and on cover.