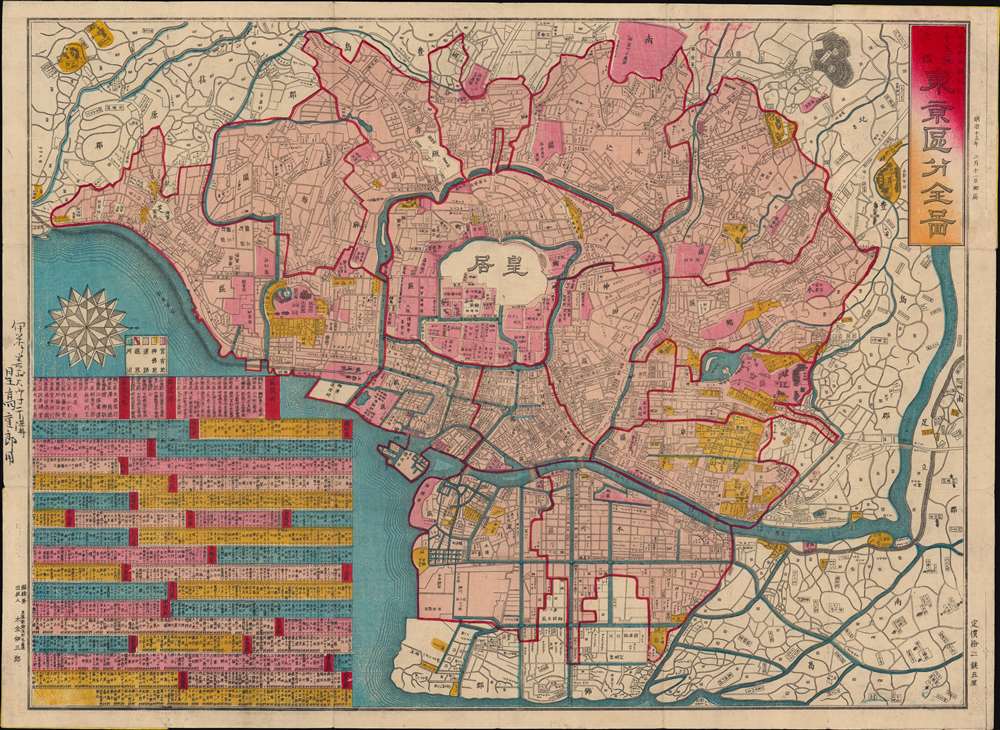 Tokyo at a moment of transformation.

This is a very rare and colorful 1880 (Meiji 13) Kimata Isaburō plan of Tokyo and its surrounding prefectures. The map presents Tokyo in the midst of rapid changes, including to its administrative divisions, which are the focus here.

This map is oriented towards the west with the Imperial Palace at center. A legend next to the compass indicates the color-coding on the map, with government-held land (including property of the imperial household) shaded dark pink, and land belonging to Buddhist temples and Shinto shrines colored yellow. The boxes at bottom-left list the names of the 15 wards and 6 prefectures of Tokyo, the names of the Ward Mayors, the names of individual neighborhoods in each ward, and the neighborhoods and villages of each prefecture. Tokyo went through several rounds of administrative reorganization after becoming both the imperial and political capital in 1868. The most drastic of these in 1888 - 1890 postdate this map and many of the wards (區) shown here ceased to exist. A handwritten note in the left-side margin appears to list the name of the map's original owner (Hoshi Takashigeo 星高重郎).

With the Meiji Restoration in 1868, the Tokugawa were displaced from Edo and Emperor Meiji moved the imperial capital from Kyoto to Edo (renamed Tokyo, 'eastern capital'). The Meiji Era was a period of tremendous change in Japan, particularly in cities, and in Tokyo more than any other. New ideas, technologies, and fashions from abroad were sought out and adopted with incredible rapidity, and in the process were localized to suit Japanese tastes.

Building on the foundations of Tokugawa Edo, Tokyo expanded quickly and, in the process, intermingled traditional architecture with styles reminiscent of Victorian London. In a dramatic example, Ginza was completely rebuilt as a 'brick quarter' after a large fire destroyed much of the district in 1872. In the end, this proved unpopular with locals and was not used as a model for other areas, as had been initially hoped. Nonetheless, the city was remade considerably during the Meiji era, driven by amorphous notions of national prestige and a desire to demonstrate that Japan had a 'modern' capital city as much as by expediency or sound urban planning.

The headiness of the times are reflected in the then-new features on the urban landscape. Ueno Park had recently opened as one of Japan's first public parks, in the area marked as Shitaya Ward (下谷區). Shimbashi Station (鉄道驛), Tokyo's first train station, is at left-center (it was replaced by Tokyo Station at its current location in front of the Imperial Palace in 1914, and, like much of the city, was destroyed in the 1923 Great Kanto Earthquake). The wards across the Sumida from the central area of Tokyo, Fukagawa (深川) and Honjo (本所), developed rapidly and became home to many factories and warehouses during this period.

Stylistically, this map represents an example of the distinctive Meiji-era (1868 - 1912) cartographic tradition - wherein western style cartographic standards, lithographic printing, and imported inks, were combined with Ukiyo-e color traditions and aesthetic values. This map falls in a cartographic lineage that begins with the Meiji Restoration in 1868 and continued through about 1895. The new style was often employed by upstart printers, including Kimata Isaburō, seeking to unseat long-established printing houses. Such maps began to fall out of fashion near the turn of the century, when they were supplanted by more reserved printed color.

This map was published on February 11, 1880 (Meiji 13) by Kimata Isaburō (木全伊三郎), based in Shiba (芝區) Ward, now Minato Ward, Tokyo. Its only known institutional holding is with the National Diet Library and it has no known history on the market.