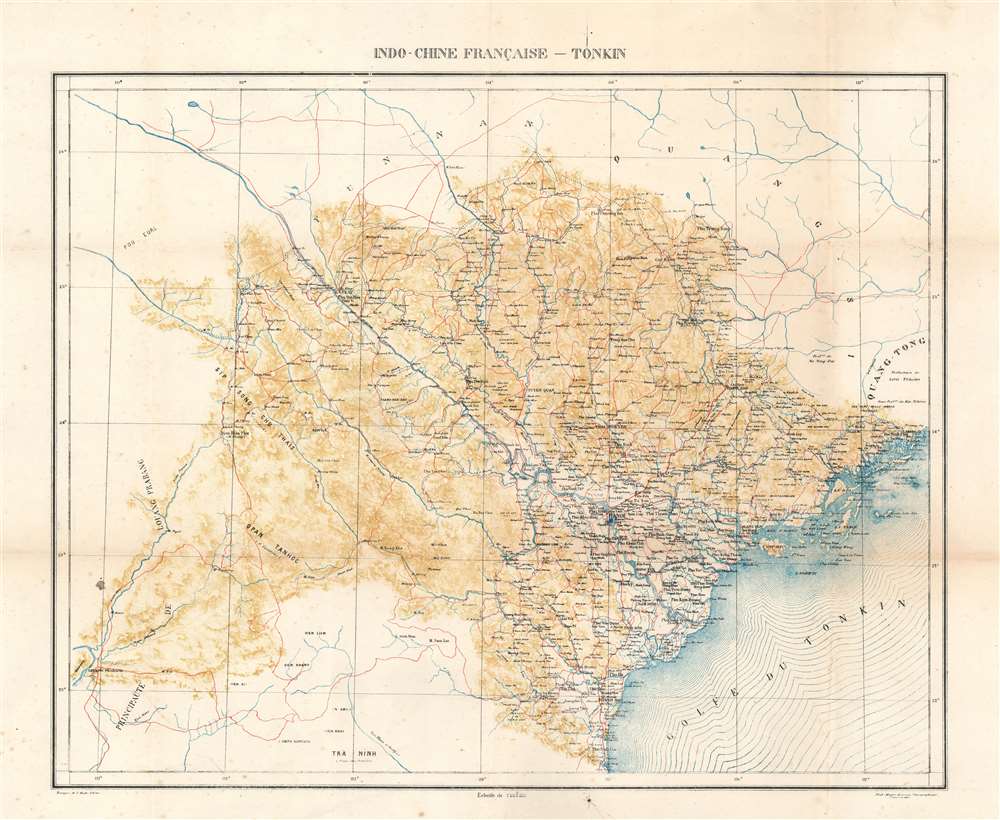 This is an 1889 French Bureau Topographique des Troupes de l'Indo-Chine map of Tonkin, Vietnam, or North Vietnam. Impressive detail is offered throughout. Not only are cities, such as Hanoi and Haiphong, labeled, but towns and villages are identified as well. The river network is illustrated with precision and the road network is highlighted in red. All the detail likely reflects the reality that the French had been fighting an increasingly violent insurgency in Tonkin since 1882. The French then fought a war with China in 1884 - 1885, and the insurgency continued after the war ended, with the support of the Chinese.

Getting the Upper Hand on the Insurgency

In 1889, the French had been waging an ineffective counterinsurgency for the previous three years. It was not until 1891, when Jean-Marie de Lanessan (the newly appointed governor-general of Tonkin) brought new ideas, that the French began to take control. He created structures that allowed military commanders to contain and defeat the insurrection, and appointed officers capable of accomplishing their assigned goals. Two of these men, Joseph Gallieni and Hubert Lyautey, would distinguish themselves in World War I and retire as Marshals of France. Then the French embarked on a policy of winning the Vietnamese hearts by proving to them that French occupation was preferable to anarchy. Gradually, the Vietnamese peasants turned their backs on the insurgents, and, without the support of the population, the insurgency slowly dissolved.

This map was created and published by the Bureau Topographique des Troupes de l'Indo-Chine in 1889. This map is uncatalogued in OCLC and we have been unable to trace any other examples.

Good. Exhibits wear and toning along original fold lines. Closed vertical tears along original a fold line professionally repaired on verso. Verso repairs to fold separations. Blank on verso.
Looking for a high-resolution scan of this?