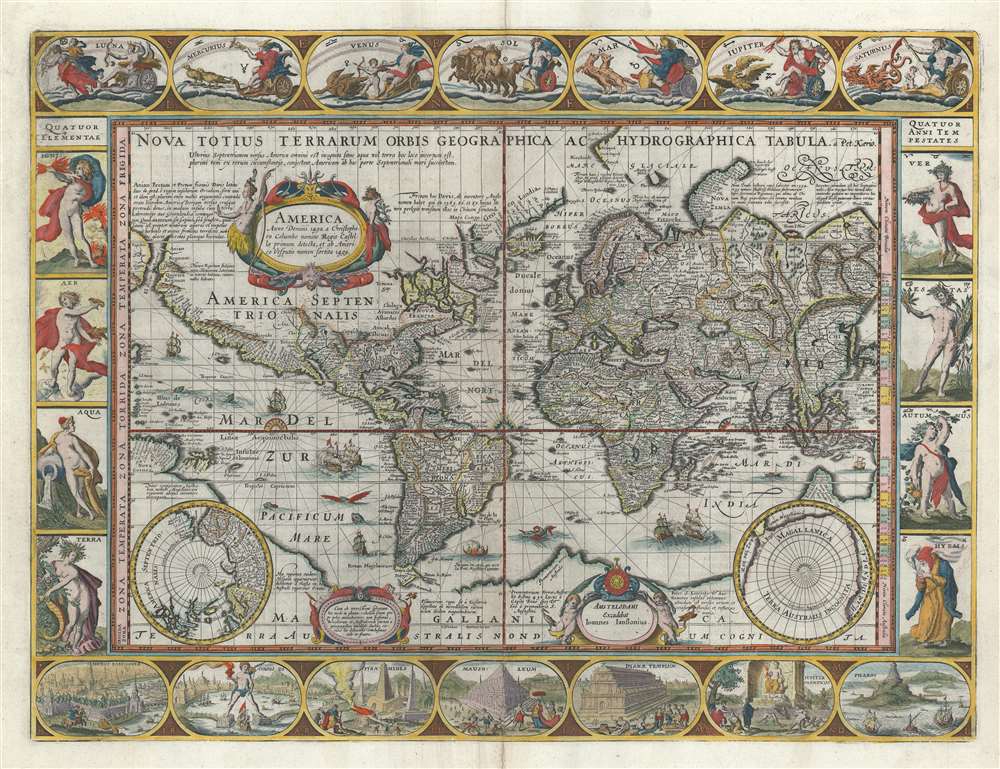 Classic single-sheet world map on Mercator's projection... celebrated as one of the supreme examples of the map maker's art. - Shirley

A striking example of Dutch Golden Age cartography, this is Pieter van de Keere's 1628 map of the World of a Mercator Projection surrounded by allegorical carte-a-figure imagery. The cartography embraces many of the common misconceptions of the period, including general confusion regarding the cartography of North America, the polar regions, the interior of Africa, and East Asia.

The map exhibits the apocryphal southern continent of Terra Australis, presumed to exist based upon ancient Aristotelian philosophical speculation regarding geographical balances. It illustrates Korea as an Island. The strait of Anian is identified between Asia and America, with a large adjacent textual annotation questioning whether or not America is connected to Asia. In Africa, Keere follows Ptolemaic speculation regarding the sources of the Nile, mapping two speculative lakes in southern Africa. Both Lake Parima (Manoa) and Laguna de Xarayes (Lacus Eupana), fictional locations of El Dorado, appear in South America. In North America, the cartographer maps the supposed Seven Cities of gold, noted here as 'Ceptum Citta' - a legend dating to the saga of Álvar Núñez Cabeza de Vaca, the discoveries of the conquistador or Francisco Vázquez de Coronado, and ancient Portuguese legends relating to the Mooring invasion.

Despite a plethora of geographical confusions, the map genuinely attempts to embrace the most up to date cartographic information. The Straits of La Maire, discovered by Jacob Le Maire and Willem Schouten in 1616, appear just to the east of Tierra del Fuego - which is now correctly an island. The discoveries of Martin Frobisher and John Davis's in search of the Northwest Passage in 1576-1587 appear in the Canadian Arctic. There is as yet no trace of the Great Lakes or Hudson Bay. The seas around Nova Zembla, in the Russian Arctic are maps according to the discoveries of Willem Barentz made between 1594 and 1597. A large promontory south of Java identified as 'Beach' bears a striking resemblance to northern Australia's Arnhem Land and the Gulf of Carpentaria, despite the fact that Austria had not yet been discovered. 'Beach' itself is a reference to Marco Polo.

The map is surrounded by stunning allegorical imagery exhibiting fine engraving and well-balanced design. Along the top are images of seven Greek gods associated with the known planets and days of the week. Along the left, are the four allegorically represented primary elements: Fire (Ignis), Air (Aer), Water (Aqua) and Earth (terra). To the right are allegorical representations of the four seasons: Spring (Ver), Summer (Aestas), Fall (Autumnus), and Windter (Hyems). Along the bottom are illustrations of the seven wonders of the ancient world, the Murus Babyloniae (The Hanging Gardens of Babylon, Nineveh, Iraq), Colossus (Colossus of Rhodes, Greece), Pyramides (the Great Pyramids of Gizeh, Egypt), Mausoleum (Mausoleum of Halicarnassus, Bodrum, Turkey), Dianae Templum (Temple of Diana, or Athena, Izmir, Turkey), Jupiter Olympicus (State Statue of Jupiter, or Zeus, Olympia, Greece), and Pharos (The Great Lighthouse of Alexandria, Egypt).

Pieter van den Keere cartographically derived this map from Willem Blaeu's map of 1606, itself derivative of Petrus Plancius's wall map of 1592. Keere first issued this map on a completely separately plate, finely engraved with updated content and embellishments, in 1608. Keere intended to issue his own multi-volume atlas, but ultimately ran out of funds before the project could be completed. He sold his completed map plates, including the plates for the present map updated in 1621 to reflect Le Maire's Strait to the east of Tierra del Fuego, to Jan Jansson. Janson replaced Keere's signature with his own in the bottom right cartouche, but retained Keere's author imprint in the upper right after the title. Jansson issued editions in 1621, and as here, in 1628, lacking a date. All editions are rare to the market.

Pieter van den Keere (1571 - c. 1646) was a Dutch engraver and cartographer active in London and Amsterdam in the late 16th and early 17th centuries. Keere, who is alternatively known as Kaerius or Coerius, was born in Gent, the son of printer and type founder Hendric van den Keere. Religious persecution in the Low Countries forced Keere, with many others, to take refuge in London, where they established themselves. There Keere married the sister of Jodocus Hondius, also a refugee in London, and it was most likely through Jodocus that he mastered engraving and mapmaking. Keere is responsible for numerous maps, most of which are associated with the Hondius firm. Some of his most notable works include numerous county maps of the British Isles that were later compiled into Camden's Britannia. Keere also engraved many of the maps included in the Jansson Atlas Minor. Learn More...