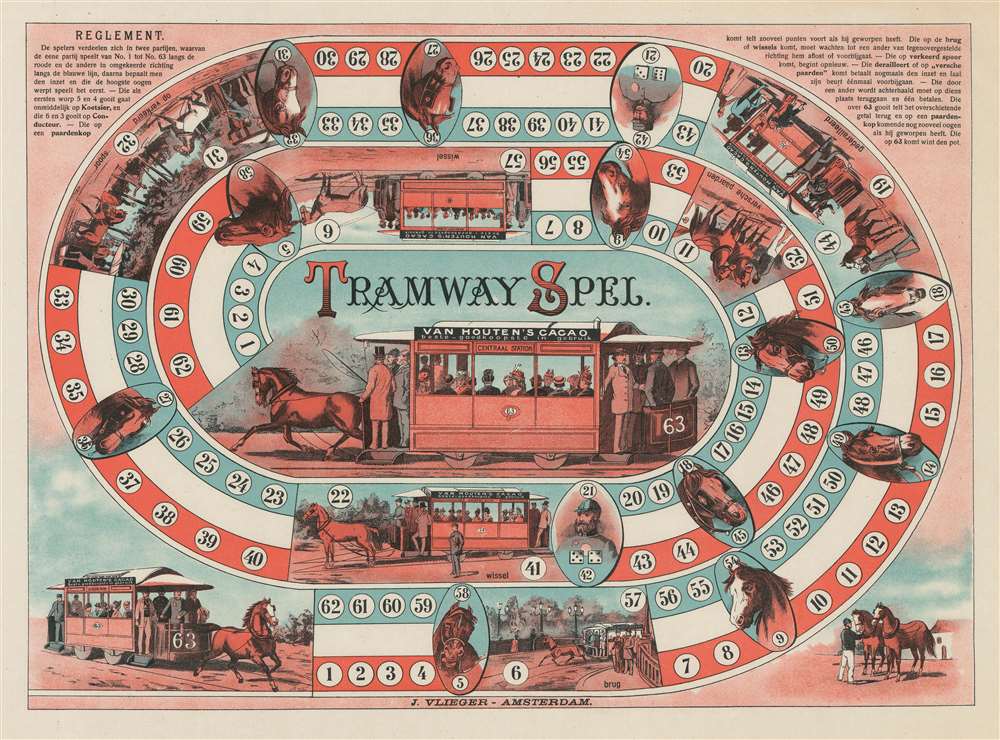 A Dutch game board highlighting horse-drawn trolleys around Amsterdam.
$350.00

This is a c. 1885 J. Vlieger chromolithograph game board map of horse-drawn trolleys in Amsterdam. Two circuits, blue and red, snake around the board with sixty-three numbered circles inscribed within. Portraits of horses and views of stops along the route populate the board. The trolleys in the views display different station stops, but all advertise Van Houten’s Cacao, a Dutch hot chocolate company founded in 1815 and still operational. Players advance along the board by rolling dice and moving in opposite directions. The winner is the first to reach the end.

The first horse-drawn tramway line in Amsterdam began operation in 1875. The stops illustrated on this game, among them Leidseplein, represent actual tram stops on the Leidseplein-Overtoom route. Between 1900 and 1906, most of the horse-drawn trams were replaced with electric trams, making this board game not only a novel twist on a classic game but also an interesting look into the early days of public transportation in the Amsterdam.

This game was produced and published by J. Vlieger c. 1885, probably on behalf of or with advertising support from Van Houten's Cacao. The OCLC catalogues examples as being part of the institutional collections at the Library of Congress and at Northwestern University and we are also aware of an example in the collection at the Rijksmuseum in Amsterdam.

Jan Vlieger (1869 - 2010) was a bookshop, art supply store, and printer that operated in Amsterdam during the 19th, 20th, and 21st centuries. Founded by Herman Koster in a shop in the Halvemaansteeg, Jan Vlieger managed the shop for Koster. After Koster left Amsterdam in 1869, Vlieger took over the business, and he and his family moved into the building in the Halvemaansteeg. Jan married Anna Elisabeth Kötter on October 18, 1866, with whom he had several children, some of whom would take over his business later. Vlieger entered the book and paper trade in 1870, after acquiring a bookshop and publishing house from a Mr. Schadd after he became involved in the newly operational Amsterdam Omnibus Company. Over the years that followed, Vlieger used his success to continually grow his business and bought real estate all over Amsterdam, opening new branches when he could. Jan's eldest son Frits began working for the firm in 1887 and another son, Abel, joined the company in 1890 at the age of thirteen. By 1904 all three sons were working for J. Vlieger. Jan Vlieger died on January 14, 1908 and his sons inherited the businesses. His daughters received the country home in Bussum and other real estate. This, unfortunately, causes friction within the family because the sons rented the properties where the businesses operated from the daughters. Crisis hit in 1938, just as it did almost everywhere worldwide. Properties were sold to and rented from the city, although the Vliegers had difficulty paying the rent. Fortunately, and surprisingly, World War II arrived in Amsterdam in May 1940 and saved the businesses. Blackout paper and tape were in high demand, and the scarcity caused by the war helped prop up sales. However, Abel, one of the sons, was arrested twice by the Sicherheitsdienst for 'an overly patriotic attitude' and sent to a disciplinary camp in Germany, where he died in 1944. Gerrit J. Vlieger, a nephew of the sons, began working for the firm in 1938 and took over the business from Frits on September 15, 1950. Gerrit continued to run the business through most of the latter 20th century, continually dealing with forced cutbacks and closures due to continual losses in sales. After Gerrit passes away in 1989, the company was sold and today the only vestige of this mainstay of Amsterdam for well over a century is a paper shop at Amstel 34. Learn More...