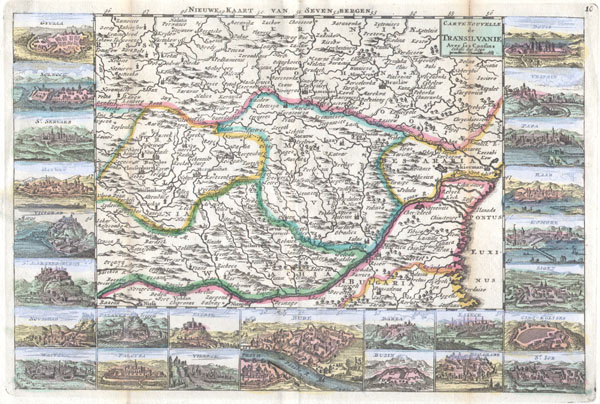 A very scarce, c. 1710, map of Transylvania and Moldova by Daniel de la Feuille. Depicts the region of eastern Europe just west of the Black Sea, south of the Ukraine, and north of Bulgaria. Features inset views of 25 important regional trading centers: Gyulla, Solnoce, St. Servaes, Hatwan, Vicigrad, St. Martins Bergh, Novigrad, Waitzon, Planka Trigell, Palotta, Nitrie, Villeck, Bude, Darda, Buzin, Esseck, Belgrade, St. Iob, Cinq-Eglises, Signet, Romore,Raab, Papa, Vesprin and Dotis. Also indicates the course of the Danube River from the black sea as far west as Razena. An alternate titlein Dutch is printed above the top border of the map, 'Nieuwe Kaart van Seven Bergen.' Long after this map was published, in 1888, Emily Gerard published The Land Beyond the Forest, an account of Transylvanian folklore that included legends about Vampires. Nine years later Bram Stoker popularized the notion and brought fame (infamy?) to Transylvania in his classic novel of gothic horror, Dracula. This map was originally prepared for inclusion as chart no. 10 in the 1702 edition of De la Feuille's Atlas Portatif. This map is from the Dutch 1710 edition.