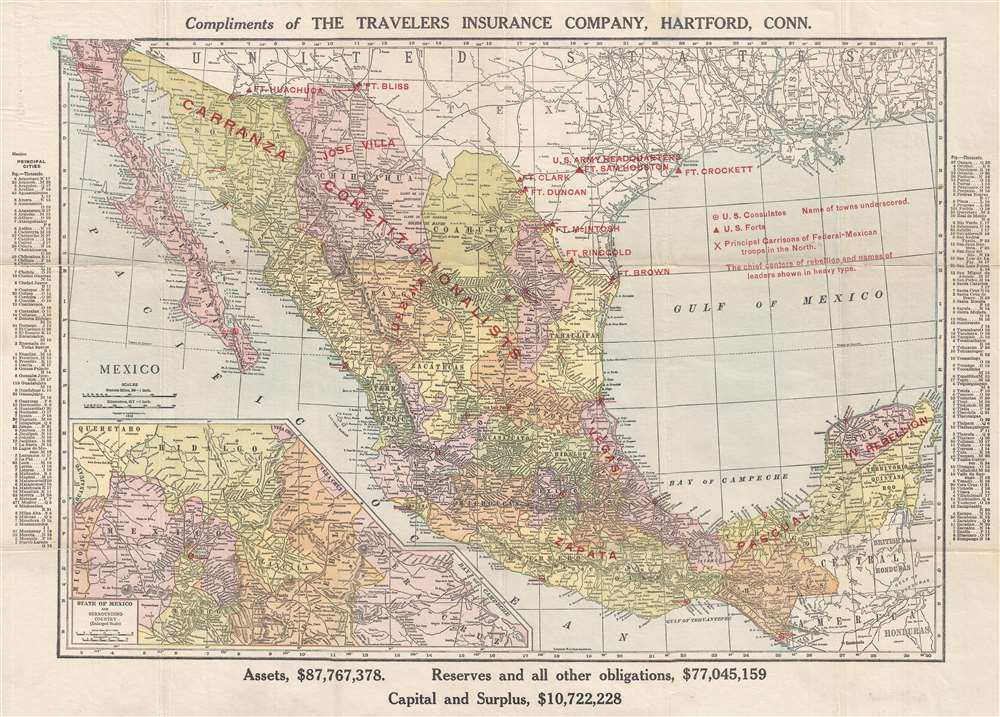 Broadside map of the Mexican Revolution issued to assure Travelers Insurance customers that their assets in Mexico were protected.

This is a 1913 Travelers Insurance Company and Rand McNally map of Mexico during the Mexican Revolution (1910 – 1920). The map, intended for American customers of Travelers, was meant to assure investors that their insured assets in Revolutionary Mexico were protected. Coverage extends from the Pacific Ocean to the Atlantic Ocean and from the southern United States to Guatemala, Honduras, and the Gulf of Tehuantepec. Created for the Travelers Insurance Company, the situation in Mexico is presented by using red overprinting identifying which factions controlled various parts of Mexico. Areas controlled by Venustiano Carranza, Jose 'Poncho' Villa, and Emiliano Zapata, all important figures in the Mexican revolution, are labeled, as are all the garrisons of Mexican federal troops. U.S. forts along the U.S.-Mexico border are also highlighted using the red overprinting, reinforcing the notion that the United States was protected against the chaos to its south. As this is a Rand McNally map, myriad cities, towns, and villages are labeled and the principle cities are underscored in red. An inset map of Mexico City and its environs is situated in the lower left corner.

Foreign investment in Mexico had flourished during The Porfiriato, a period of Mexican history from 1876 – 1911 dominated by General Porfirio Díaz. While he was in power, Díaz believed that it was necessary to suppress any opposition and maintain order to reassure foreign entrepreneurs that investing in Mexico was safe. The Mexican revolution ignited because it was unclear who would succeed Díaz. By the summer of 1913, Francisco Madero had been elected president, but he had abandoned most of the popular rhetoric that had gotten him elected. Instead of nurturing the support of fellow revolutionaries, with whom he had ousted Porfirio Díaz, Madero was bound by the Treaty of Ciudad Juarez, which guaranteed that the essential structure of the Díaz regime remained in place. This meant that, instead of employing the revolutionary armies, they were sent home and Madero utilized the Federal Army to try and keep the peace. This, and his choice not to maintain important policies concerning land reform, led to the resumption of insurrections led by Zapata and Pascual Orozco. This map reflects this situation: a new president, Madero, finding himself on the opposite side of the revolutionaries. Madero resigned late in 1913, but was murdered, along with his vice president, on their way to prison.

This map was originally designed and printed by Rand McNally and then repurposed by the Travelers Insurance Company as a broadside advertisement concerning the Mexican Revolution in 1913.