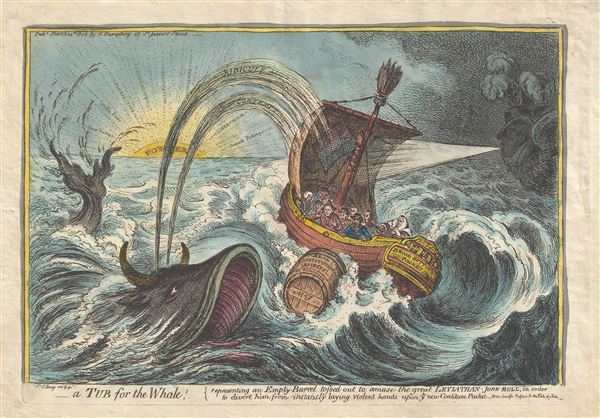 This is a scarce 1806 hand color aquatint and etching of a Tub for the Whale, by James Gillray. The lengthy title references the preface of Jonathan Swift's satire A Tale of a Tub, published in 1704.

In the etching, we see a whale with horns – John Bull (based on the personification of England) with a gaping mouth, spouting 'Ridicule' and 'Contempt' towards a packet-boat steered by the new Ministry. The boat apparently includes Erskine, Sheridan, Petty, Grenville, Windham, Spencer, Fox, Grey and Lord Ellenborogh at the tiller. On the far right, a winged cherub, the Prince of Wales, surrounded by heavy clouds blows wind into the sail. The boat, in danger from the churning waters from the whale's tail, has a broken mast with a broom which signifies that the boat was to be disposed of. The crew has just thrown out a barrel with the inscription 'Real Constitutional Spirits – No Maidstone' and the letters MT (empty). On the horizon we see calmer waters and the rising Sun with the inscription 'Power.' The rays of the Sun are 'Cheese Parings,' 'Candle Ends,' 'Pluralities,' 'Dissipation,' 'Sensuality,' 'Libertinism,' 'Private Pickings.' The scene implies that the new ministry has thrown out an empty cask (supposed to represent the promises of the Whigs), and the wind from the cherub will save the boat from the whale and allow it to reach the calmer waters near the horizon.

Swift explains the title of his book A Tale of a Tub in his preface:

At a grand committee, some days ago, this important discovery was made by a certain curious and refined observer, that seamen have a custom when they meet a Whale to fling him out an empty Tub, by way of amusement, to divert him from laying violent hands upon the Ship. This parable was immediately mythologised; the Whale was interpreted to be Hobbes's 'Leviathan,' which tosses and plays with all other schemes of religion and government, whereof a great many are hollow, and dry, and empty, and noisy, and wooden, and given to rotation. This is the Leviathan from whence the terrible wits of our age are said to borrow their weapons. The Ship in danger is easily understood to be its old antitype the commonwealth. But how to analyse the Tub was a matter of difficulty, when, after long inquiry and debate, the literal meaning was preserved, and it was decreed that, in order to prevent these Leviathans from tossing and sporting with the commonwealth, which of itself is too apt to fluctuate, they should be diverted from that game by 'A Tale of a Tub.' And my genius being conceived to lie not unhappily that way, I had the honour done me to be engaged in the performance.

This is the sole design in publishing the following treatise, which I hope will serve for an interim of some months to employ those unquiet spirits till the perfecting of that great work, into the secret of which it is reasonable the courteous reader should have some little light.

This print, published on March 14, 1806 by Hannah Humphrey of 87, St. James's Street, was created by James Gillray.

The British Museum: Prints and Drawing Department, 1868,0808.7430.
Looking for a high-resolution scan of this?