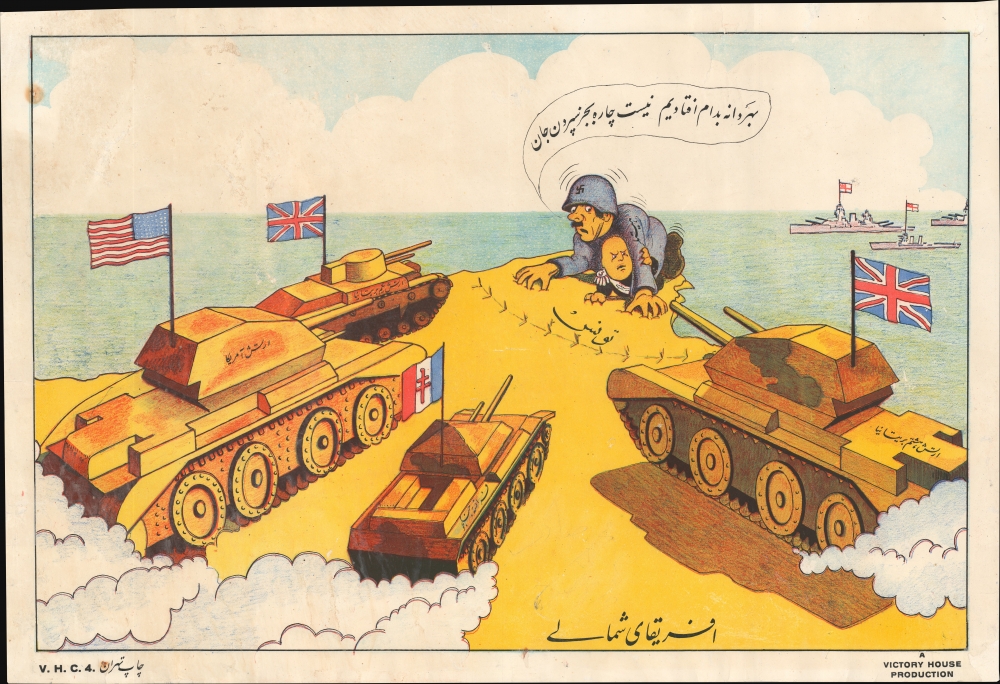 The only known surviving example of a 1943 propaganda broadside issued in Tehran, Iran, by Victory House - a propaganda arm of the British government operating in Iran during World War II (1939 - 1945). It is part of a series of extraordinary broadsides issued by the pro-British Victory House to sway Iranian political sentiment towards the Allies by promoting a message of inevitable victory. The image here illustrates American, British, and Free French tanks surging towards the fortified northern top of Tunisia, where Hitler and Mussolini cower as a fleet of British battleships approach from the sea - imagery representative of the Tunisian Campaign, which when this was issued early in 1943, had driven the German/Italian Afrika Korps to a last stand.

With its enormous size, strategic central location, and rich oil reserves, Iran was considered the key to controlling western and central Asia, a fact lost on neither the Allied nor Axis powers. After decades quasi-colonialism and economic bullying over oil, the Iranian populace maintained a decidedly negative option of both Britain and their Soviet-Russian allies. Moreover, although Iran declared itself neutral out the outset of World War II, the Shah, Reza Shah Pahlavi (1878 - 1944) was rumored to be pro-Germany. To prevent Iran's critical resources from falling into Axis hands, and to secure Allied 'Persian Corridor' supply lines to Russia, Britain and Russia jointly launched Operation Countenance, the Anglo-Soviet Invasion of Iran (August 15 - 31, 1941). Overmatched, Iran capitulated without a struggle, formally agreeing to surrender. The Pro-Axis Reza Shah forcibly abdicated in favor of his pro-Allied son, Mohammad Reza Pahlavi (1919 - 1980) - who became last Shah of Iran.

Despite the invasion, Iran remained officially neutral and the populace generally anti-Anglo-Soviet. Recognizing a propaganda battle, Britain sized the former 'German Cultural Center' turning it into Victory House, ostensibly a 'British Cultural Center', but in fact a well-funded and sophisticated propaganda machine. The British correctly realized they had little hope of converting the hearts and minds of Iran, so they instead focused on proselytizing a message of inevitable Allied Victory.

Victory House established its own in-house press, which began publishing brightly colored visually impactful broadsides promoting their agenda. Although most featured some Farsi text (as with the present example) the content was easily interpreted visually - accounting for Iran's less than 10% literacy rate. These broadsides, while striking productions of the highest quality, are as a group exceedingly rare and known more anecdotally than from surviving examples. The present map being a notable surviving example.

The efforts were effective. On September 9, 1943, Iran declared war on Germany. Shortly after, on November 28, the 'Big Three' leaders met in Tehran. United States President Franklin Roosevelt, British Prime Minister Winston Churchill, and Soviet Communist Party General Secretary Josef Stalin signed the 'Declaration of the Three Powers Regarding Iran' an agreement guaranteeing economic assistance to Iran during and after the war.

Erwin 'Desert Fox' Rommel (1891 - 1944) and his famed Afrika Korps initially met with a great deal of success in north Africa, coming close to taking Alexandria. Their drive through Africa was abruptly halted when they suffered a crushing defeat at the Second Battle of El Alamein (October 13, November 11, 1942). After El Alamein, a coalition of British, Free French, and American forces drove the German and Italian armies steadily westwards, ultimately forcing them into a small pocket of fortified territory in northern Tunisia - as illustrated on this broadside. In early May 1943, shortly after this broadside was printed, fighting in North Africa came to an end. Over 230,000 Germans surrendered, becoming prisoners of war.

This chromolithograph map was printed by Victory House Press in Tehran, Iran, in April or May, 1943. It is the only known surviving example.

Victory House Press (1941 - 1945) was a British anti-Facist propaganda press based in Tehran, Iran, during World War II. Victory House was headed the Persianist Dr. Ann Lambton (1912 - 2008). It was founded in the wake of the Anglo-Russian invasion of Iran on 25th August 1941. While it was loosely described as a 'British Cultural Center', the true aim was to sway the hearts and mind of the Iranian population toward the Allied cause. Intentionally, Victory House was based in 'Brown House', formally the German Cultural Center, which was seized in 1941. Victory House established its own press, publishing the Farsi language newspaper Rahbar (Leader) and the English language Tehran Daily News. The organization also issued propagandist pamphlets and broadsides. Learn More...