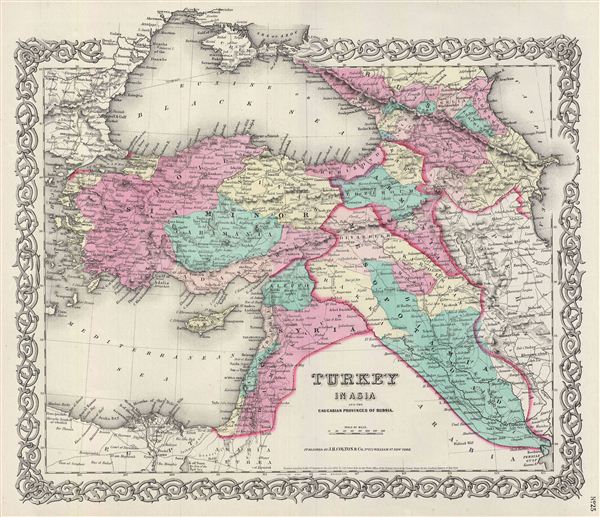 An excellent 1855 first edition example of Colton's map of Turkey in Asia and the Caucuses. Like most of Colton's Asia maps, this map was derived from an earlier wall map of the world produced by Colton and D. Griffing Johnson. Covers from the Crimea south to the Nile Delta, west as far as the Aegean, and east to the Caspian Sea and the Persian Gulf. The map covers the mid-19th century Asian claims of the Ottoman empire, including the modern nations of Turkey, Iraq, Kuwait, Syria, Jordan, Israel or Palestine, Armenia, Georgia, and Azerbaijan, as well as parts of adjacent Iran, Greece, egypt and Ukraine.

The map made during the last days of the Ottoman empire, whose influence, though rapidly declining, still dominated much of the Middle east. As this map was drawn this region was in the midst of the Crimean War, a conflict between the allied forces of the British, French and Ottoman empires against the Russian empire. One of the lesser known, but significant achievements of the Crimean War was laying of an underwater telegraph cable between Varna in european Turkey to Balaklava in Crimea. This 300 mile cable, the longest at the time, enabled almost instant communication between the British and French forces. This map identifies the telegraph and marks the date of first message from Balaklava, 1855.

The map also identifies various cities, towns, rivers, rapids, mountain passes, and an assortment of additional topographical details. The 1854 Battle of Balaclava, fought during the Crimean War, is noted. Map is hand colored in pink, green, yellow and blue pastels to define national and regional boundaries. Surrounded by Colton's typical spiral motif border. Dated and copyrighted to J. H. Colton, 1855. Published from Colton's 172 William Street Office in New York City. Issued as page no. 25 in volume 2 of Colton's 1856 Atlas of the World.