1852 Lavasseur Map of Turkey in Asia 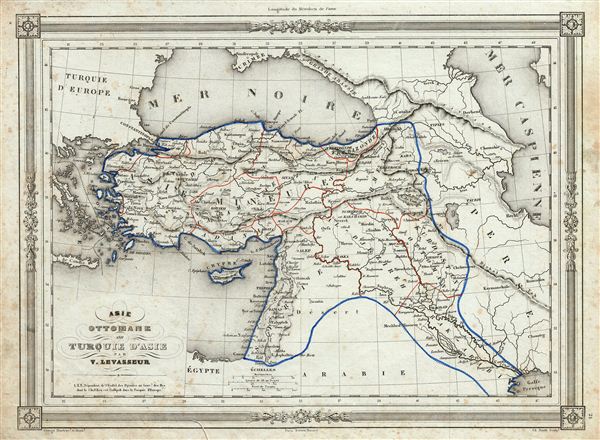 1852 Lavasseur Map of Turkey in Asia

An uncommon and extremely attractive 1852 map of Turkey in Asia by Victor Levasseur. The map covers the Asian territories claimed by the Turkish Ottoman empire c. 1850 from the Black Sea to Arabia, including Cyprus. Centered on the Holy land (Palestine / Israel), the map covers the modern day countries of Turkey, Cyprus, Iraq, Israel, Palestine, Jordan, Lebanon, and Syria. Throughout, the map identifies various cities, towns, rivers and assortment of additional topographical details. The map to the last days of the Ottoman empire, whose influence, though rapidly declining, still dominated much of the Middle east. The map features a beautiful frame style border. Prepared by Victor Levasseur for publication as plate no. 21 in Maison Basset's 1852 edition of Atlas Illustre Destine a l'enseignement de la Geographie elementaire.