1856 Colton Map of Turkey in Europe, Macedonia, and the Balkans 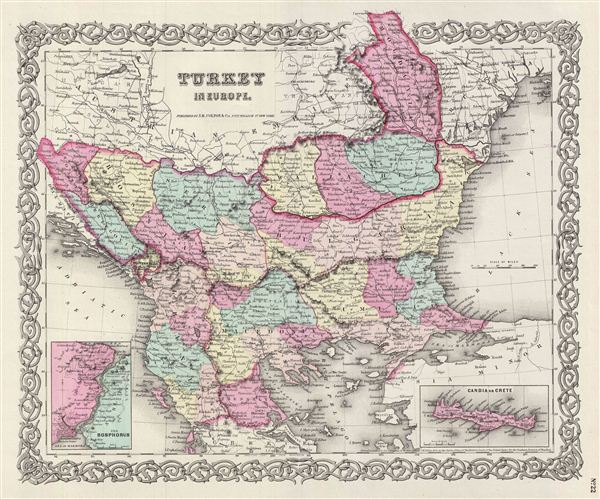 1856 Colton Map of Turkey in Europe, Macedonia, and the Balkans

An excellent 1855 first edition example of Colton's map of european Turkey. Like most of Colton's europe maps, this map was derived from an earlier wall map of the world produced by Colton and D. Griffing Johnson. This map, made when the Ottoman empire controlled much of the region, covers what are today parts of Greece, Turkey, Macedonia, Albania, Bosnia, Serbia, Croatia, Bulgaria, Montenegro, and Moldova. An inset map in the lower left quadrant details the Bosporus and Istanbul (Constantinople). Another inset map, in the lower right, focuses on the island of Candia or Crete.

This map depicts the waning years of Ottoman hegemony in the region, with the Greek Independence movement achieving Peloponnesian soverignty in 1821. The Ionian Republic, under the protection of Great Britain, was also free of Ottoman control. The other Grecian and Balkan states, including Serbia, Croatia, Moldavia, Wallachia, Albania, and Macedonia, remained at least nominally under Ottoman control until 1878.