1794 Laurie and Whittle Map of Greece, Turkey and the Balkans 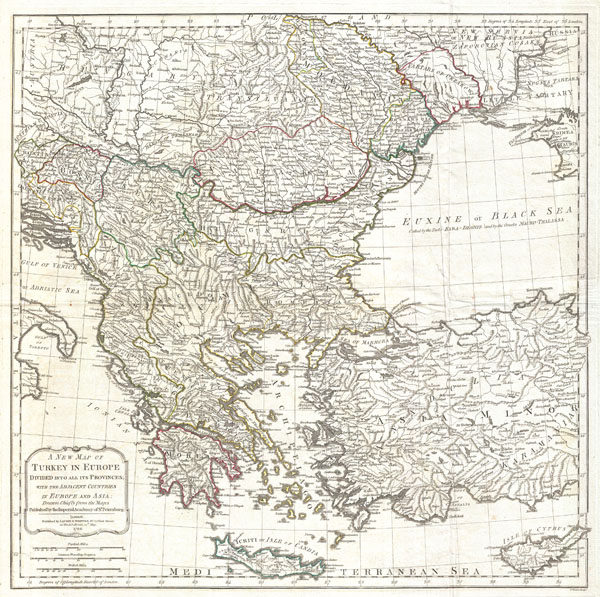 1794 Laurie and Whittle Map of Greece, Turkey and the Balkans

An extraordinary large format 1794 map of Greece, Turkey in Europe, the Balkans and adjacent regions by Laurie and Whittle. Map covers from the Gulf of Taranto, Italy, eastward as far as the Crimea, extend northwards to Transylvania and Moldova and southwards as far as Crete and Cyprus. Includes the modern day nations of Greece, Turkey, Cyprus, Bosnia, Croatia, Albania, Serbia, Macedonia, Bulgaria, Hungary, Rumania, Bulgaria, Moldova, and parts of Italy, Austria and the Ukraine. Offers extraordinary detail throughout, noting cities, roads, geographical features, and sub-states. Based on survey work originally completed in 1789 by the Imperial Academy of Sciences in St. Petersburg. Prepared and published by Laurie and Whittle as plate no. 24 in the 1797 edition of Thomas Kitchin's General Atlas.